12 Simple Tips for Fauxtographing Your Children

So you're not a professional photographer. But who says you can't pretend? Be your own fauxtographer and set up a photo shoot with your kids.

Fauxtographer is a term generally used as an insult by the threatened-photographer crowd (the same people who insist you order professional prints from them because you obviously don't know how to use adoramapix.com to order good quality photos yourself). But my friends and I use it jokingly, to convey the idea that although we are not pro photographers, and we know we're not, we try to take the best pictures we can and strive to learn new things each time we pull out our cameras.

We set up little photoshoots with our children in special locations, for holidays, or with themes, or just snap away when they're doing normal daily activities.

And you can too.

Save your family photographer budget for times when you want to be included in most of the pictures. Learning how to photograph your own children (or fauxtograph them) will not only be a fun hobby, but it will also save you money and give you another way to connect with your kids. Plus, it keeps these memories intimate, since you don't have a third party doing the clicking. 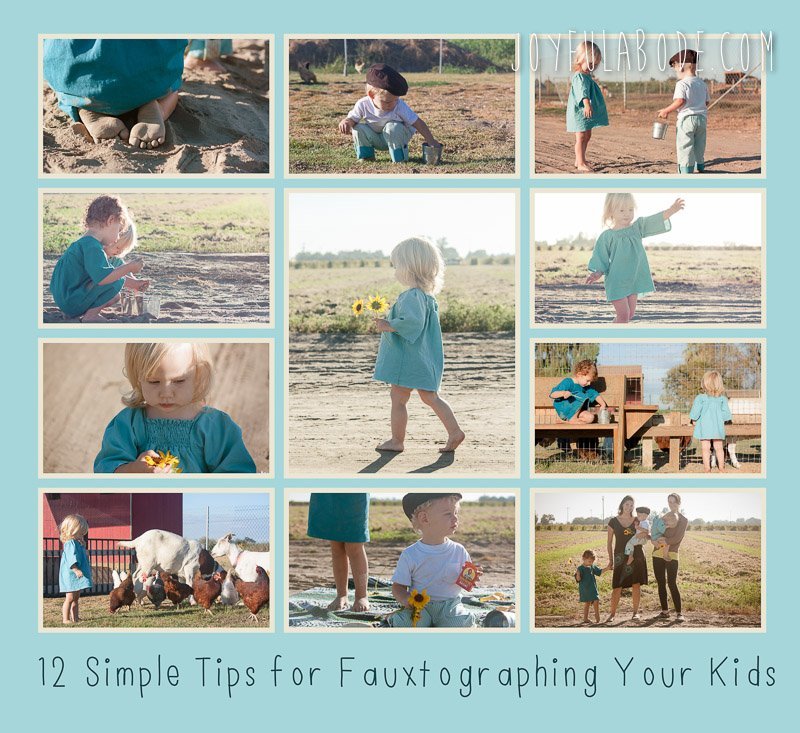 So here are 12 simple tips that will help you when you're photographing your children.

I set up this special farm photo shoot for my kids and their best friend, since our family is moving across the country soon, and we will all miss each other. I wanted to make sure they had a fun time together, and that we mothers have these photographs of our children, to preserve so many special memories.

You can choose the perfect location, but if your kids are bored, you won't get anything good out of the shoot. Now, this doesn't mean you should bring their entire toy chest full of electronic light-up plastic. It means pick a couple of things that fit with the theme of your shoot, and go from there. For the farm, I brought a few galvanized pails. The kids walked around swinging them, filled them with rocks and dirt (and, if I'm being honest, chicken poop), and wore them as hats.

My friend Heather also brought a blanket for the kids to sit on in some of the pictures. That's always a good plan when outdoors!

I also do this when I'm meeting up with Real Photographers. For one of our family shoots when Anneliese was a baby, I brought our wooden rocking horse, a few favorite books of hers, and a large basket. Photographers usually appreciate when you bring your own ideas and a few props, because it does make the sessions so much more interesting and successful. 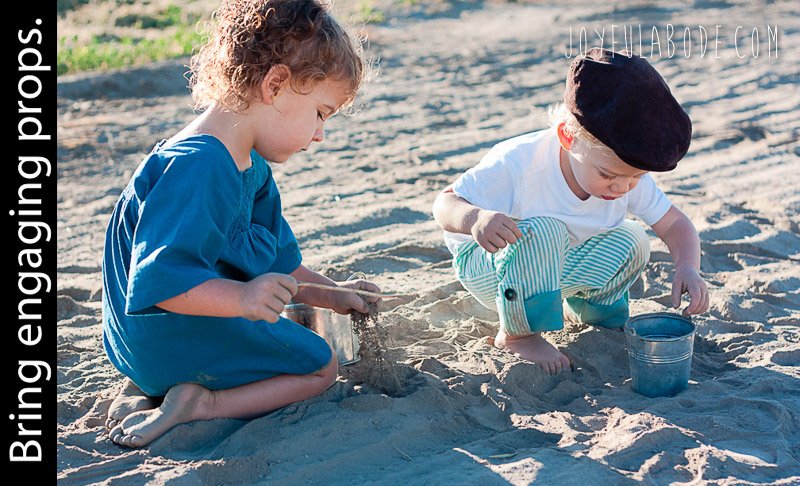 Don't keep yourself limited to your own props from home. We found some beautiful sunflowers that added wonderful pops of color to some of our pictures! Other on-site props you could use? Pine cones, twigs, autumn leaves, interesting rocks, and so on. It doesn't have to be, “Here, hold this thing.” Instead, let your child explore the exciting things you find together! 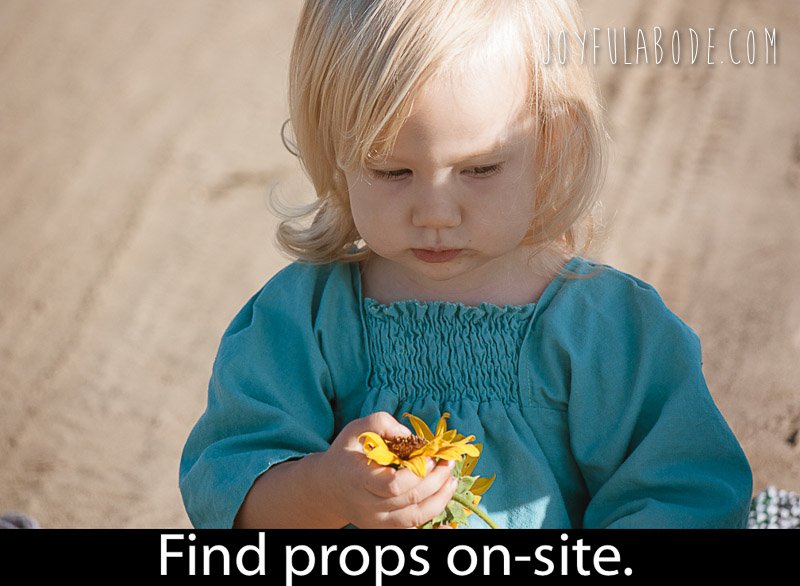 3. Step Back and Observe Their Play.

I hoped the kids would play Ring Around the Rosie, which they love. They didn't during our shoot. They did later, at breakfast, when I didn't have my camera. It would have been adorable if they played patty-cake together, or peek-a-boo with each other. But do you know what? That's not how play works. Play is child-initiated in most cases, and saying, “Hey, play this game I want you to play” doesn't usually pan out. Just take a step back, and see what they come up with.

Just like the newborn photographer who takes macro shots of your sleeping baby's ear, toes, or eyelashes, a mom fauxtographer can draw attention to the things SHE loves by focusing on them and composing images around them. I ordered gorgeous handmade leather boots for my kids for this photo shoot. They didn't come in time.

I thought bare feet would be perfect for the style of photographs I was going for, but didn't think Anneliese, who loves cleanliness and order, would go for it. When we got into the car, she told me, “I don't want me feet on the soil!” so we brought 2 pairs of shoes to choose between when we got there. But once we arrived, she announced to me, “I DO want my feet on the soil!”

So these little dirt-covered toes? So special to me. They stand for my daughter breaking free of her usual “rules” for herself and trying something new. Only her mother (that's me) could have known. A photograher wouldn't have realized how special these filthy feet were. That's why fauxtography is so important. You can capture the details that are most important to YOU. 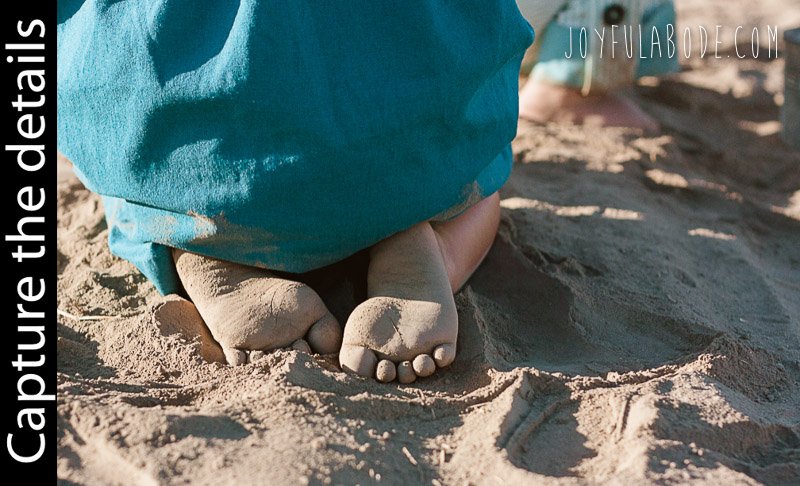 Well, I can't say I NEVER try to get the kids to look at the camera. But sometimes (most of the time) it's nice to just let them do their thing. And if you need to run around to get their face in a shot, do it. Because the photos will be so much more natural without the deer-in-headlights look most kids give the camera when commanded to turn “this way.” 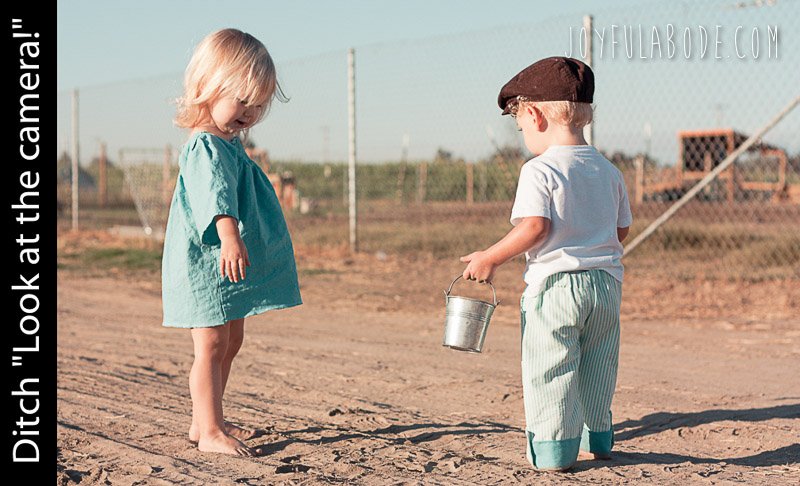 Even if your photo shoot was meant to be siblings-together or friends-together, don't put too much pressure on them being TOGETHER at all times. Sometimes the solo shots are just as sweet. They're all part of a bigger memory of the day, but individual personalities really shine through when you take a look at EACH child through your lens.

Try not to have the kids on the same plane, at the same height, in every shot. Lined-up kids are certainly adorable, in a Matryoshka sort of way. But it's interesting to have a child further away and two children closer. Or have one on the ground, and another standing on a bench. Think of it like arranging a centerpiece or decorating your fireplace mantle. If everything is the same height all the time, it gets pretty boring. 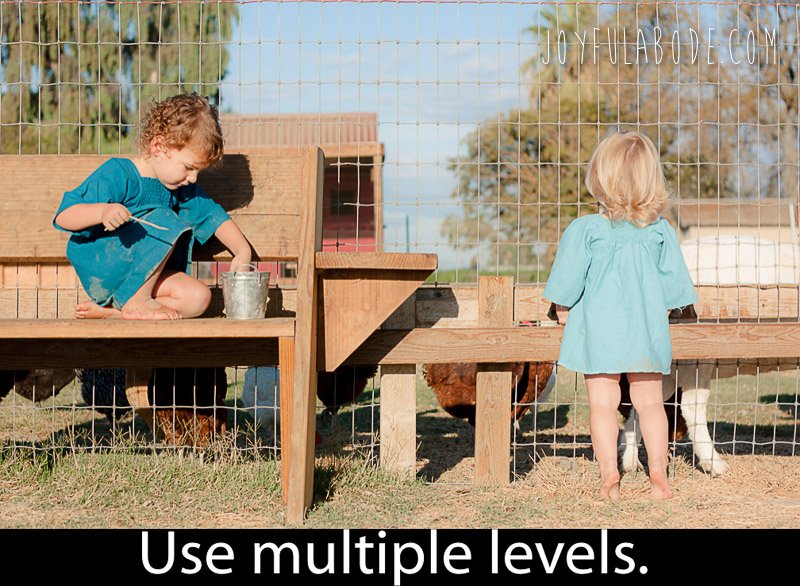 I'm guessing if you're reading this and you're a mom, I really shouldn't have to tell you this. But always. Always. Bring. Snacks. Snacks are not optional. Especially if you are up early to catch lovely morning light, or out in the Golden Hour, making dinnertime delayed. About 2 minutes before I took this picture, I think everyone was crying. Snacks fixed that, and after a nice picnic, we got a few more captures before cleaning up and going to breakfast together. 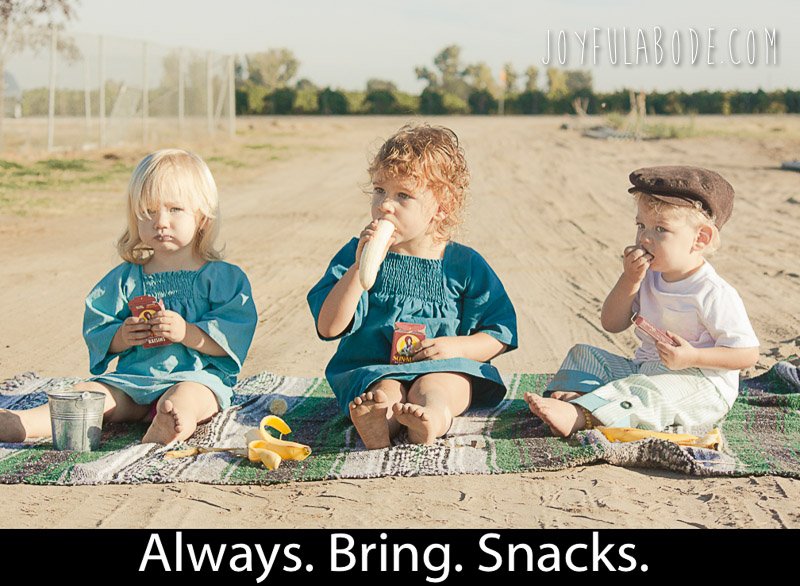 9. Get Down on Their Level.

Not only will you see the world how they see it, but you'll give your children the straight-on perspective that makes them look bigger. More important. And it creates an instant emotional connection between the viewer and the subject (your child).

It's amazing how just a little laziness or forgetfulness on the part of the fauxtographer can result in dozens of not-quite-right pictures. Always be mindful of your angles. This doesn't mean you ALWAYS have to be on the child's level, or that a photograph can't be good from another angle (it SO can) but so many times, it makes the picture. Don't be scared to bend your knees. Or kneel. Or lie face on your stomach on the ground if you need to. 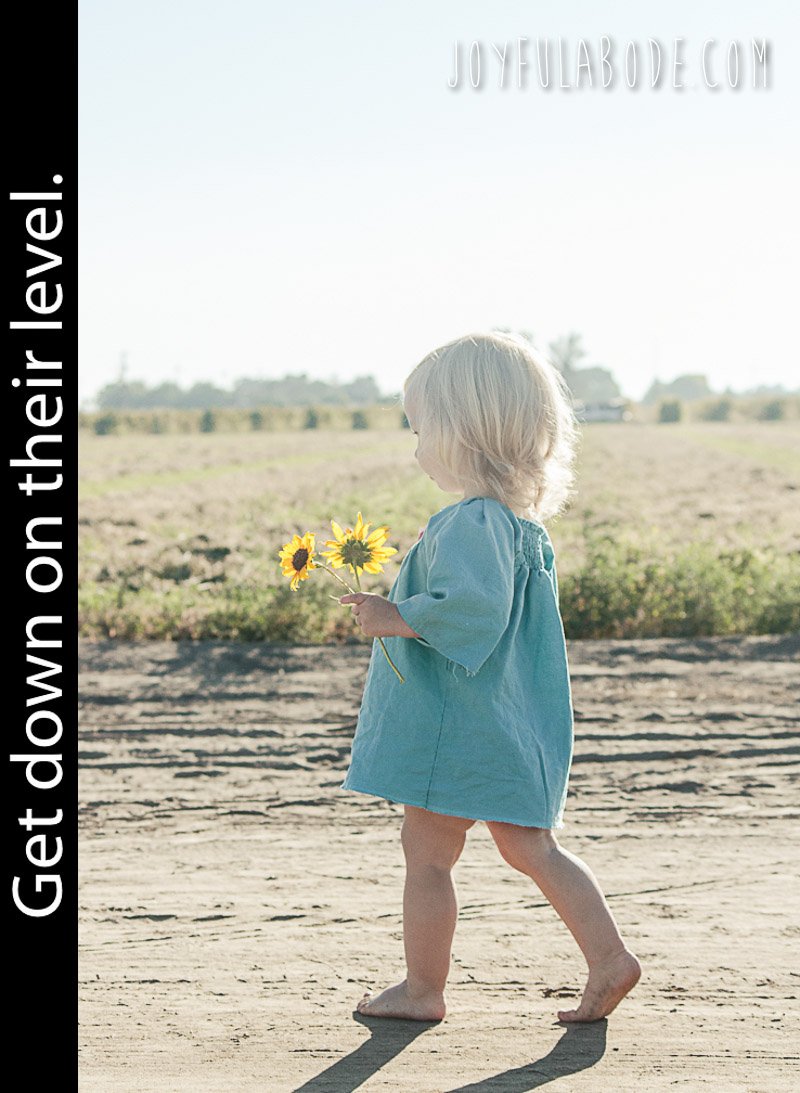 This could go under tips 3 and 5, but I feel like it deserves its own. When the children are interacting with each other in a genuine way, be sneaky with your camera. Try not to let them see that you're taking pictures (not in a creepy way). Don't interrupt them. Don't tell them to look at you. Capture the unadulterated connection. The way people interact is the essence of the relationship. It's so special to be able to preserve it.

Just another benefit of being a mom fauxtographer is that your children are completely comfortable around you (and probably around your camera too), so they act naturally. With a professional photographer, the children might be uneasy, tense, or anxious, unless the photographer is very good at “disappearing” (and a photographer who can make herself invisible is worth her weight in gold, by the way). 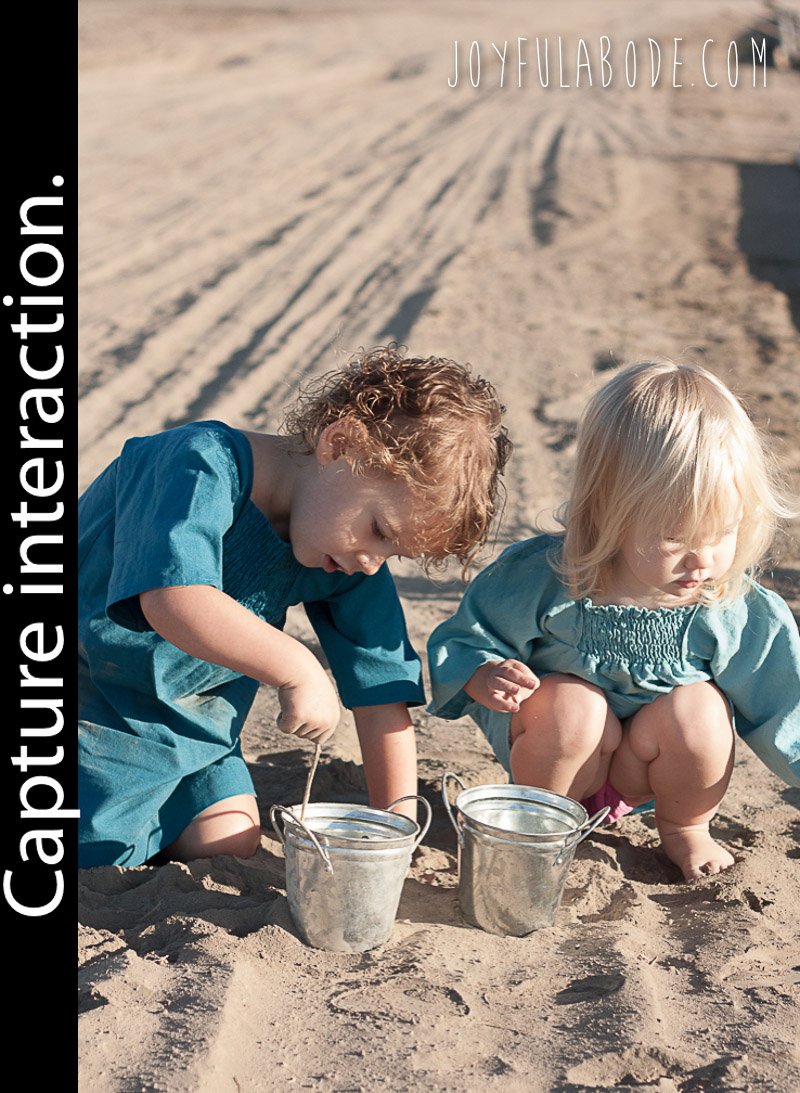 Anneliese NEEDS three band-aids on her leg right now because of a tiny scrape she has that is neither open nor bleeding. If she doesn't have them on her leg, she limps around like an invalid, because she can SEE the scrape. It's a tragedy. I thought the pictures would be nicer without the copious amount of band-aids, but guess what. That isn't life.

Refer to tip 8, and know that red boxes of raisins were in every picture moving forward from The Breakdown. I thought it was beginning to look like I was shooting for a California Raisins magazine ad. But guess what. That IS life.

And letting go of “perfection” can be a really wonderful way to see that what you have? Well, it's…perfection. 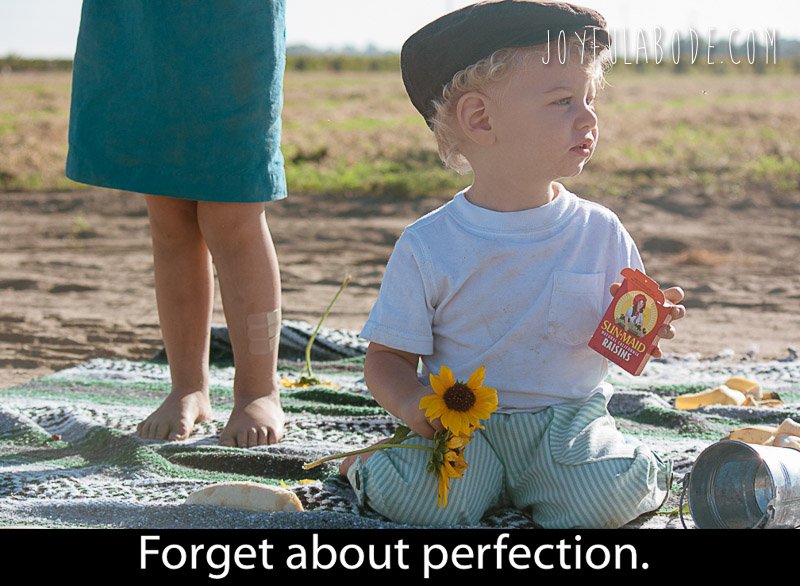 While the kids are all dressed up, and you've got your Big Camera out, and everyone is feeling decently warm toward the camera (or at least accepting that photos are what we're doing right now), go ahead and set up a picture (or two) that has YOU in it. You'll need a timer on your camera, and/or a remote. But the minor annoyance of running back and forth a billion times, or trying to hide the remote within 2 seconds of pressing the 2S button is so worth the effort.

Sometimes, it's nice to be on the OTHER side of the lens. Because you were there too. And you're important. 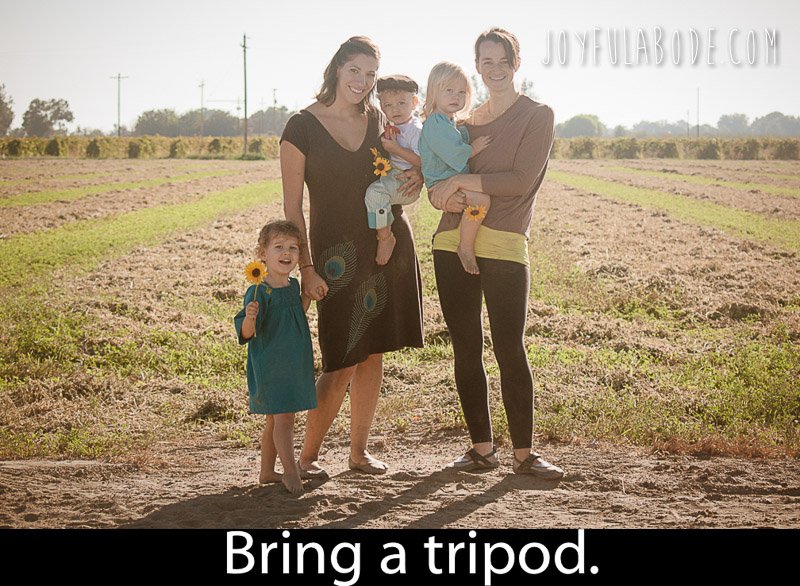 I hope these tips have helped you realize that most of what you need to photograph your children, you already have. Observation, knowing the important details, patience, and perspective all go a long way toward helping you capture the memories you never want to forget.

No photographers were harmed in the making of this post.