Yesterday I hit 20 weeks in this pregnancy. A lot of people will say, “Wow, 20 weeks! You’re halfway through! But that’s only part true… while a pregnancy may last 40 weeks on average, for some reason (as I mentioned before) it’s measured from the first day of the last menstrual period, so for the first 2 weeks, you’re not actually pregnant. Then, I didn’t know I was pregnant until Week 6. So as far as “feeling pregnant” goes, this is only week 14 for me. Out of 34 weeks (based on a 40-week pregnancy, finding out at 6 weeks) that I will “feel pregnant” total.

Technicalities aside, I can see that I don’t have much longer to get ready for this baby! I’m so nervous because I haven’t found a Bradley class to take yet (recommended by my midwife, and I really want to find one to enroll in) or done much in the way of preparing the baby’s room or any of that. We don’t have a car seat or a bed or a dresser for the baby… so why is a prenatal massage on the top of my list of “things to do for the baby?” Haha!

This week we’ve started preparing our garden for the spring, and even bought a few plants (though the Lowe’s guy said they’ll have lots more to choose from in 2 weeks, so we’ll have to go back then). We’ve also talked about (though not done much about) preparing for a yard sale to get rid of some of the clutter taking up space in the house and garage. Also, since we know we’re going to move (whether into base housing or across the country) a few months after the baby is born, there are some things I can start packing already… mostly my child development materials which I’m not using now since I’m working outside of my home as a nanny, rather than doing childcare here. That doesn’t sound like much since it’s just one “category” of things, but it’s a LOT of things that I can pack up and it will free up some space for us! 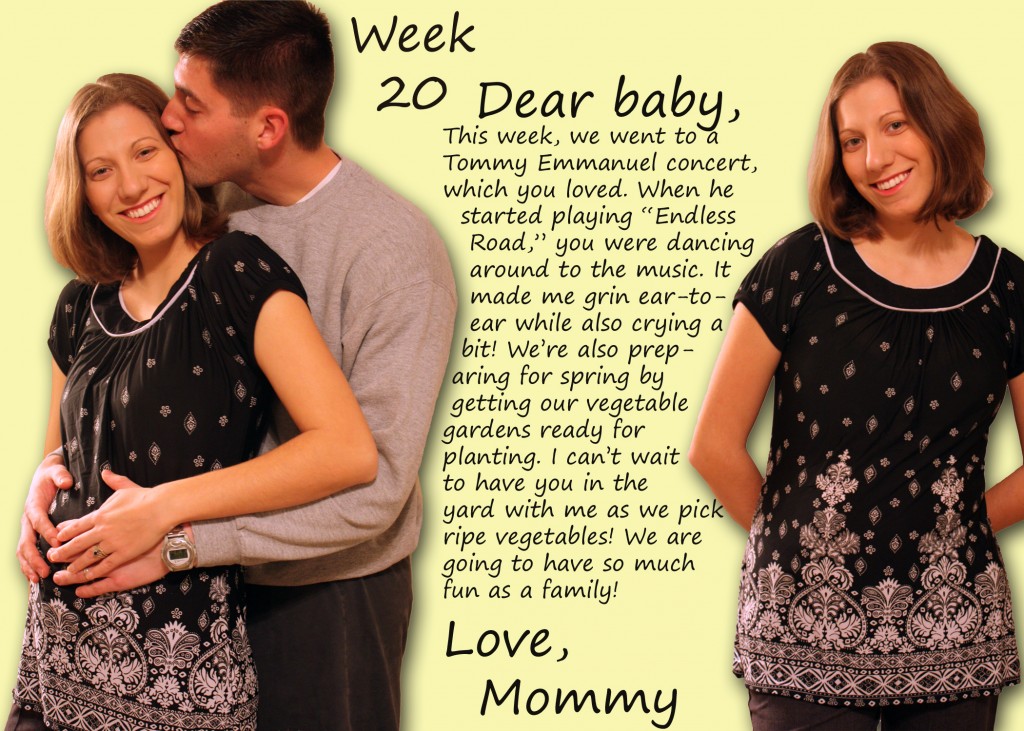 So this Tommy Emmanuel concert? Holy crud… there are no words.

If you’re a fan of music or fingerpicking or guitars in general or even just a person with ears… Tommy Emmanuel will amaze and delight you. As a musician he is beyond talented, and as a performer, he is incredibly engaging and entertaining.

My dad is a huge fan of his and sent me an email a little bit ago saying that he was going to be performing near me and to QUICKLY buy tickets. Of course I jumped on it (since I’m also a huge fan) and got the last pair of “Golden Circle” tickets (first five rows) for his Tuesday performance at Orange Blossom Junction in Exeter, CA.

We didn’t really know anything about the venue, so we arrived all dressed up, possibly a bit overdressed. I didn’t mind though. It was our first big Valentine date *ever* (not counting military balls) and CERTAINLY a special occasion for us – celebrating our couplehood, our growing family, and our first Tommy concert! 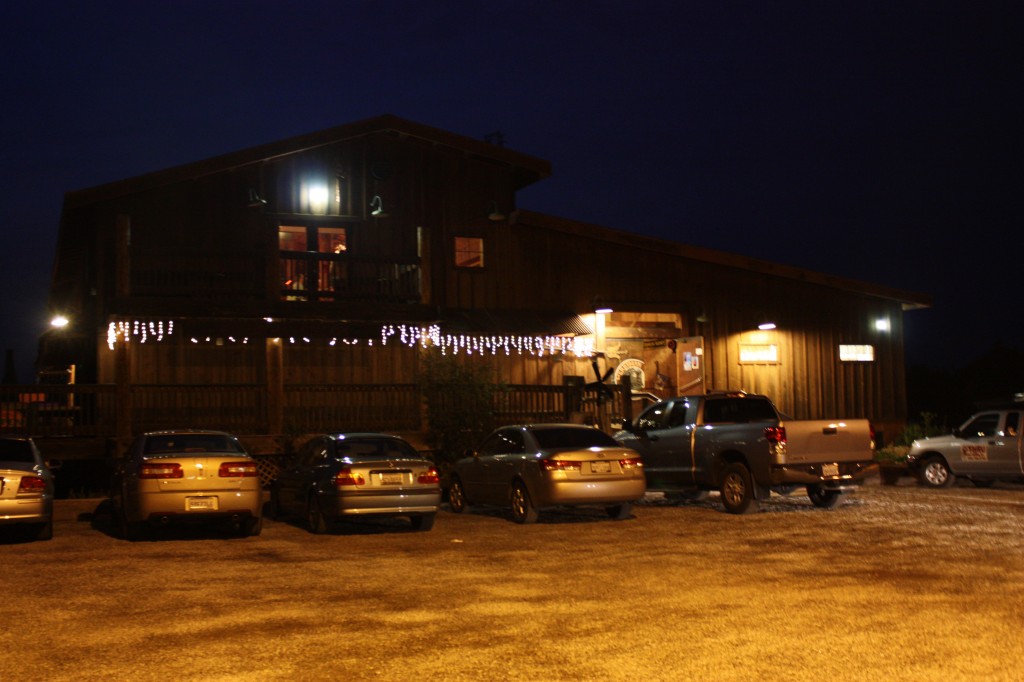 Evidently this is the smallest venue in the WORLD where Tommy Emmanuel plays, by 300-500 seats. It was like sitting in a living room with a bunch of good friends… quite intimate. I feel VERY lucky (and we were in the 3rd row, a bit right of center). 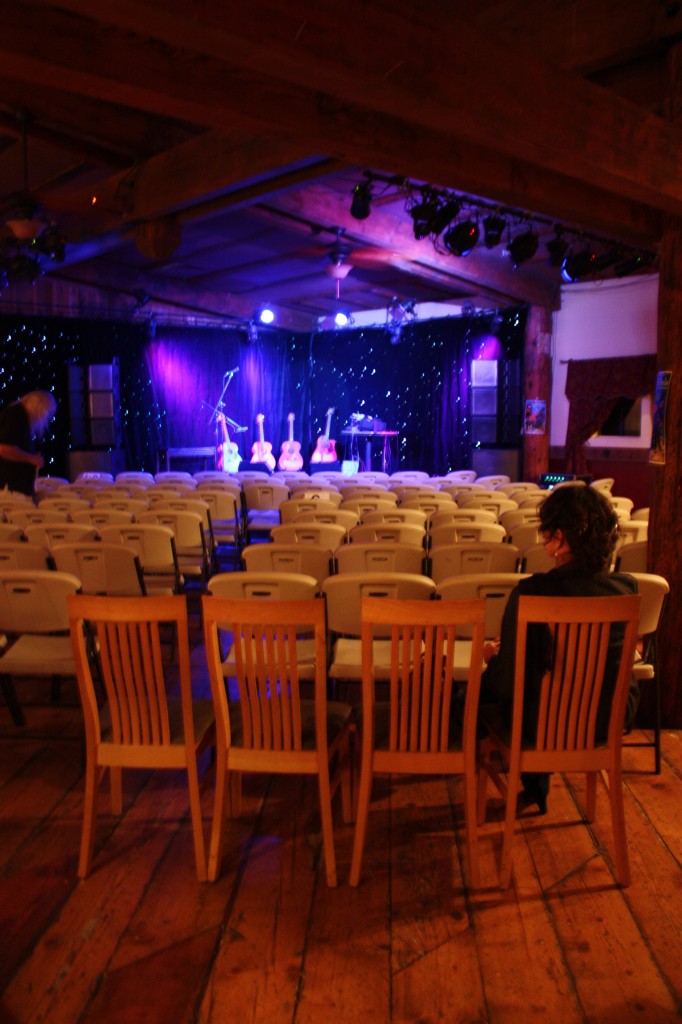 We got a nice lady to snap a photo of us, and then we headed upstairs for dinner before the show. 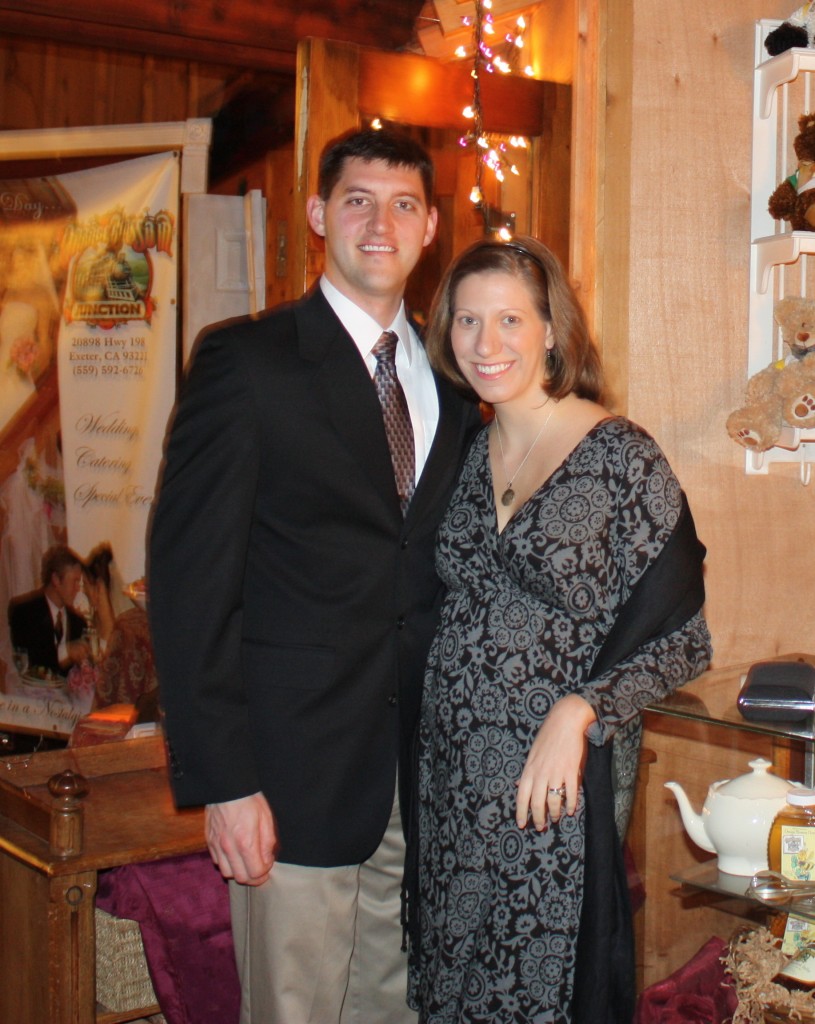 The dining room was maybe a bit TOO intimate for my liking. Our table was maybe 4 inches away from the next table (on both sides). But the food was quite delicious and unique (the crab cakes with bay shrimp were delicious, and the homemade Cabernet ice cream was amazing) which made up for the squished-ness a bit. (See in the foreground of this picture? It looks like a line down the middle of the tablecloth, but those are 2 separate tables VERY close to each other, each for a separate couple who don’t know each other. Oh, well.) 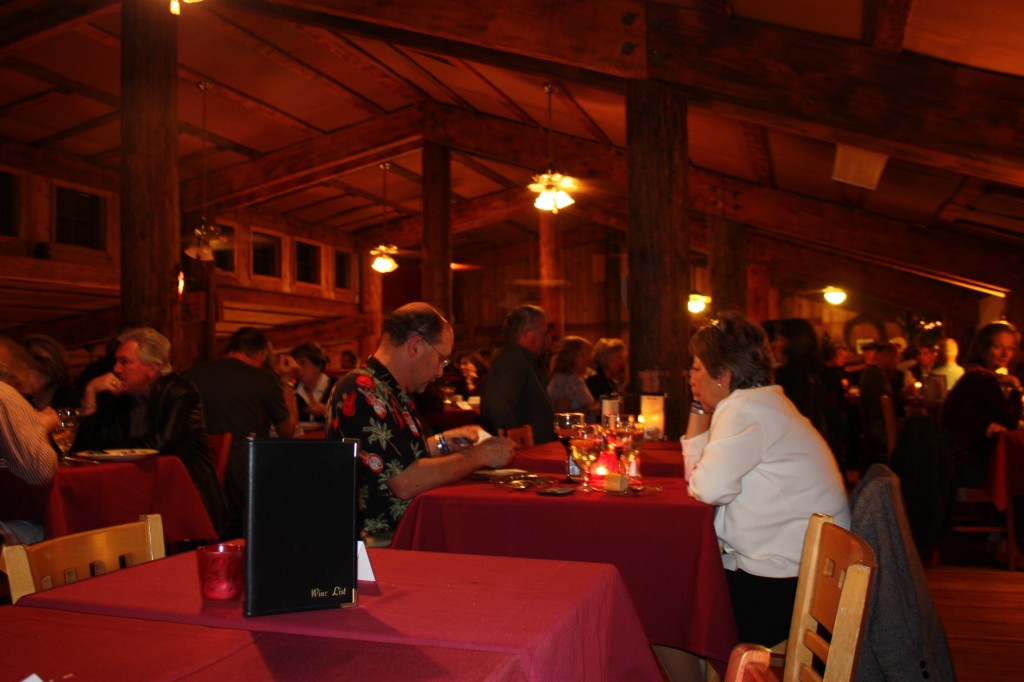 He was a little embarrassed that I wanted to take a picture in the dining room. 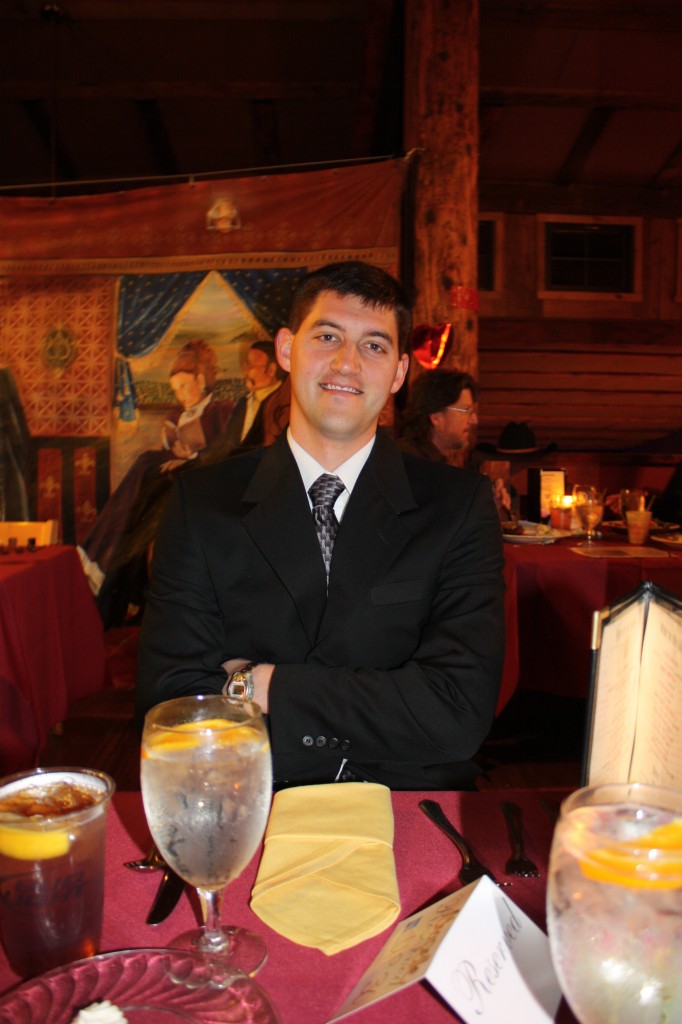 But I didn’t mind… sometimes I’m embarrassing, and he knew that getting into this. 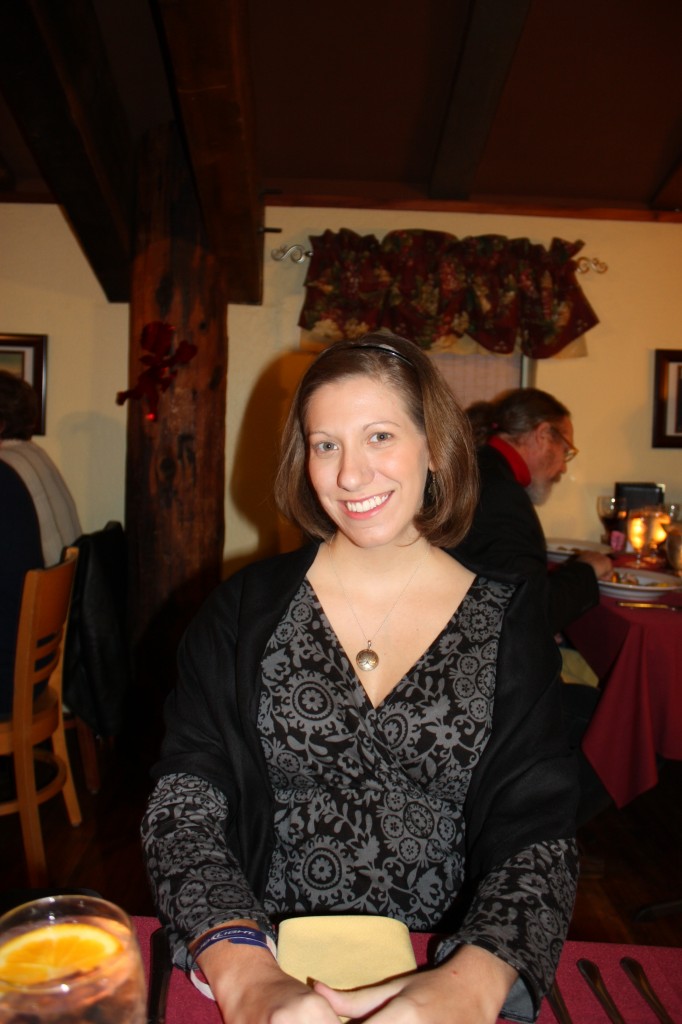 After dinner, we headed downstairs to grab our seats for the concert, and snapped a quick photo with Tommy’s guitars before we put the camera in the car (no photography allowed during the show). 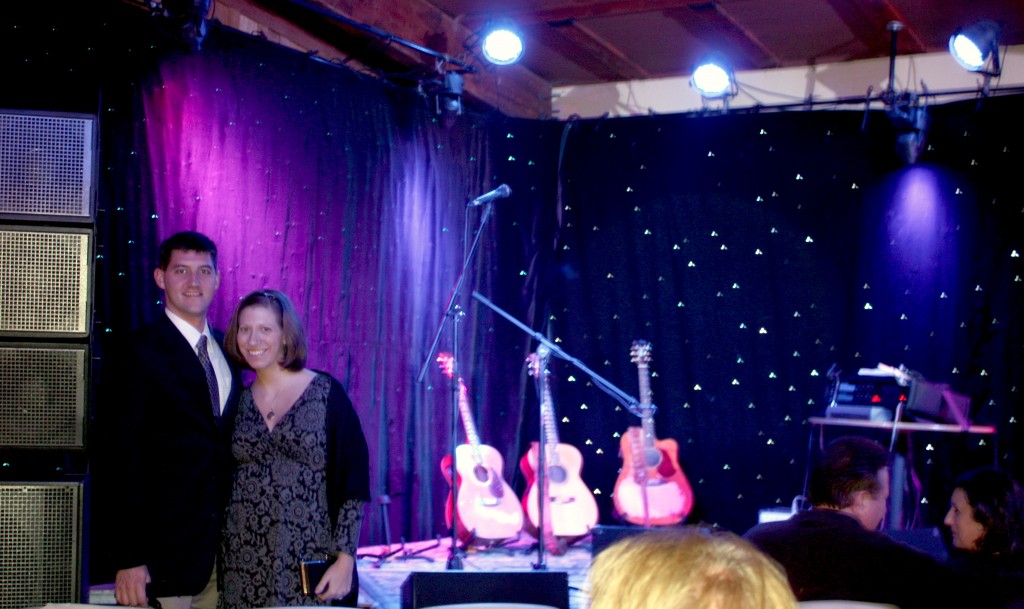 This is the song (not my video, not from this concert) that the baby started moving around during. I was grinning like an idiot while choking back tears. It was the most intensely emotional moment… Endless Road:

I also LOVED this song, which will be on his new album (I think that’s what he said). Halfway Home:

And this one, Haba na Haba (Little by Little):

So enough of that… on to the Primal Chicken Fingers. And sorry, there are no photos. I made them tonight and they were so simple, but too good not to share!

At first I was disappointed that the outsides didn’t crisp (though I could’ve crisped them in a pan no problem) but the flavor? Out of this world. We will definitely make them again! VERY yummy.