Anneliese loves to read. From the moment she wakes up to just before bed, she loves to carry books around, flip through their pages and study the pictures and the letters that make up the words which make up the stories. She’s fascinated with them. She’s enthralled by the tales. Captivated by the illustrations. “Book” was one of the earlier words she learned in sign language, so she could ask her dad and me to read to her before she could even talk.

So she’s decided to start a book club. Each month, (possibly more often) she will recommend a set of books for you and your kids to enjoy together. 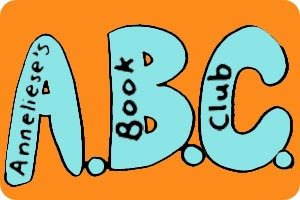 This month’s theme is airplanes. It’s no surprise that we have tons of airplane books in this house, since my husband is a pilot. These are the ones that were easy to round up. Several are newer, which she received for her birthday, but we’ve had some of them for a year or longer. 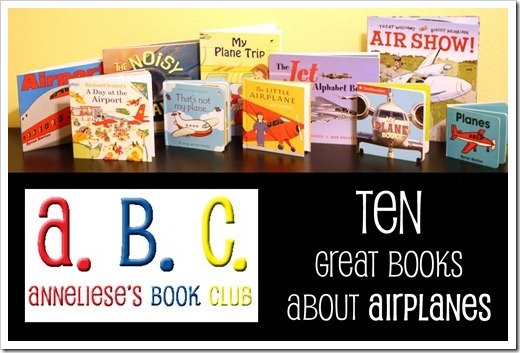 We’re getting ready to take a cross-country trip to visit family soon, and while it’s not Anneliese’s first trip, she was more of a baby and less aware of what was going on before. Now that she’s a Big Toddler, I thought adding some airPORT books to her library of airPLANE books would be a good idea for preparing her for the journey ahead.

As Anneliese says, “Ready? Get set… Let’s go!” (a quote from one of her Babar books) 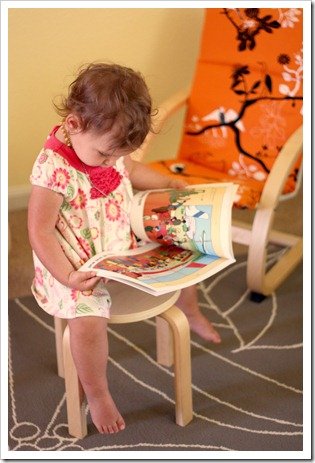 This book will introduce young readers to 26 kinds of jets, with tons of fun facts and historical tidbits along the way. Still, it manages to not get TOO deep or wordy, so even the littlest aviation enthusiasts can enjoy it. I’m sure when the kids are older, it will spark a lot of questions (which I’ll be able to direct to my husband.) 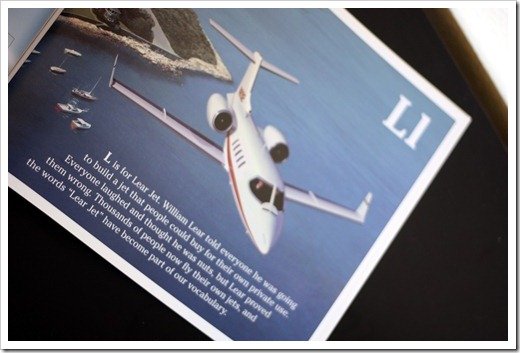 This coloring book is filled with line drawings that are detailed enough to be interesting, but not too detailed to interfere with actual coloring (some coloring books are awful about that!). It tells the story of a young family taking a trip together, from arriving at the airport and weighing their luggage to getting snacks and drinks on the plane, landing, and finding a bus. This one will be in Anneliese’s little back pack along with some crayons, so she can color during our trip. 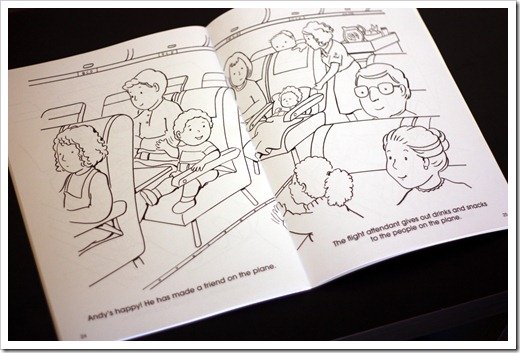 3. The Little Airplane written and illustrated by Lois Lenski

This book is ridiculously charming. The illustrations are super sweet… I want to frame each one of them and hang them up in my house. The text is excellent too. I love that it doesn’t “talk down” to kids, but gives them ALL the details of Pilot Small’s flight, from checking the engine and filling up with gas to banking, doing loops, and even an emergency landing to unclog the gas line. I feel like I could fly a plane after reading this one. 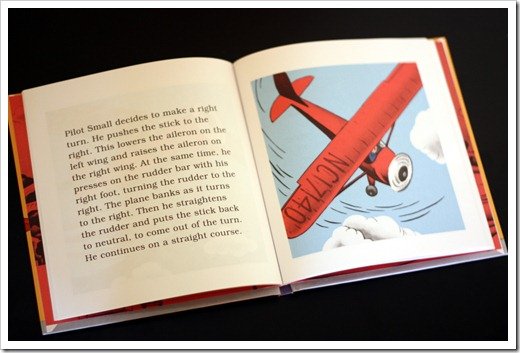 My husband’s main thought about Pilot Small is that he must be “loaded” since he not only has a plane, but also has a sailboat he flies past, lots of land, and a sweet vintage car. I had to include two pictures for this one. Because really. 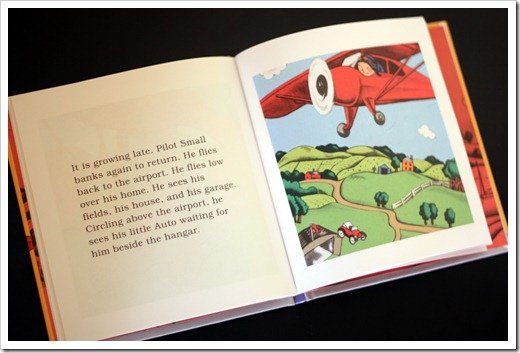 This book has bold illustrations and just a few words on each page, but it conveys a lot of information to toddlers who are getting ready to fly. There’s not much of a story… no real characters beyond “the people,” but it doesn’t need one. This book is engaging in its simplicity, and I’m sure I’ll be asked to read it dozens of times before we travel, and probably hundreds of times afterward. 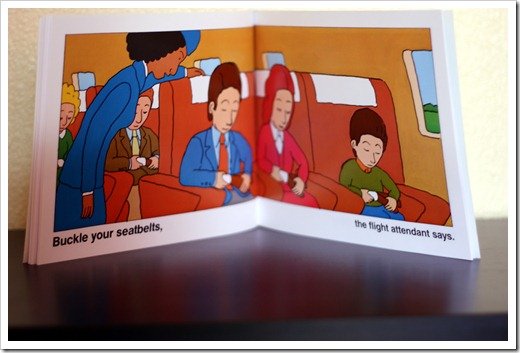 5. That’s not my plane… by Fiona Watt and illustrated by Rachel Wells

Like the other “That’s not my” books, this board book has “touchy feely” places on each page. There’s also a mouse on each page that Anneliese loves to find (and she says, “schveeschvee” for squeak squeak). Not much information here, and no real story, but Anneliese always gets excited on the last page when we can say, “THAT’s my plane! It’s windows are sooooooooo shiny!” 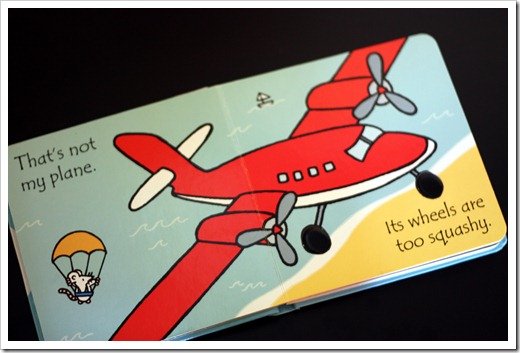 6. My Plane Book by Ellen Kirk

This board book gives a quick introduction to several types of planes, and a few specific/historical planes. It gives factual information alongside bold yet accurate illustrations. My husband loves to read this to the kids and elaborate on the information presented. But it doesn’t bother Anneliese one bit when I *only* read the text. I’m guessing that in a few months she’ll be able to answer the question on each page with the correct plane! 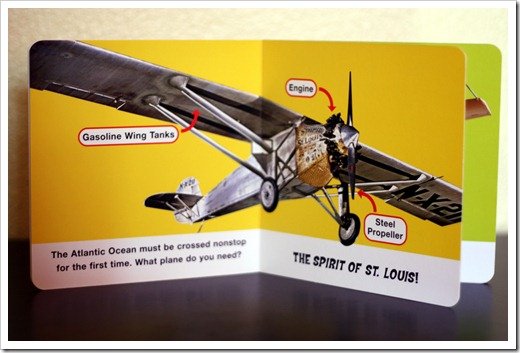 This book is full of beautiful illustrations, and focuses on the noises passengers encounter throughout a plane trip. From the “Ding!” that signals you that it’s okay to remove your seatbelt to the “whushhh” of the air conditioner and the accurate “Click, clack, thud, thump, shuffle, stomp, swish” of passengers rushing to get their carry-on bags and leave the plane, Downs gives an onamonapiac view of the whole thing. There is a rhyming story too, not just the noises, and in the back of the book, there are a lot more “What to expect” tidbits to prepare children for flight (ears popping, vortices of condensation coming off of the wing tips, and possibility of throwing up, among others). They go a bit beyond what a toddler can really understand, but it’s still an enjoyable read for little ones. 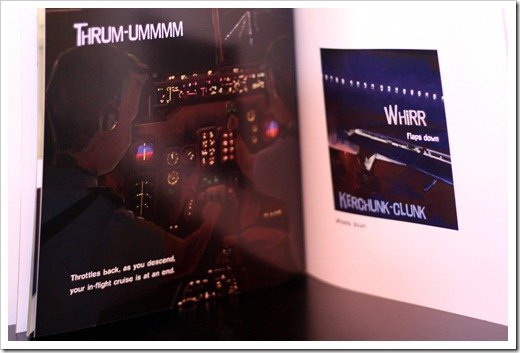 I can’t tell you how many times we’ve read this board book. Like Barton’s Airport book above, the illustrations are simple and bold, and there are just a few words on each page. This book introduces the reader to several types of planes — crop dusters, sky writers, and more — while following the path of a passenger jet from takeoff to landing. 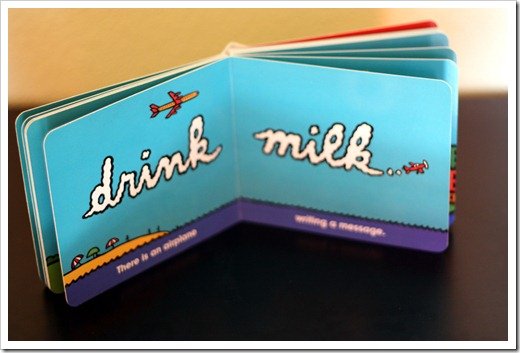 9. Richard Scarry’s A Day at the Airport

I had a couple of Richard Scarry books when I was a kid, and I don’t remember the stories at all, but I do remember sitting in the hallway poring over the detailed and whimsical illustrations with my sister. A worm wearing a hat and a boot, driving an apple-shaped car? Sure! This story follows Huckle, Sally, and Lowly Worm’s adventure with Mr. Von Flugel in his airplane-car. They visit the airport, use the bathroom and eat in a restaurant, explore the airport, and finally take a ride in a bratwurst balloon which deflates at their house. Obviously this one isn’t dedicated to presenting factual information, but there are a lot of good discussion-starters in the illustrations, and Scarry’s work is always going to be captivating for young kids. 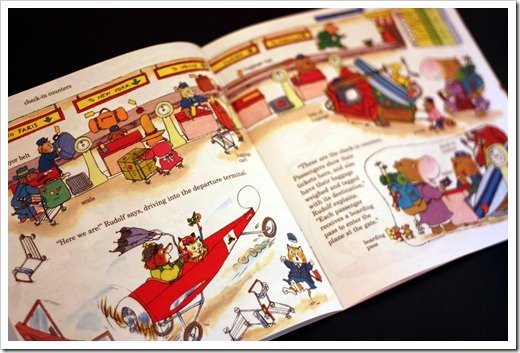 This book HAD to be oversized to capture the excitement of air shows, and even then, the author and illustrator couldn’t be contained by its pages. See the huge fold-out page below? So awesome. This book explores the huge world of aviation by following a family through an air show. As the book says, “Historical planes! Jet fighters! Experimental planes! Passenger jets! War birds! Biplanes! Ultralights! Flying boats!” This book is the next best thing to attending a real air show. 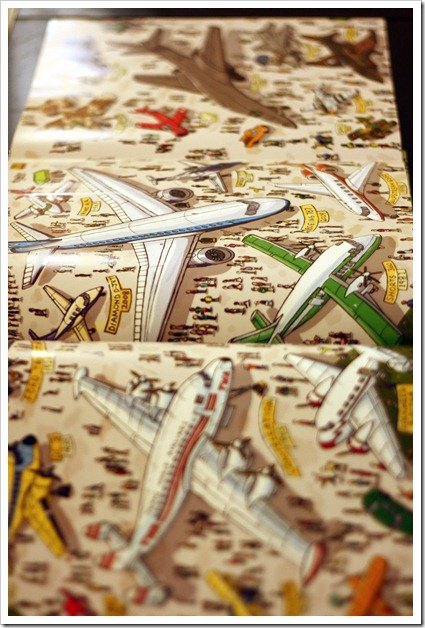 Be sure to subscribe to Joyful Abode via RSS or Email so you won’t miss future A.B.C. posts! 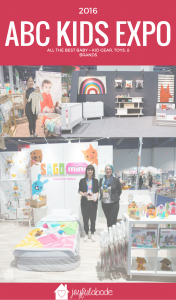 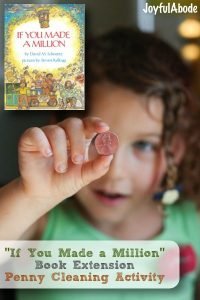 “If You Made a Million” Activity – Penny Cleaning Montessori Work