A Year’s Worth of Laundry Detergent for Less than $16

Seriously, you guys. When I watched the Duggars making their vats of laundry detergent (Was it on the show, or did I just dream about it?) I thought… “Okay, that’s a little bit beyond what I’m ever going to do to pinch a penny.”

But then I saw this post about making laundry soap. No melting things… no stirring giant pots full of strange ingredients, trying to figure out how to store 18 gallons of liquid, or pouring (spilling) into a smaller container for the laundry room. Just good old stir-and-serve.

And I don’t normally like to shop at Wal-Mart, but the whole everything-is-available-in-one-spot thing made the idea of going there palatable. So I did. I teamed up with a friend, and made a huge batch of the soap. We split the cost and split the soap, and can you believe it lasted both of us (WHILE cloth diapering) 6 months??? 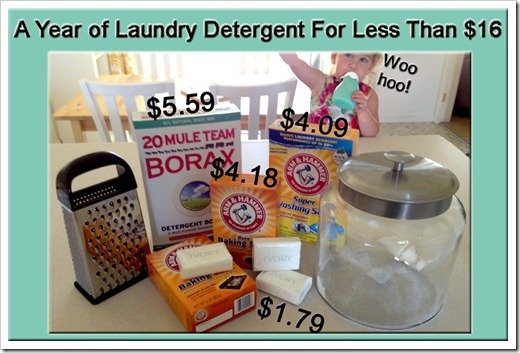 For the amount I would normally spend on ONE bottle…

of High Efficiency All Free & Clear (or even Up & Up, Target’s brand) liquid, I was able to wash tons of clothes and diapers for 6 whole months.

And then I ran out. The second time I mixed up a batch of soap, I did it slightly differently. The original recipe says to use Fels-Naptha laundry soap, or Zote soap, which I did. But the smell was a bit strong for me, and I had read that regular soap like Ivory (NOT a cleanser bar like Zest or something) will work just as well. So far that’s proven to be true.

Prices are from Alice.com, where purchases of over $49 get free shipping and they have TONS of home items. I may just order from them the next time (and also get some shampoo, toilet paper, and other sundries), instead of going to Wal-Mart.

I also added some Lavender essential oil, which you can also get at Alice.com for $6.99, but I already had mine.

All you have to do is…

So what are you waiting for?