Beat the Summer Heat with a DIY Cool Water Pad

This is a Sponsored post written by me on behalf of Dollar General for SocialSpark. All opinions are 100% mine. 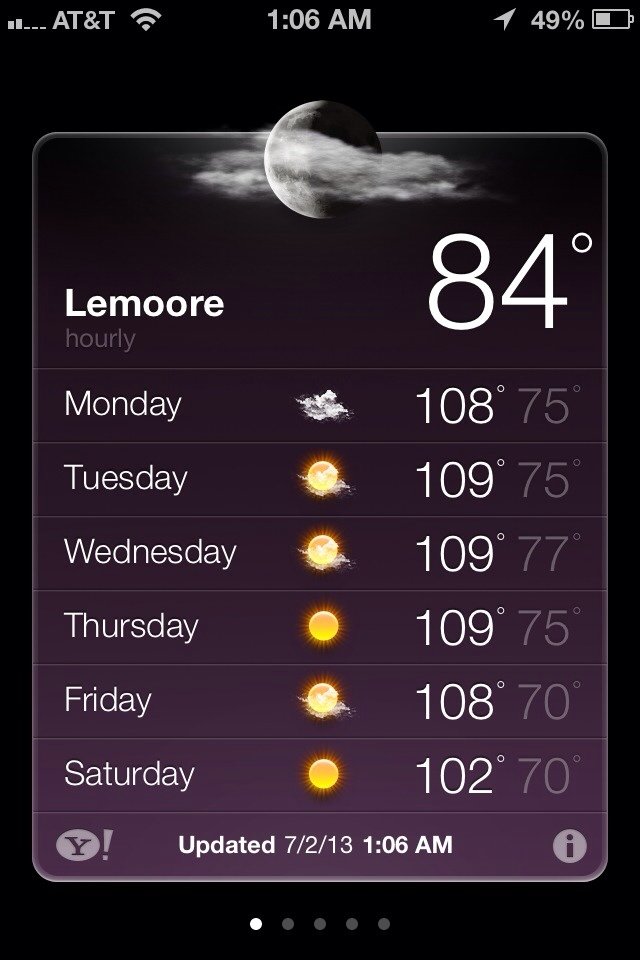 So if I want to play outside with the kids (and I do) AND wear them out for good naps, early morning is the time to do it. We made this Water Pad with materials from Dollar General, my awesome sponsor, one morning.
Actually, I made it the night before after bedtime, and filled it in the morning. At 10am it was 99 degrees already, but the water in the pad felt cool and was squishy and fun, even in clothes.
I thought it would be fun to make a game with the pad too, so I made 2 "goals" (the taped-off triangles) and added rings of 2 different colors. Older kids could race to see who could get all of their color rings in their goal first, or who could get the most rings in their goal, or work together to sort the rings.
My kids played with them, poking them and moving them around, but mostly just rolled around, smacked the water with their hands, and did somersaults. 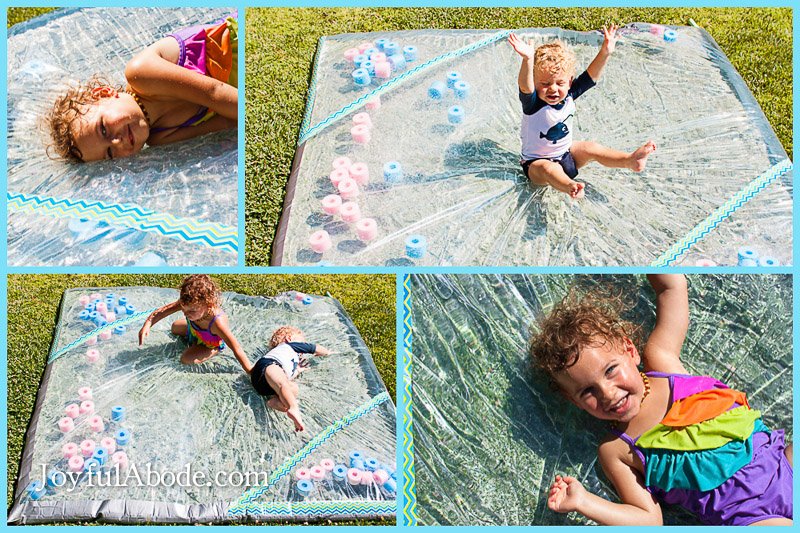 It was simple, though time consuming to make. I did it while my husband and I watched some Arrested Development, so it wasn't a big deal at all. All I needed was:

I cut off the parts of the shower curtains that had the grommets in them, then started taping the two curtains together at the edges. I did several overlapping strips of tape, but probably could have made sure to press every bit down more carefully (as after a while of playing, the pad was definitely leaking somewhere).

Once it was mostly taped up, I threw in the sliced pool noodles and taped the rest except for a small hole for the hose to fill it.

In the morning, I hauled the bag outside and spread it out, then started to fill it. 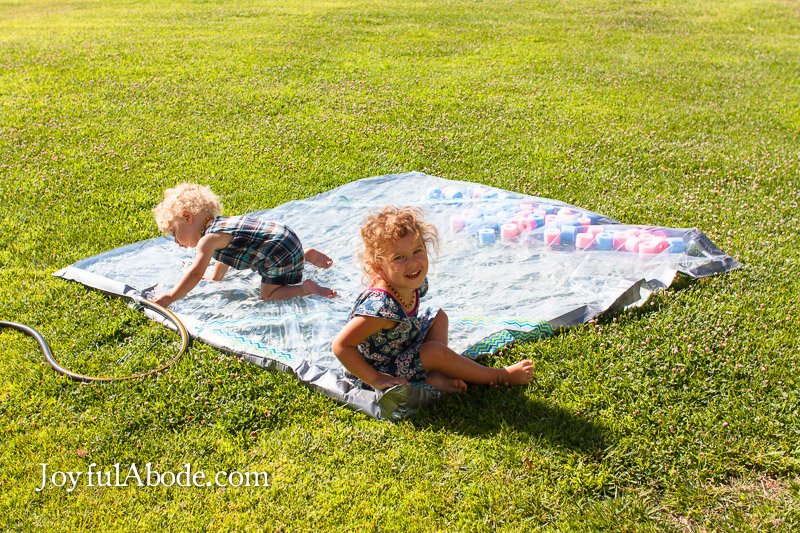 And once it was full, I taped up the hole where the hose had been. Frantically, lifting the edge trying not to let water spill out… in hindsight, that would've been much easier with two people, but I was by myself so that's not really helpful. I slapped on a ton of tape and eventually it held well enough. 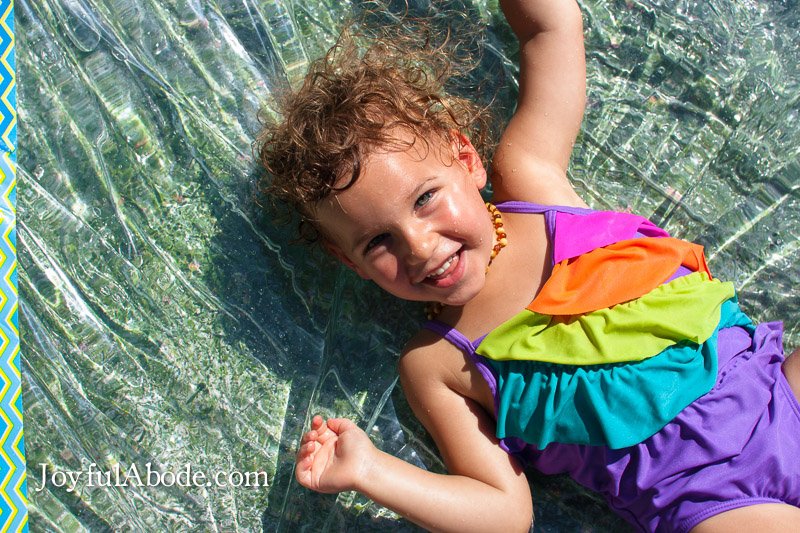 And the kids and I enjoyed lying on the cool "Water Bed" (Anneliese wanted to nap on it, asked me to turn off the light and get her a blanket) in the hot hot morning. 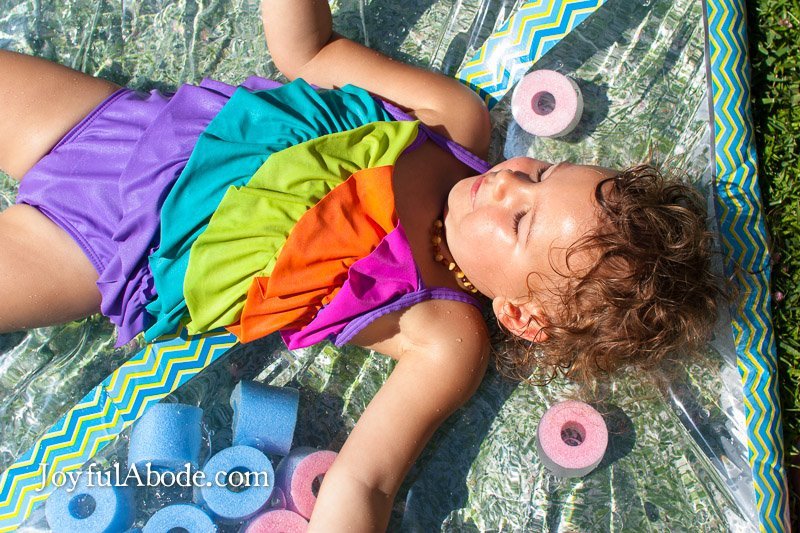 When you're done playing, you can cut a slit to drain the water, then refill it later if your tape kept everything sealed. Here's a tip though…
Don't leave it mostly-full of water while you go inside and feed the kids and put them down for a nap, if it's a 110 degree type of day. I now have a rectangle of burned-to-death grass in my yard. I think the bubble of water acted as a magnifying glass or something, and as the day wore on, it warmed up and became hot to the touch… Poor poor grass. I'm sorry, grass! Please recover! 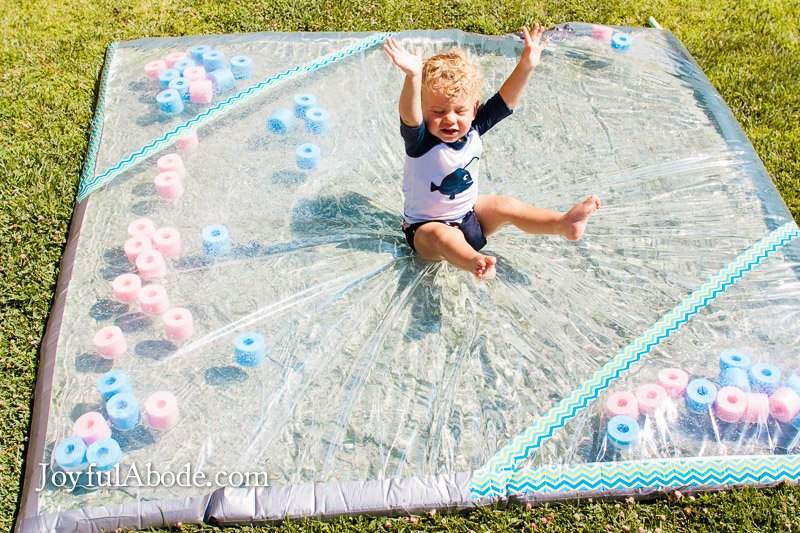 Still, burned grass and all, it was a really fun way to spend the morning, and I'd definitely do it again.

What's your favorite non-conventional way to cool off on a hot summer day? Do you have any other DIY outdoor activities I can wear my kids out with while it's SO HOT?