During World Breastfeeding Week this year, I’m answering a few questions, sharing my resources, and telling my story.

PLEASE note: I’m not a lactation consultant. I’m not a doctor. I’m just a mom. I’ve probably spent 5,000 hours breastfeeding in the last 2 years (well, maybe close), and I’m breastfeeding after breast reduction surgery, have breastfed through a pregnancy, and am now tandem nursing an infant and a toddler. I’ve only missed 2 La Leche League meetings since Anneliese was born, and I’ve read a few books and tons of websites about breastfeeding. I don’t know nothing, but I certainly don’t know everything. My advice and ideas aren’t medical advice, and you should seek the assistance of an international board certified lactation consultant (IBCLC) if you’re having trouble.

I’m due in 10 weeks and am feeling nervous about not being able to produce enough milk. Did you have concerns prior to delivering and what preparation did you do beforehand that you found useful?

I absolutely had concerns about this when I was pregnant with Anneliese. I had breast reduction surgery about 13 months before she was born, so I spent a significant amount of time during my pregnancy playing out different scenarios and wondering about what EXACTLY happened in surgery and how it would affect lactation for me.

Tanya, I know you weren’t asking from a post-surgical standpoint, but this is my experience, and I hope you find some of it helpful in your situation. 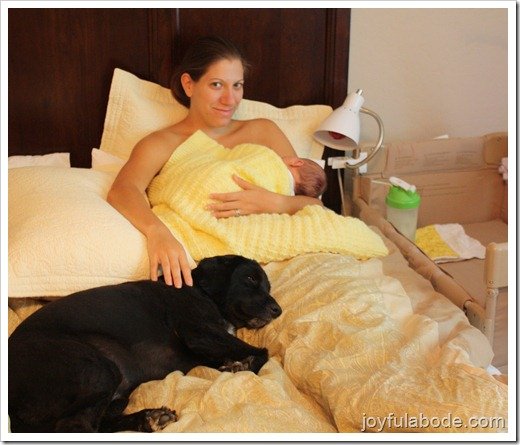 Before my breast reduction. I knew breastfeeding was the best thing for babies, and wanted to do it, but AFTER surgery? I switched to the Primal diet, convinced that “real food” and nutrient-dense diet was what I needed in order to heal from such huge body trauma (it IS a major surgery, no matter how routine). As a result of my diet change, I felt SO MUCH BETTER in so many aspects of my life, that my self-education spread to other related areas — including infant nutrition. I soon became convinced that formula is FAR inferior to breast milk, not “just fine,” and became even more committed to “trying to make it work.”

When I became pregnant just a few months later, I felt so conflicted. I was 100% excited and happy about having a baby joining our family, but I wondered if I had been hasty or selfish by having a breast reduction before I was “done having kids and nursing them” (as I thought I would wait before). I had to remind myself so many times about the pain and discomfort I endured every single day pre-reduction, and tell myself that I would be a much better mother post-reduction even if it meant I had to supplement what little milk I might be able to produce. 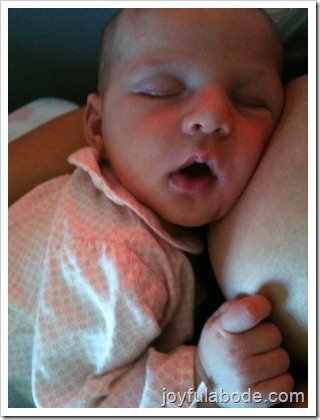 I learned that natural (zero-drugs) birth gave babies the best chance at a successful start to nursing. Antibiotic eye drops routinely given to newborns in many hospitals can cause blurring vision temporarily, and prevent eye contact between mama and baby right away. Baths given to the newborn can wash away the smell of amniotic fluid (you really can’t smell it, but baby can) especially on her fists, which has a factor in baby finding the breast to nurse. Swaddling can harm initial breastfeeding too, and of course any pacifiers or formula given to the newborn will reduce sucking stimulation on mama’s breasts, which means your body will think you don’t need to make as much milk as you actually do. (It’s a little more complicated than that, but that’s the general idea.)

So I took a Bradley childbirth class with my husband, and I hired a doula. I wrote a detailed (but short so it would be read) “Birthing Preferences” document for the hospital. I was going to have a natural birth. There was zero question in my mind.

Anneliese had no interventions after birth. No injections or drops, no baths or pacifiers. Everyone commented about how alert and calm she was, right from the start. 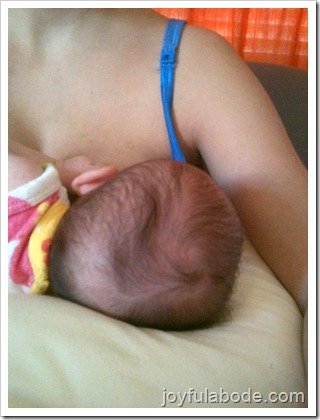 I had read The Breastfeeding Mother’s Guide to Making More Milk (a book I recommend to ANY mom who is concerned about supply for ANY reason… it helps you introduce whether there is a problem or not, pinpoint the problem if so, and gives lots of ideas for increasing supply or otherwise solving the issue) and Defining Your Own Success: Breastfeeding After Breast Reduction Surgery. I knew what to look for to make sure my baby was getting enough milk. I borrowed an infant scale so that I could weigh her in the first few days and make sure she was gaining weight. I dutifully kept track of wet and dirty diapers for months, so that I would know if she was ever dehydrated or not getting enough to eat. 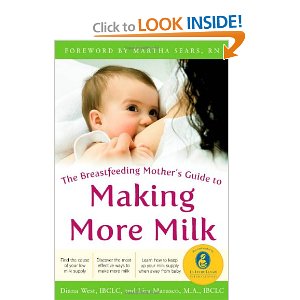 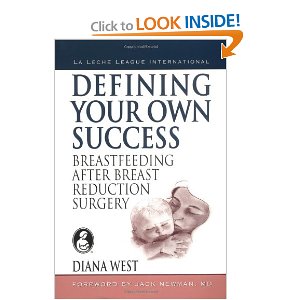 I watched and re-watched every video on Dr. Jack Newman’s website, so that I could recognize good latch, good drinking, learn how to do proper breast compressions, and prepare for using a lactation aid / supplemental nursing system if I needed to. Speaking of which, I bought a supplemental nursing system just in case I needed to supplement, so that Anneliese wouldn’t have to spend any time “on a bottle” if that time could be stimulating my breasts to make more milk for her.

I studied so many articles at KellyMom, eavesdropped on twitter #bfcafe chats, and scoured BFAR.org in search of “100% Success” success stories (since the stories in the book were riddled with struggle… I wanted to know it COULD be easy and wonderful from the start). 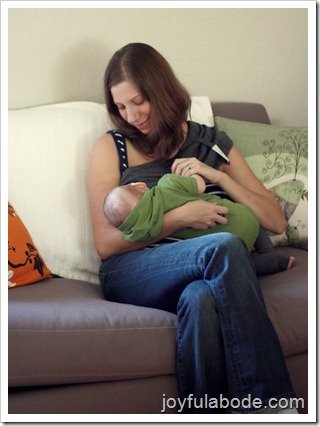 I had a list of IBCLCs on hand, information about my local La Leche League meetings, and began looking into mother-to-mother breastmilk sharing programs, so that if I did need to supplement, I could use human milk.

And in case I couldn’t find enough human milk, I prepared myself by bookmarking homemade infant milk substitute recipes (homemade “real food” versus packaged processed food), and sourced out all of the ingredients so that I could buy them quickly if I needed to. (Though I did NOT order them in advance, because I wanted to set myself up for success. I also did not have a canister of formula as “backup”… ironincally, until the hospital sent me home with one. But I never touched it.)

I bought a hospital-grade breast pump, in case I needed to use it between nursing sessions to stimulate more milk production. (I didn’t end up using it much at all, because Anneliese basically nursed all day in the beginning, and when she took a break, I used that time to get food or take a shower or go to the bathroom.) 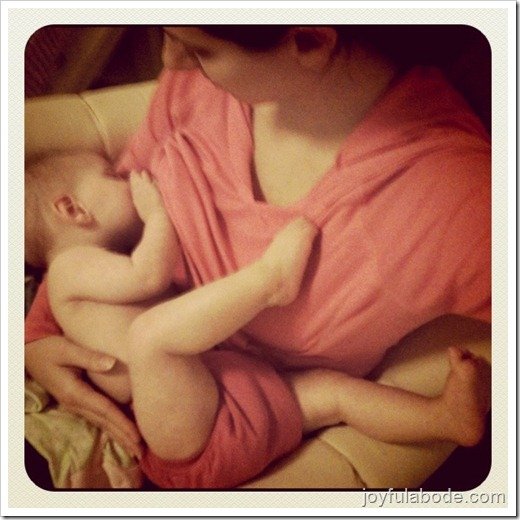 I nursed on demand, spent tons of skin-to-skin time with Anneliese, co-slept to make night nursing easier, and had several “babymoon” days in the beginning where we just stayed in bed all day together cuddling and nursing (of course, making sure I stayed hydrated and ate enough too).

I bought galactagogues before Anneliese was born, and started taking them as soon as I got home from the hospital. After a month or two, I weaned myself from them and found I still had enough milk for her, but I can’t know if they were necessary for me in the beginning or not. I wanted to safeguard everything I could though.

I’m sure there was more. 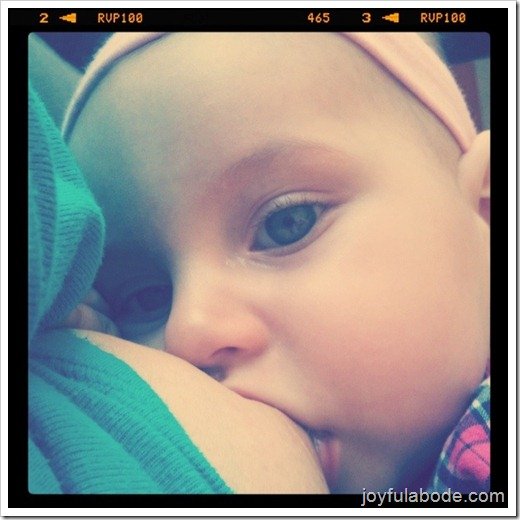 Do YOU need to do all of this?

I went “overboard” because of my breast reduction surgery. But maybe my hyper-preparation is what made me so successful (not that there weren’t rough patches, but that’s NORMAL… and the other mamas at La Leche League meetings were so helpful and supportive during those times).

At bare minimum, I’d recommend preparing for breastfeeding by: