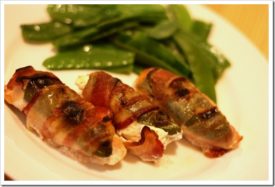 You know those bacon-wrapped jalapeno poppers that are filled with cream cheese? I could eat about 100 of them at a time. I LOVE them. But I rarely make them because carefully scooping all of the seeds out of the jalapenos is a bit time consuming, and I’m always afraid I’ll get pepper juice in 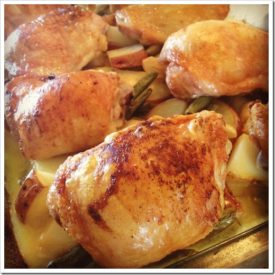 I was so excited to try this recipe from Real Simple. I’m a sucker for lemony things, skin-on chicken, and any excuse to eat roasted garlic. The first time was a bust though. I’ve cooked lemon slices like this before (the original recipe has you put them in the bottom of the baking dish), and 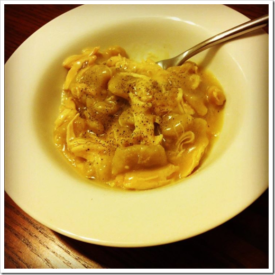 I came across this recipe on pinterest, which is adapted from this recipe at The Kitchn. It’s for southern-style chicken and dumplings. You know, the kind you get at Cracker Barrel. Like Emily’s husband (hey, that’s my name!), that’s what I ordered at Cracker Barrel EVERY SINGLE TIME we would go. Because it’s amazing and 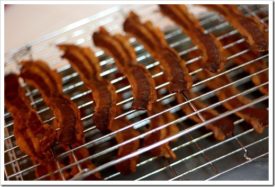 For my spinach salad recipe (which we took to Paige and Greg’s house for Thanksgiving), I needed to cook a pound of bacon. I didn’t feel like doing batch after batch in a pan, so I cooked it in the oven. So easy! You know that pre-cooked bacon you can buy in the store? You 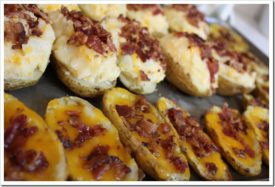 I think this is the last “make and freeze” recipe I had saved up from when I was pregnant. We got a huge bag of potatoes and I did various things with them, so they’d be available for quick meals, sides, or snacks when I was going to be occupied with a newborn and too 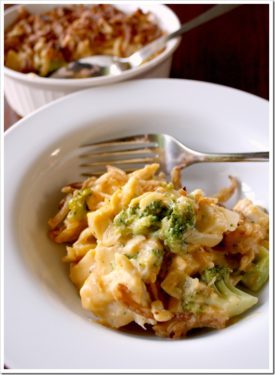 This is something I made while I was pregnant to freeze for post-partum. I’m so glad I did! I made one big batch, and put some of it in a casserole dish to eat that night, and froze the rest in those little foil bread tins… a couple sized for enough for me and my 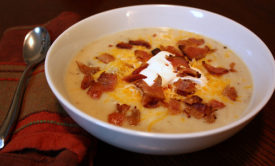 We got leeks last Tuesday in our CSA basket, and I wasn’t exactly sure what to do with them. I know they’re basically like big huge fat green onions, but didn’t really have a plan for them. So I googled around and found things like potato leek soup, cauliflower leek soup, things like that. So

Yesterday I hit 20 weeks in this pregnancy. A lot of people will say, “Wow, 20 weeks! You’re halfway through! But that’s only part true… while a pregnancy may last 40 weeks on average, for some reason (as I mentioned before) it’s measured from the first day of the last menstrual period, so for the

Crustless quiche is such an easy thing to make. Decide on your fillings, make a custard, throw it in a pie pan, and bake. It’s the low-carb version of the pasta/rice casserole, and somehow it seems eons fancier, too. If you say “quiche for dinner,” it makes people around you raise their eyebrows, impressed, and 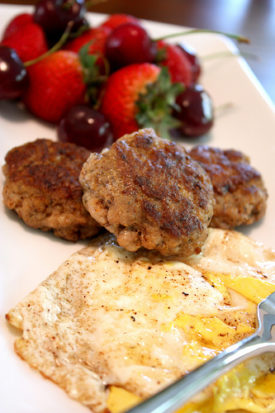 So, I have to tell you that since posting this recipe for breakfast sausage, I’ve pretty much had breakfast sausage in the fridge almost every day, ready to go. I typically make a batch a week, though sometimes I skip a week… But it’s not always the same recipe. I’ve come up with a spicy 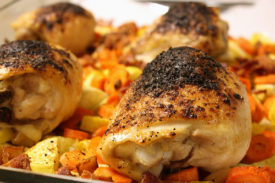 I have to preface this with a note: I have made this THREE TIMES already since its discovery. That is how good it is. I made it 3 times before I could post the recipe. The first time (its discovery) was when I came home from Massachusetts and the husband had dutifully worked his way 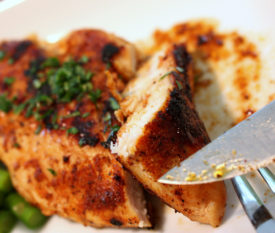 Here’s a chicken rub that will make any piece of bland blah meat into the star of your dinner (well, unless you pair it with asparagus with caramelized balsamic onions, but we’ll get to that another day). Every bite will be deliciously tasty, with a little kick. This makes enough rub for 4 chicken breasts.