I love soup. Especially blended soups. They’re so creamy and warm and comforting. Creamy soups are just perfect for a cool autumn evening, and they’re filling without being too heavy.

My husband doesn’t love soups as much as I do, but he’ll eat them if I make them. What he does love, however, is Loaded Baked Potato soup. So I wanted to make something sort of like that (BACON!) but lighter. I used roasted cauliflower for the bulk of the soup, with just a few potatoes to thicken it without adding the weird glossiness arrowroot can lend if you use too much of it, and of course without corn starch.

I’m still not sure if my husband knows this is a cauliflower soup. I told him I was making loaded potato soup, and he took the kids to a playground while I made it. So he never actually saw the cauliflower. He didn’t come back and say, “Hey, this potato soup tastes…different. Did you do something weird to it?” Nope. Just, “This is good!” Shh… don’t tell him. Just kidding. 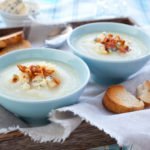 If you don’t mind dairy, you can stir in some grated cheddar cheese, full-fat sour cream, or a drizzle of heavy cream, or top with blue cheese. If you are dairy free, you can add a drizzle of coconut milk, or just some extra Frank’s Red Hot!

I hope you enjoy this creamy cauliflower soup recipe!

So… you don’t have an immersion blender? No problem! You can still make this soup. Use a regular blender (just make sure to leave the top vented for escaping steam, with a towel over it for splatters, and blend in batches).