You may or may not have noticed, but I briefly mentioned a while ago that I was interested in trying elimination communication with Anneliese. Basically, it’s the idea that if you notice signs that your baby needs to pee or poo, you can help your baby be more comfortable by letting her do it in a potty instead of her diaper. I wouldn’t want to pee in my pants and sit in it till someone decided to change me (no matter how frequently they changed me! — especially if I didn’t have the communication skills to say, “Dude, I’m wet.”), so why would my baby?

It works the other way too, where you can communicate to your baby that now would be a good time to pee (before going to run errands, for example, or before a nap) and if she can, she can eliminate and be more comfortable for a while. Exactly the same as telling your toddler (or teenager) “Why don’t you try to use the toilet before we start our road trip?” or yourself peeing before a class or long conference.

So to me, the idea just makes sense. Why not? No pressure, no insane celebrations if there’s pee in the potty (well, no celebrations obvious to the child), no punishment or demeaning if the child goes in the diaper (duh, it’s a baby). Just, “Hey, you wanna pee now? Yeah? cool.” or “No? That’s fine too.”

Also, the fact is, when babies start eating solid foods (or anything other than breastmilk) their poos get gross. We all know this. And there are flushable diaper liners (that go on top of the cloth inserts), and diaper sprayers to help you put the poo in the toilet where it belongs, but wouldn’t it be nice if I knew when Anneliese needed to poo, and she knew how to poo in a potty, and she didn’t have to have poo on her bottom inside a diaper, and I didn’t have to deal with poo laundry? Wouldn’t that be amazing? Yes, that.

So how do you do it? How do you start?

I don’t know exactly how other people do it. I mean, every family is different. Every baby is different. What works for one family doesn’t necessarily work for me and won’t necessarily work for you. Some people see the “signs” from Day 1, and are able to “catch” a lot of pees and even poos early on. I didn’t. My baby was nursing ALL THE TIME, so would usually pee while nursing and I wouldn’t notice any signs at all.

I just knew that I had to change her diaper about a million times every day. I tracked the times I changed her diapers, nursed, and when she took naps, and noticed no. pattern. at. all.

Some people have diaper-free time, so they can get to know their baby’s signals. Maybe wiggly legs or a certain face or sound beforehand. Like I said, my baby was nursing constantly. And I didn’t want to be peed on, so we didn’t do that.

Some people hold their baby’s naked bottom over/in a bowl or small potty WHILE nursing, to catch the pees. After a couple attempts at that, I decided it was too uncomfortable, a ridiculous position for us, and that I would probably spill any resulting pee in my lap, thus defeating the purpose of the receptacle.

How’s Anneliese been doing with it?

We really haven’t tried a lot. The early stages (first 2-3 months) because of near-constant nursing, it wasn’t something I was really interested in. Some EC folks on twitter tried to tell me I needed to start ASAP, or I’d miss “the window” and train my baby to be comfortable with sitting in pee and poo. I thought that was silly and didn’t worry about it. The few times I tried to hold her over her potty or the toilet (her back against my chest, my hands supporting her thighs), she was uncomfortable. It made her too stressed to even think about relaxing enough to pee, so she didn’t.

Once she could hold her head up better, I thought she would be more comfortable with me holding her in a sitting position ON the potty, instead of above it. She was much more comfy but her body wasn’t used to being in a sitting position like that, so she would try to straighten her legs. Again, too distracted by the New! Thing! She was sitting on! to relax enough to pee. So she didn’t.

We also did some diaper-free time on a towel on the floor while she played with toys, once she was comfortable being away from me for a bit. Usually she didn’t pee, and would get tired of being in one spot for very long (since she wasn’t mobile at all), so when she got fussy I’d put a diaper on her and hold her again.

All this time, I’ve been talking to her about pee and poo. When I change her diaper, I’ll say things like, “Your diaper was wet because you peed in it. Here’s a clean and dry one. Isn’t that comfortable?” And if I noticed her peeing or pooing WHILE I changed her diaper, I made a “psss” sound, then when she was finished, I’d say “You were going pee. You pee in your diaper, but Mama and Daddy pee in a toilet.” Just factual, objective things to help her be aware of the process of eliminating. But obviously, she wasn’t thrilled about the potty.

So I put the potty away again for a while. We visited family, we moved to a new house, and Anneliese started sitting up on her own. For long periods of time, to play with toys and whatnot. So I decided to try again. 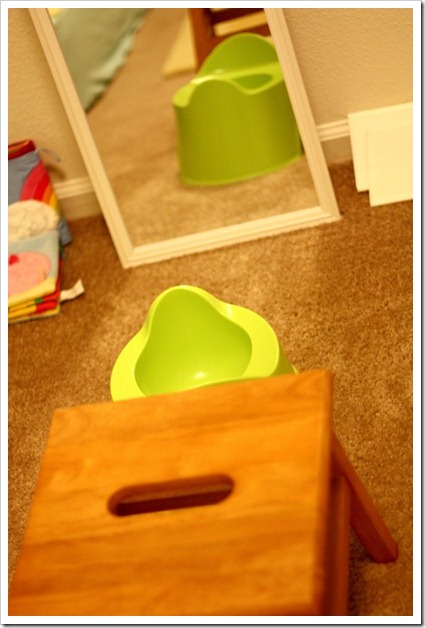 We had been playing in the living room, and I figured it was about time for a diaper change and a nap, because she was starting to get less focused with her toys. So we went to her room and I took off her diaper, which was wet.

But you know how sometimes it’s cold-wet, so you know the baby didn’t JUST pee? It was that. Not the warm wet that makes you go, “aw I just missed it” (if you’ve been interested in trying to “catch” a pee in the potty). Lately she’s been going down for a nap and then waking up a few minutes later, probably because she peed… so I thought, “Well, I’ll offer the potty and see if she wants to pee before her nap.”

She loves watching herself in the mirror, so I leaned her mirror in front of the potty, and placed a stool for me behind it. I sat her on it, supporting her weight with my hands under her arms, and told her, “You’re sitting on your potty. You can pee and poo in it. Why don’t we sing a song?” Then I sang “Jack and Jill went up the hill” to her, hoping it would relax her a bit.

She smiled and laughed at herself in the mirror, and seemed at ease on the potty, so I said the “psssss” sound in her ear (the same sound I made before if I saw her peeing). And what do you know, but she peed in the potty. A LOT.

Was she excited? No… but she looked relieved. As I texted to a friend, her facial expressions and body language seemed to say, “Where’s my diaper? Why am I naked? Oh… we are singing? Okay, yay! … oh… I feel better now.”

Then I put a diaper on her, swaddled her, and she napped for over an hour (which is great for naps lately).

When she woke up, her diaper was still dry, and I offered the potty again. We sang, I asked her if she wanted to pee and made the “psss” sound and she peed again! Just a little, but there it was.

Later in the day, after playing for a while, I offered again and she did not pee in the potty. I told her, “No pee this time? Okay. Why don’t we put your diaper back on and go run some errands.” So we did. When we came back home (maybe an hour or hour and a half later) her diaper was wet.

When I changed it, I offered the potty again, and she peed in it again. Then went down for another nap. When she wakes up (it’s been an hour already), I’ll offer her the potty again. If she wants to pee, awesome. If not, that’s cool too.

Regardless, I’m excited to finally begin this journey with her, and hopeful that real “toilet training” later on will be more of a phasing-out-the-diapers than a bribe-filled “babies wear diapers but big girls pee in potties” frustration-filled guilt-fest. (I know it isn’t like that for a lot of people, but I’ve seen it enough times to hope that it goes more smoothly than that for us.)

And I’m glad I kept trying.

PS (I’ve also been signing “toilet” to her whenever I say “potty”… so hopefully before she can talk, she’ll be able to tell me with sign language, if she wants to use the potty, which will mean less frustration for her.)

PPS I want to buy/make a couple “splat mats” (waterproofed/laminated fabric) to go under the potty in case of mis-aimed pee. And another potty for the living room. 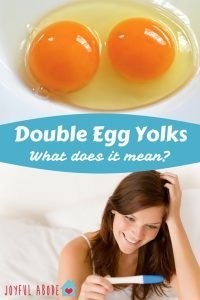 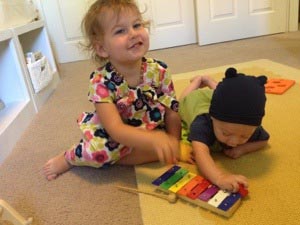 7 Ways to Prepare Your Toddler for a New Baby 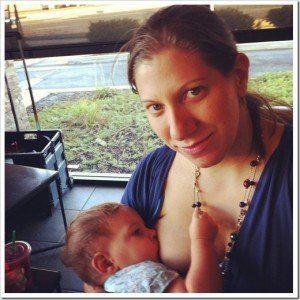