Chicken pot pie is one of those foods I’ve always loved. It’s warm and creamy, there’s just the right amount of chicken, lots of vegetables, and a perfect crust to include a bit of in every bite, like a biscuity condiment.

But I haven’t made it in ages, because my “go-to” recipe involved canned “Cream of” soups, and bisquick-mix biscuit lumps on top.

So when my friend Katie posted pictures of her chicken pot pie preparation and my stomach started to growl, I knew I had to do something! I NEEDED to find a recipe that would work. And not *just* work… but be delicious and nostalgic while also being wholesome and healthy. 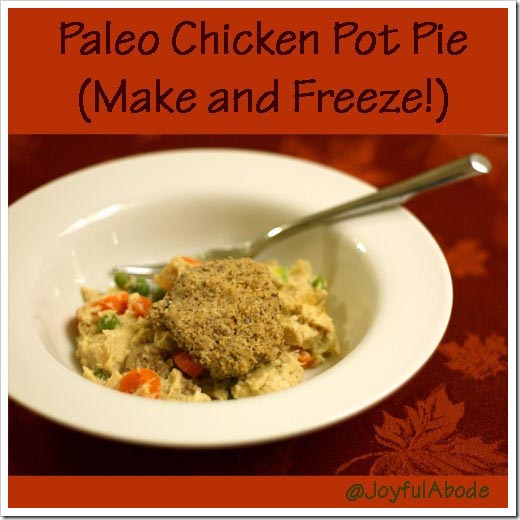 I had a bunch of bone-in, skin-on chicken breasts that needed to be used, so I threw them into the crock pot one morning, knowing that by the evening, they’d be cooked. 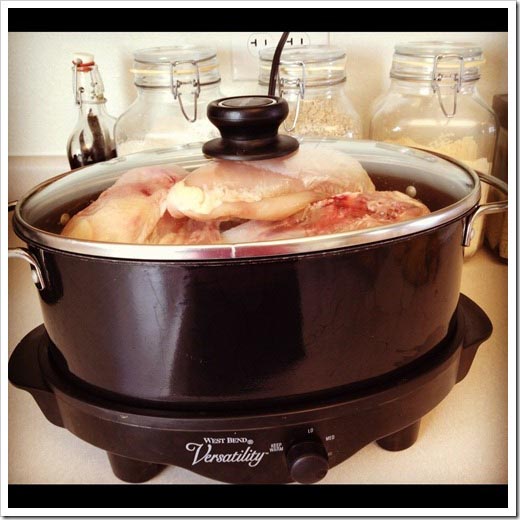 The meat was juicy and easy to pull off the bones, and after the kids’ bedtime, I removed the chicken, then tossed the bones and skin back into the crock pot with a splash of apple cider vinegar, to make stock overnight. And in the morning, all I had to do was strain out the bones and such… look at that gorgeous stock! 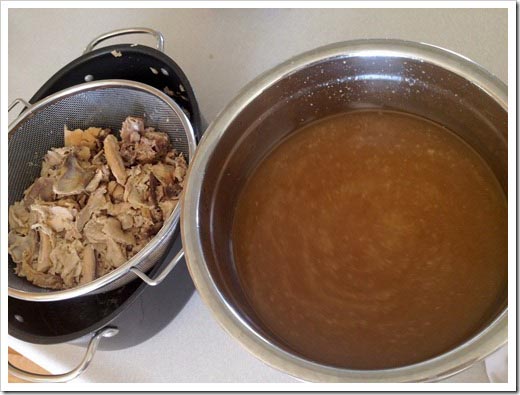 The vegetables were a mixture of things I had on hand and things I bought specifically for my pot pies, but you can really use whatever you want.

I heated about 1/4 cup of expeller-pressed coconut oil (the one that doesn’t have coconut flavor, so I use it for savory stuff), then threw in 2 diced onions. When they started to get translucent, I threw in 7 sliced carrots, 5 sliced celery stalks, and 10 cloves of garlic, minced. I really wanted pearl onions too, but the commissary didn’t have any and I didn’t want to wait until I went into town to look at other stores. So…next time.

While those were cooking, I diced 3 zucchinis. I threw them into the pan with 2 cups of peas (though I might use more next time because I LOVE peas in chicken pot pie) and a 10 ounce bag of mushrooms. Once everything was in the pan, I added a cup of chicken stock. 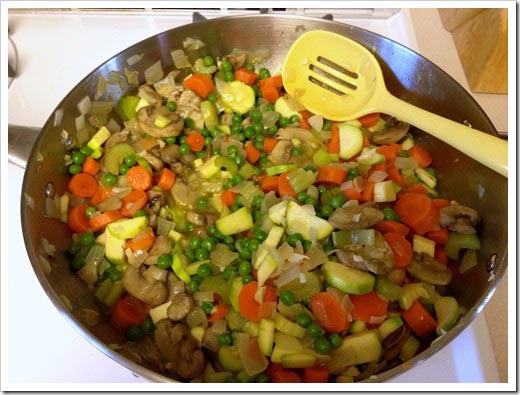 I let the vegetables cook for a while longer, so the stock could reduce a bit, and meanwhile, I cut up my chicken. It ended up being about 6 or 7 cups of chicken. Any chicken will work…breasts, thighs, the whole bird, whatever. 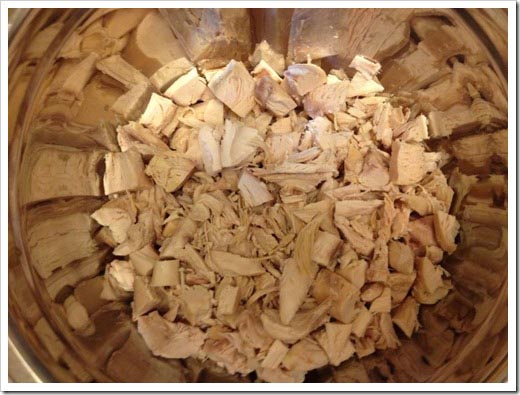 Then I dumped in the veggies and stirred it all together. 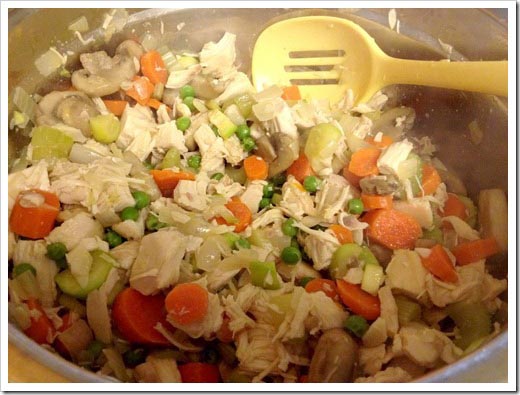 Once that was done, I started the gravy. In my search for awesome pot pie, I found this recipe by the Urban Poser, which featured a cashew gravy. It sounded amazing. Like… amazing. And while that recipe calls for raw soaked cashews, I didn’t have any and neither did the commissary.

So I searched around for similar recipes, and found that other recipes didn’t specify raw, but they would boil them for a few minutes before blending. This, my friends, is called winning.

I used the same pan I had used for the vegetables, to simplify the dishwashing, and the gravy came together very quickly. Just sautee an onion and some garlic in coconut oil, then add 5 cups of broth, 2 cups of cashews, and boil. 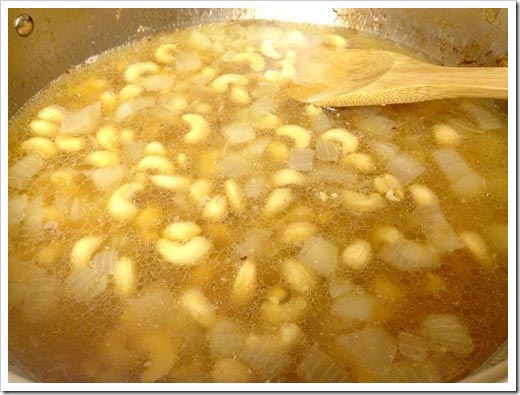 After it boils for a couple of minutes, blend it (I used my immersion blender right in the pan), and add pepper to taste. 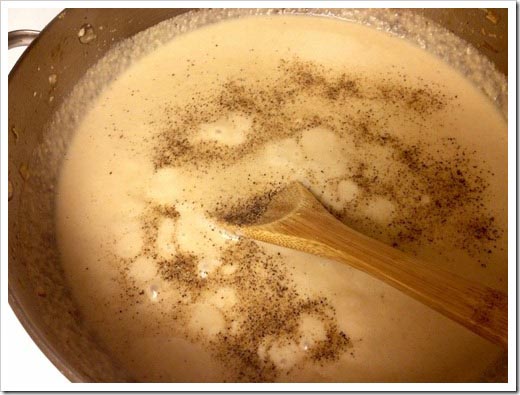 Mix the gravy into the chicken and veggies, and you have your pot pie filling! 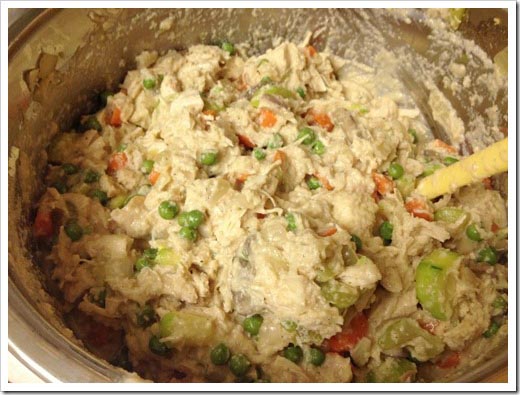 There are much “greener” ways to do this… but I’ve decided to use the foil disposable loaf pans for my freezer casseroles. They go from freezer to oven with no problems, and they’re just the right size for dinner for Anneliese and myself (then lunch for myself the next day), with the added bonus of not having to wash pans or casserole dishes afterward. 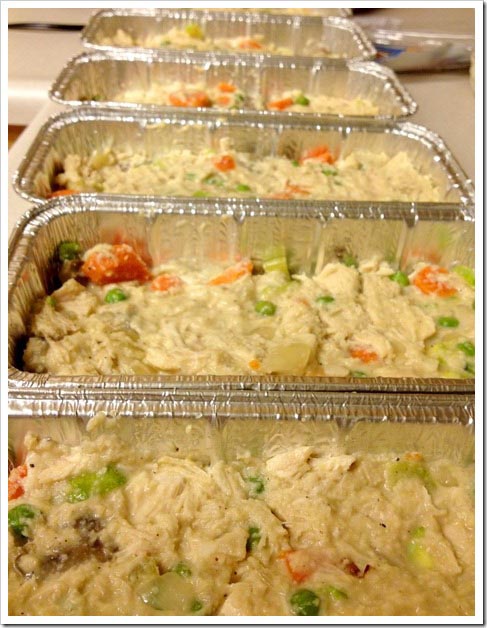 I was left with a slight dilemma about what to do for crust. Most of the paleo pot-pie recipes I had found while googling had some sort of almond flour-egg crust. Some used coconut flour, but I knew I didn’t want that flavor or texture here. I just worried that the almond flour crusts would be too dense.

When it comes to pot pie crusts, give me flaky or give me…biscuits.

And flaky is hard to come by in the grain-free world (gluten-free is easy. grain-free not so much). So I thought maybe I could lighten up the almond flour crusts with some arrowroot powder… but wondered if someone had done it before. So I googled for an arrowroot-almond-flour biscuit recipe. Real Sustenance delivered! I doubled the recipe (using butter of course, not earth balance), and used my cookie scoop to make lumps on top of the pot pies.

Just a little pat with my fingertips to flatten them, and they were ready to freeze or bake! 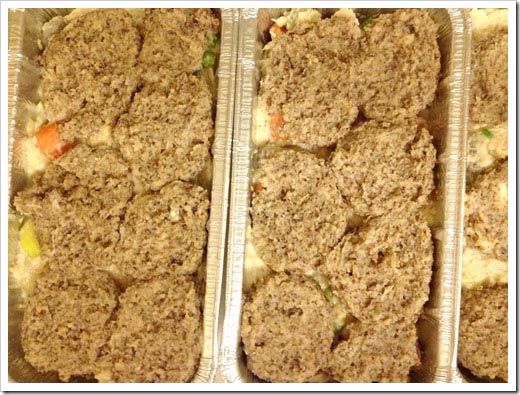 I put five into the freezer… just press some aluminum foil down onto the surface of the biscuit dough, so that there isn’t much air inside, then crimp the edge all around. Don’t forget to label the side with a permanent marker so you’ll know what it is in the freezer.

The other one? I baked at 350 degrees for about 30 minutes. The biscuits cooked perfectly, and the pot pie was a success. Anneliese loved it too, and she is not usually big on casserole-type foods. So this recipe is a win all around, and definitely one I’ll be repeating once my freezer stash is gone!

It was a lot of preparation at once, but I kept reminding myself that I would have many delicious warm creamy nostalgic comfort-food dinners “ready to go” afterward. Definitely worth it. 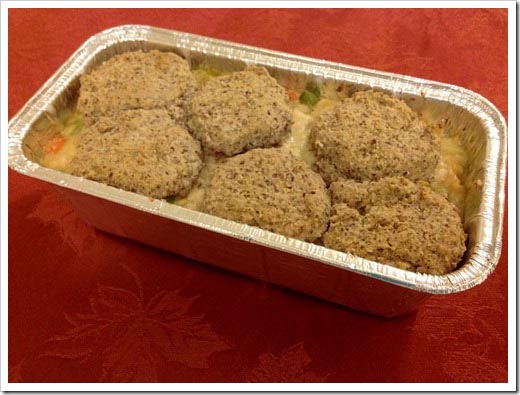 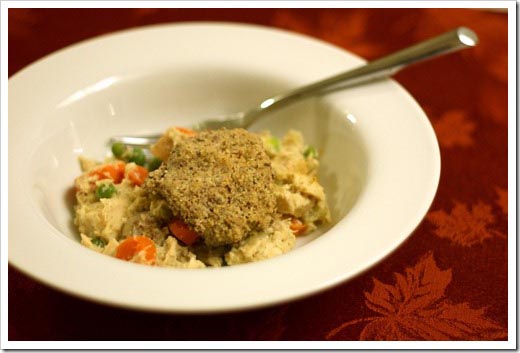 Please share this recipe with your social networks, if you like the way it sounds! The buttons are right below this.

Also, let me know if you try it out, please. And be sure to check out the other Freezer Friday recipes! 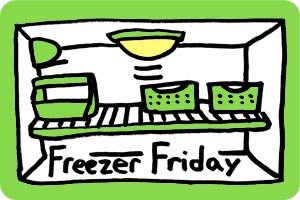