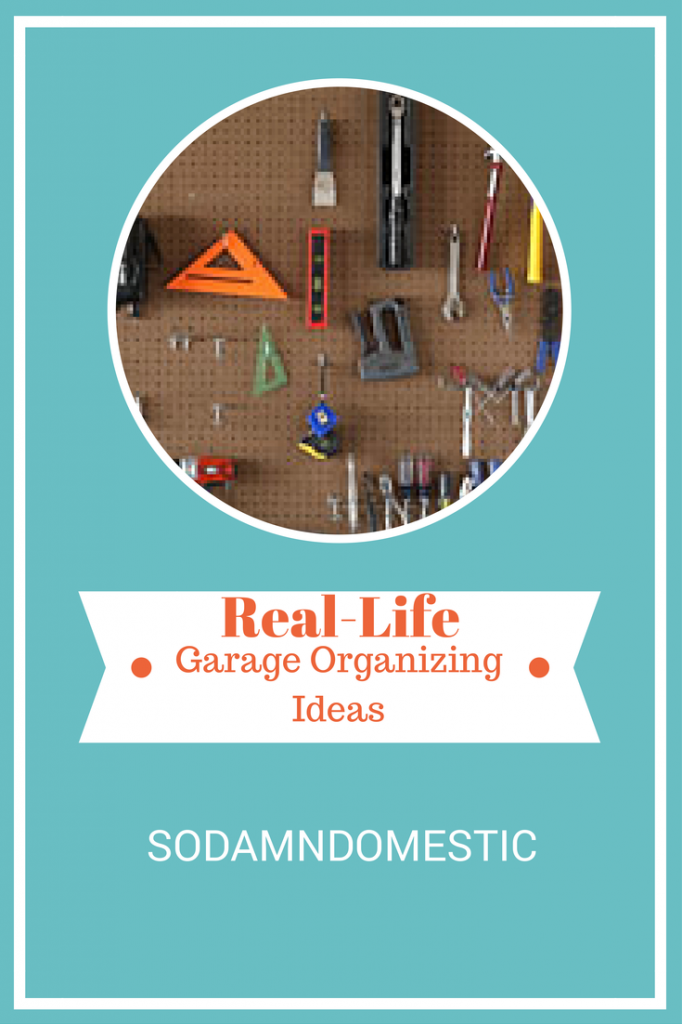 A garage can easily be a Last Holdout. Ours definitely was.

Those are the spaces that stay messy, unsorted, disorganized, basically unusable long after the rest of the house is under control.

Our garage used to be lined with boxes of things to sell at a future yard sale, totes full of stuff from my teaching days and remnants of my craft show days.

I can’t tell you how many rags my husband had for working on the cars. Probably two milk crates full. I think he also had three pairs of “mowing the yard” shoes, too.

There were so many redundant basic tools, yet somehow it was always hard for me to find a hammer when I needed one.

And if I ever wanted to sweep the garage, I had to move tons of stuff around just to reach the cobwebby corners… but I was pretty much afraid to do that, because who knew what would be lurking there. (Seriously, we lived in the Land of Black Widow Spiders.)

So mostly we just left it alone.

Sure, we were able to park in there, but it wasn’t pretty. And getting the stroller out to take the kids for walks was usually a challenge.

Our garage here in Maryland isn’t gorgeous. We don’t have matching brushed metal bins with hand-stamped labels and custom wall shelves. The one finished wall is unpainted, and the others aren’t so glamorous either.

We can find the things we need when we need them, and things don’t get in our way when we’re not using them. So I’m pretty pleased with it overall.

This – minus my daughter – is what I see when I pull my van into the garage. Lots of room, not many obstacles. And I like it that way. My number one tip for having a real-life uncluttered garage?

I don’t mean save up for a yard sale. I don’t mean keep things around in case you decide you want them again (with a couple of exceptions for families that move a lot – you’ll see a bit further down). I mean get rid of things as soon as you decide you don’t want them in your life anymore.

I used to have boxes upon boxes of  stuff to sell later, things to donate later, things I really should mail to a friend later, things we might need later. And so on. All of it was waiting for LATER.

But want to know what those things were NOW? Clutter. 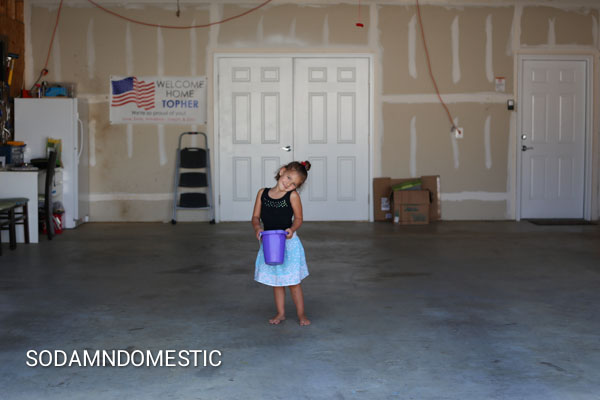 So this? This is our donation area. The door on the right goes to our laundry room, so I can just peek out and toss something into the box. We have one or two boxes going at any given time, so that I can add things throughout the week as I decide to get rid of them. And once they’re full, we drop them off at our local thrift shop.

No “saving up.” And no waiting for later. 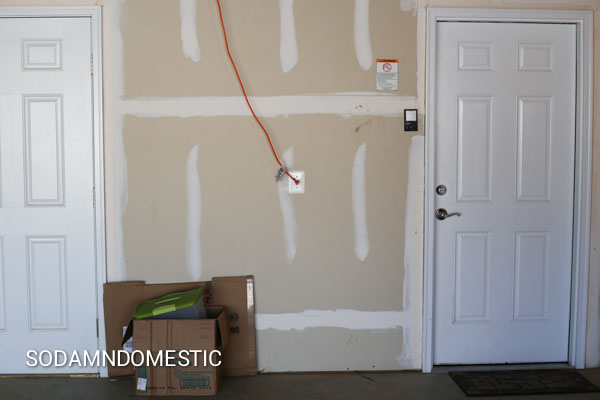 Tip 2: Segment the garage into zones.

You’ve seen our tiny donation zone. Here’s the outdoor care zone. Not much there… hedge trimmers, our rake, our snow shovel beside the rake on the other side of the corner, our little push mower, and rock salt. That’s about all we’ve got in this area. I guess it’s also the outdoor entertainment zone, because we have our canopy and folding tables here too.

There’s also the tool zone on the opposite wall. 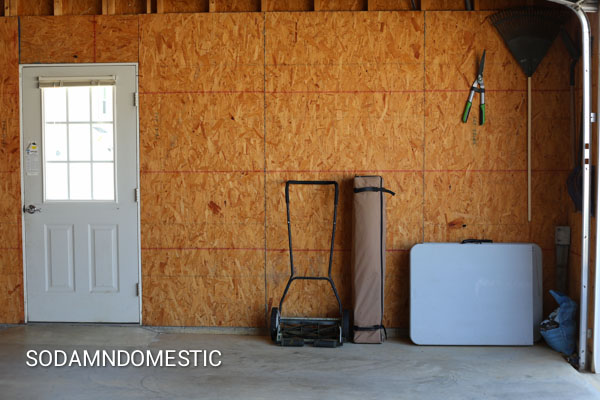 This isn’t the prettiest garage tool area I’ve ever seen, but it’s far more functional than the “tool stuff” was in our last house. I can find a hammer, the level, and any screwdriver I need, so I’m happy with it. And my husband seems to be able to find any weird little tool or piece of hardware he may need easily.

I like that the sharp things are high up, out of reach of little hands. 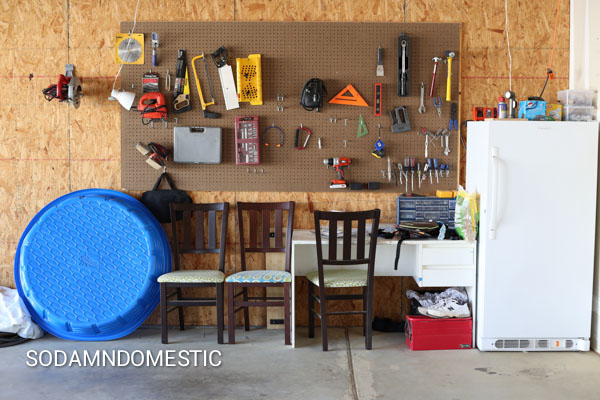 When we moved here, I told my husband I wanted everything hung on the garage walls, nothing touching the floor. Some things made their way onto the walls, certainly, but a lot of it never did. And it’s fine, because we don’t have a ton of junk in here. There’s no digging involved when I want to grab the kiddy pool for the children to splash in. 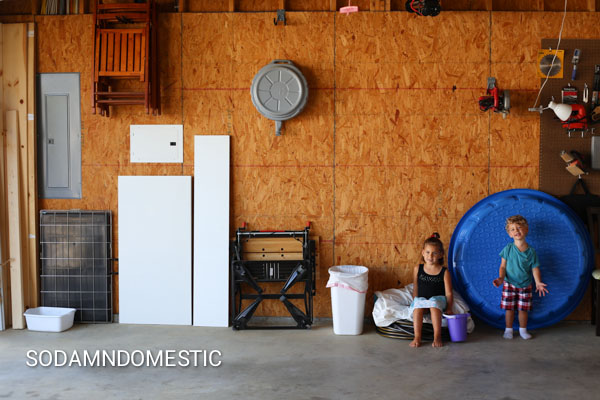 I already wrote about this garage closet here, explaining how I spent two hours sorting and decluttering in here and how I wasn’t even finished. Well, I’m still not finished. So don’t judge it too hard. But here it is.

Tip 5: Don’t be afraid to put stuff away.

For a while, I kept the stroller in front of these closed garage doors. That way, when I wanted to take the kids on a walk, I just popped them in and off we went. My husband’s weights were also in front of the door (where the little step ladder is).

But that meant we always had to move around those things. I often had to scoot his weights out of the way to access our freezer, or roll the stroller out of my path (when both cars are in the garage) To take out the recycling. What’s the point of that?

So those things live in the closet now. When I’m getting ready to go on a walk, I can handle opening the doors and backing the stroller out before popping the kids in. And I told my husband that if he wants to work out, he can move his weights to do that, and to count it as one more rep. He laughed, rolled his eyes, and admitted, “I guessssss.”

And in the meantime, those things don’t get in our way multiple times every single day. Which is super nice. 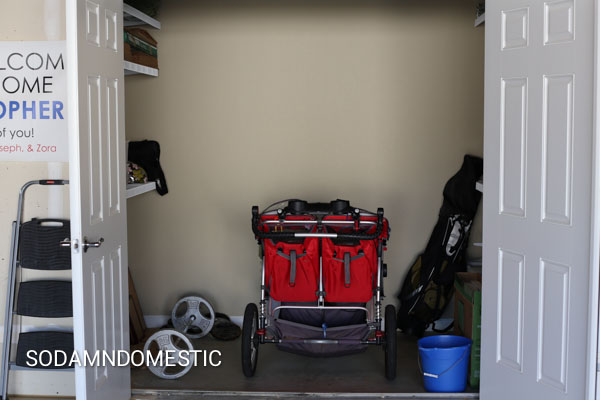 This might sound like a picky little thing, but I swear it makes a difference. The clear shoeboxes I like for storing small things are from The Container Store, and they come in two sizes (I think the larger size is “men’s” or something). In this closet, we use them for things like batteries, light bulbs, extension cords, extra Roomba parts, hearing protection, and so on.

We used to have mis-matched plastic containers from various stores and brands, and they were so annoying because they didn’t stack on each other properly. If more than one lid were removed during a project, they didn’t interchange with each other, so replacing them was obnoxious. And empty boxes wouldn’t nest into each other for easier storage.

So I got rid of ALL of the mis-matched boxes from the entire house and garage when we moved in to this house, and replaced them all with these Container Store ones. All of the empty ones are stored in one area together, and as our organization changes or we declutter from different areas, we can borrow containers from other areas of the house.

Also in this picture – one of my “Saving for Later” things I’m okay with – pictures and canvases, seen on the floor here (and that banker’s box has some smaller ones in it). I love hanging lovely things on our walls, but we never know what the layout of our next home will be, so I keep out-of-use things I might like to use when we move again. 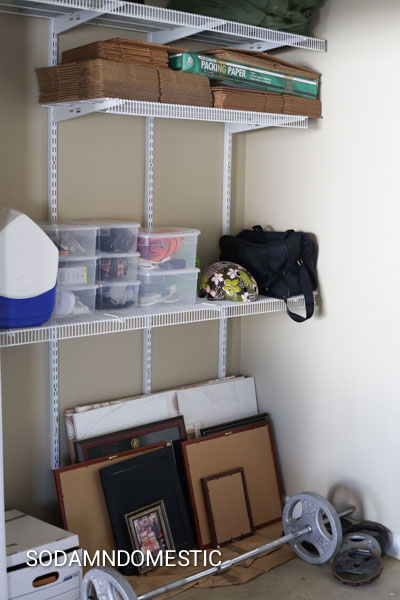 Tip 7: If it doesn’t bother you, don’t worry about it too much.

I tried to sort this area a bit, but aside from the bicycle pump for my stroller tires, the potting soil, and a couple of toys for the kids, I mainly have no idea what is here. It’s whatever my husband put in the closet, I guess.

Looking at the picture, I guess it’s paint stuff, his golf bag, our large cooler, more tools, bungee cords, microfiber cloths for the cars… and I’m not sure what else.

And just like the tool zone you saw with his work desk and the peg board, I don’t really worry about it. As long as I can find what I need, I don’t need to pressure my husband into organizing, labeling, or decluttering more items. He does a bit here and there, but want to know something? I still have my own stuff to deal with. There’s no point in making it a “thing.”

You know the saying that those who live in glass houses shouldn’t throw stones?

Well, those who have their own messes shouldn’t nag others about theirs. Work on your own stuff. 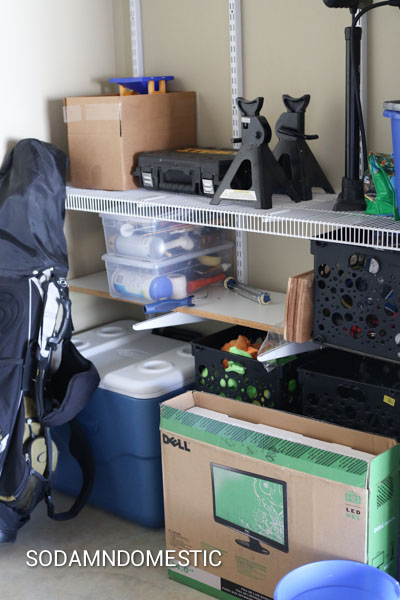 As long as they’re not too heavy and an injury risk, boxes of things you use less often can be stored up high or in more inconvenient spots. The top shelf in this closet holds our holiday decorations.

On the shelf below it, we have water in case of an emergency, and some curtains we aren’t using in this house (for the same reason I save the picture frames and cabinets… we never know what windows our next house will have). 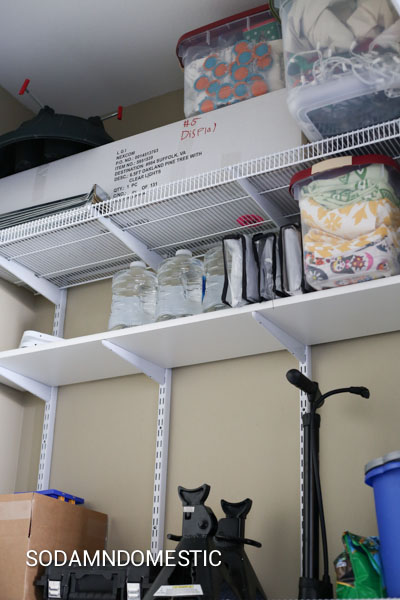 This is real life.

This is our real garage, somewhat in a state of non-organization, but it’s okay because:

What’s your garage like? What are your problem areas there? What tips and tricks do you have to share with me and with other SDD readers? And which of these tips will you start using this week?

My neighbour has sections of PVC pipe mounted to the wall to store his brooms, rakes, etc. upside down. – Elsa O.

Remember it doesn’t have to be fancy, it just has be functional.- Laura Wittmann, OrgJunkie.com

My only tip is DON’T KEEP ANYTHING IN THE GARAGE. Haha. I mean, we have our mower and stroller in there. And our car of course. – Diana Par-Due, Front Yard Foodie

I like hanging things when possible. Like using a rack for balls or bikes to conserve floor space. – Jennifer Borget, Baby Making Machine

At our old house, Patrick built us a storage shelf in the space above where the garage door sits when it’s open. That space is never used and is usually (by code) tall enough to fit the large blue plastic storage bins and coolers on. It was pretty nifty! We labeled the bins for easy access. – Casey G.

Ready to get started? 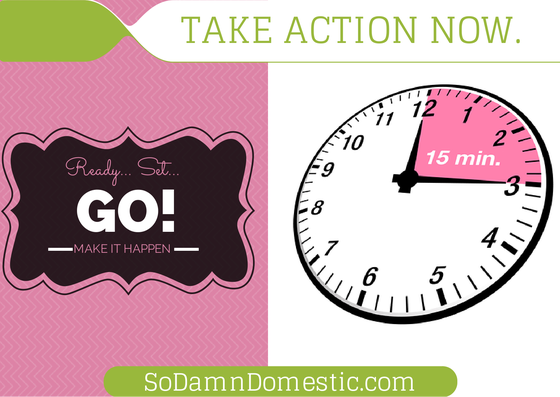 Your 15-minute first-step is to make a “first pass” of your garage. Just gather up all of the obvious stuff to get rid of.

If you have a pile of things to donate, load them in your car and take them the next time you go anywhere.

If there’s a stack of boxes to recycle, collapse them and put them in the recycling bin or the car.

If there are three bags of potting soil and you can’t remember the last time you saw anything green, carry the bags to your green-thumb neighbor.

Start with the simple things, and go from there. 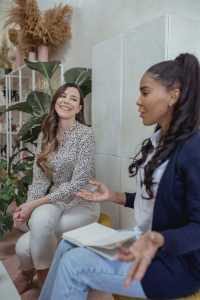 8 Reasons You NEED to Get Organized This Year 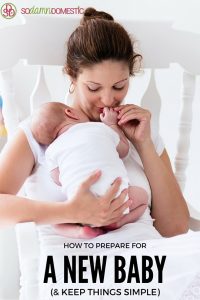 How I'm (SIMPLY) Preparing for My New Baby 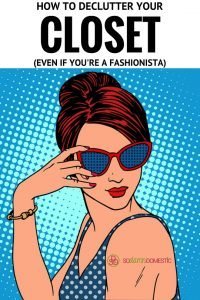 How to Declutter Your Closet (Even if You're a Fashionista)