Getting Settled at Randolph AFB, TX

We arrived at Randolph Air Force Base and found our way to our new temporary home in the Temporary Living Facilities. Living? Lodging? I am not sure what the L in TLF is. Either way…

We had thought my husband was going to be put in a single room, like a studio with a kitchenette with a microwave and mini fridge, because his orders are TAD, not accompanied. But I guess the lodging people decided to be nice because we were given a one bedroom apartment instead, with a full kitchen, living area, and an extra bathroom sink in the “hall” (not really a hall, but you know). 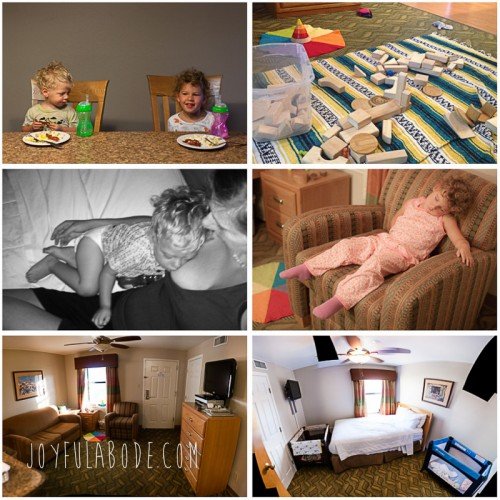 The Guy took our kids to the playground nearby while I set to work unpacking us and figuring out how to make the space work for us for an entire month. We moved the dresser into the living room, so that we could get changed without waking children in the evening or morning (or fold laundry and put it away during nap time), which also made room for 2 pack and plays in the bedroom.

Anneliese doesn’t mind sleeping in a pack and play as long as it’s a Special Thing. When we found the blue one that was here already, I gasped and exclaimed, “Whoa! Do you know what this says? It says, “Special Bed, For Big Girls Only.” She instantly claimed it and has several times explained to Joseph that, “This is my bed for big girls only. Yours has the animals on it. That’s for little guys.”

I made a play area in the living room, with open-ended toys I brought with us, and several books. The woven blanket we picked up at a New Mexico gas station for $15 is lovely as a rug, and more inviting to play on than the TLF carpet is. 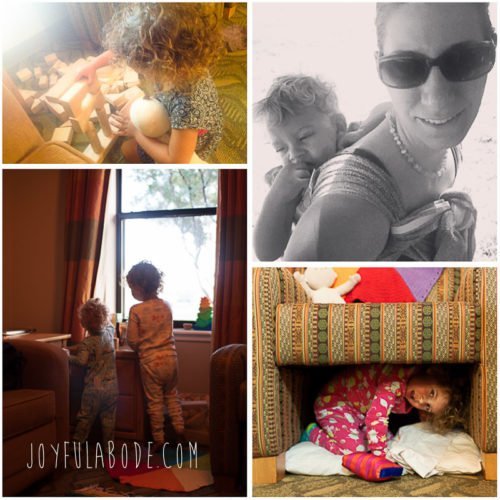 We’ve gone on walks, found the library and their story time (and got a library card so we can check out books each week), and watched Grease song-and-dance videos on YouTube about a million times (We Go Together is Anneliese’s favorite).

We’ve also had an update from my Mother-in-Law (top right below) about Zora. Zora and her cousin-dog Eowyn are starting to be more comfortable with each other, and Zora is settling into her long-term-temporary home. I’m glad to see happy pictures of her, and updates from my in-laws for sure! 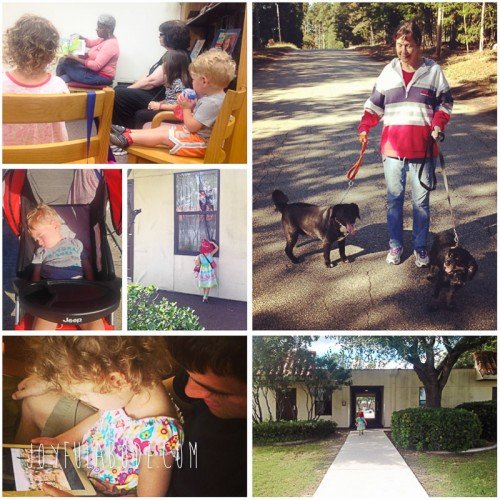