Today while skimming through blogs, I came across this recipe for Homemade Graham Crackers. And they just happened to also be grain-free! And they ALSO happened to use ingredients I had on hand already!

So I had to go for it. I love(d) graham crackers… sometimes you just want something cinnamony and honey-y that will sort of melt in your mouth as you eat it, without being too complicated. 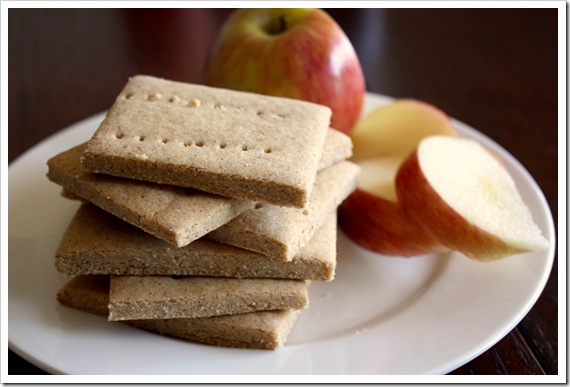 This fits the bill.

Liz made hers so that she could make s’mores, which sounds awesome! (She also made homemade marshmallows, fancy girl!) I just wanted something to snack on. No, I didn’t eat the whole stack in that photo… I just thought they looked pretty in a tower. Since these are made with coconut flour and almond flour, they’re pretty substantial and filling (and nourishing) so just a couple will make a nice snack.

I’m not sure if I made them as thin as Liz’s… her cracker looks much thinner than mine do when you compare pictures, but she said it would make 20 crackers and I got 24 out of it. But then again, her 20 crackers might be much bigger (surface area) than my 24. Hard to tell. Either way, they’re good. I wouldn’t say a “dead ringer for the boxed variety” though.

I also think that if/when I make them next time, I might also sprinkle some more cinnamon and sugar on top to get the “sparkly” extra something that the ones in the box have… I can’t even remember the last time I baked anything with sugar in them, so while I’m splurging, I may as well go all out, right? Maybe? Then again, they’re delicious like this.

Preheat your oven to 350 degrees Fahrenheit.

In a bowl, mix together:

In your stand mixer, cream together:

Then add the dry ingredients to the wet ones and combine until a dough forms.

Make dough into two balls and place each one on a parchment-lined cookie sheet. Put waxed paper on top, roll the dough out thinly, and remove the waxed paper. Cut into crackers with a pizza cutter and make little holes with a fork — Liz said that will make them bake more evenly, and I believe her.

Bake 10 minutes, then remove and cool. I just lifted the whole piece of parchment off and placed it on the counter top to cool, but if you want, you can put your crackers on cooling racks. 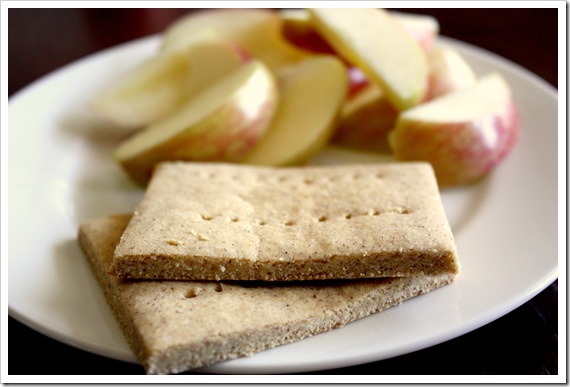