I came across this recipe on pinterest, which is adapted from this recipe at The Kitchn. It’s for southern-style chicken and dumplings. You know, the kind you get at Cracker Barrel. Like Emily’s husband (hey, that’s my name!), that’s what I ordered at Cracker Barrel EVERY SINGLE TIME we would go. Because it’s amazing and delicious and comforting and delicious and everything about it is just right. And it’s delicious.

So I thought I’d try to gluten-free-ize it. I can’t say primalize, because I used a gluten free flour mix which is mostly bean flour, sorghum, and tapioca, but  it’s a smaller compromise in my mind than using the cake flour the original recipe calls for.

This picture is ugly. I’m aware of that. It was like 8pm and it is DARK, and I took this with my phone because my real camera’s memory card was in my computer. But you’ll just have to trust me… it’s GOOD. At least the picture shows the glossy thick sauce the broth becomes… which is part of the Important Magic of Southern-style chicken and dumplings. 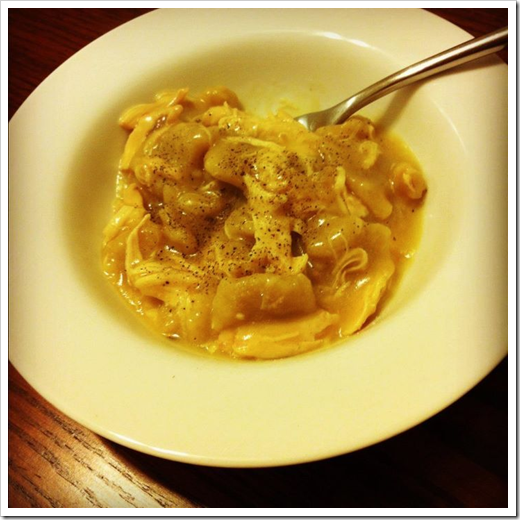 You will need cooked chicken and some chicken stock. You can kill both birds (heh) with one stone by boiling a chicken for an hour or so. I bought a rotisserie chicken though, removed the meat, and then simmered the bones with some carrots and half an onion to make stock. When it’s rich and yummy-looking, strain the broth and discard the veggies (they’re “empty” by now) and the bones.

While that was going on, I made the dumplings.

To make the dumplings:

Cut in 5 T cold butter until crumbly texture. I use my fingertips to do this.
Pour in 1 cup cold milk , stirring lightly with a spoon after every 1/4 cup or so.

When it starts to hold together, press into a ball and roll out (this is my favorite tool for this), then cut into strips, about 1”x3” for dumplings.

Drop dumplings into boiling chicken stock and let cook covered about 5 minutes. Make sure no dumplings are sticking together, because they won’t cook all the way and that isn’t the best thing ever. Then add cooked chicken, stir, and let cook about 20 minutes.
Serve with salt and pepper.