I’ve been wanting to make some sort of variation on this for a while. Some people sew pouches with clear “windows” for “spying” the objects. Other people use empty water/frapuccino/soda/whatever bottles. Sometimes people use spice jars or other small glass or acrylic jars. I think it would be really fun to make smaller ones with different themes, or to get a set of spice jars like this for each letter of the alphabet (it has 20 jars, so you could use them for the consonants and get 6 extra jars to sit on the top, for A, E, I, O, U, Y). 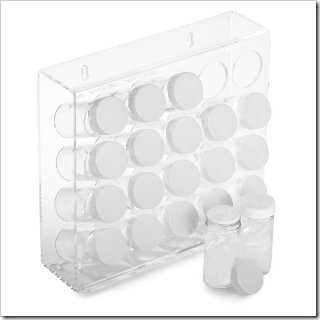 Anyway, for this one I wanted it to be sort of theme-free… something that could be pulled out and enjoyed whenever, any time of year, and have enough items in it to “spy” that it wouldn’t get boring quickly.

For the small items, I looked to the craft store, mostly in the scrapbooking section. There were some really cute little fabric plush stickers, which — as long as they are mostly symmetrical — you can stick back-to-back in order to make one non-sticky double-sided item for your I Spy game. So I got two sets each of several of those. 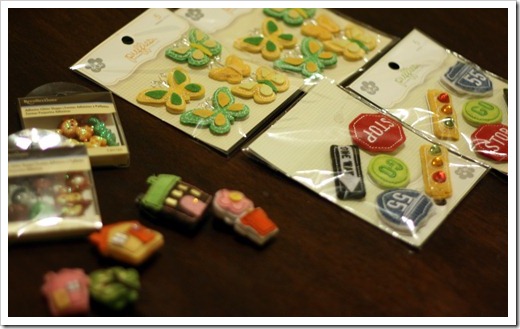 And just pressed the matching shapes together firmly, like this. 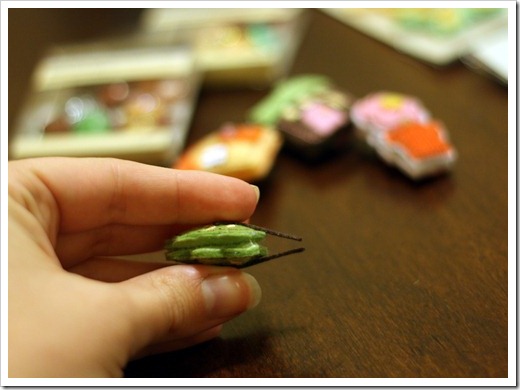 Some of them, like the houses, aren’t perfectly symmetrical, but that’s okay as long as most of the sticky pat is. The little chimney sticking up won’t bother anyone. 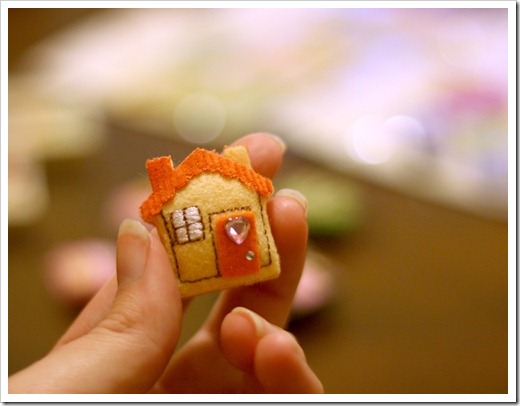 I found these super-cute sparkly shapes too. They’re hard plastic, like buttons but without the shank, and the adhesive is just a little spot of sticky foam… 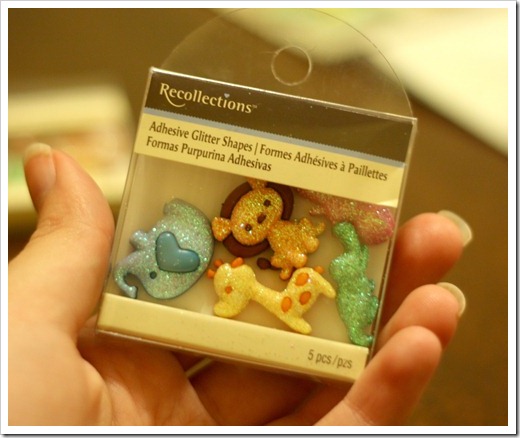 …which is quite easy to peel off. 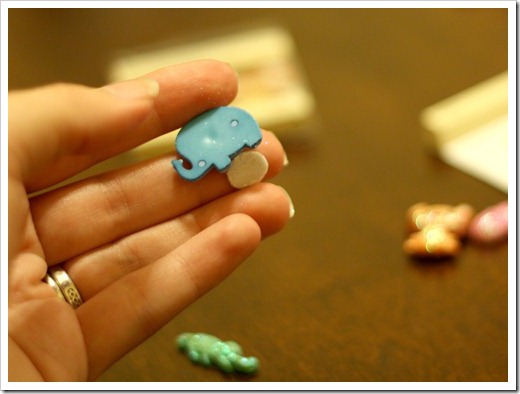 I also already had colorful buttons, dice, mini dominoes, rhinestones in various colors and shapes, and plastic magnetic letters. I was making three boxes at once, so I just made sure each one had a good variety of items. 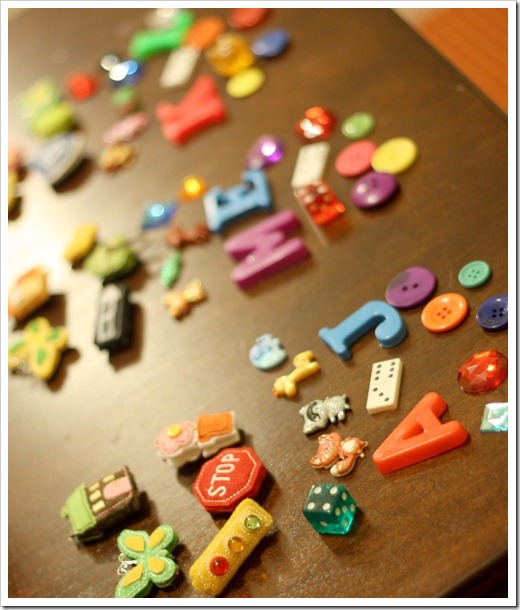 Then, on a light colored background, I made sure to take a picture of all of the items for each box. This can be used as a checklist of sorts, so that the child will know what to look for, and if you laminate it , they can circle or cross out each item as they find it, with a dry-erase or vis-Ã -vis marker.

This is Anneliese’s scavenger hunt. I put the J in there for her little brother, so they can share the box later on. 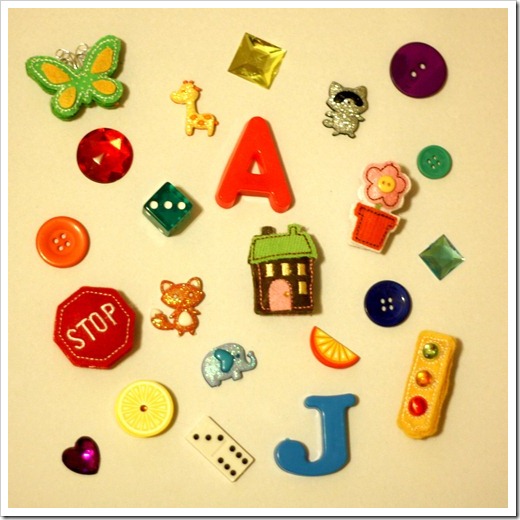 The boxes I got were just clear acrylic with simple lids. I alternated adding rice with adding objects… 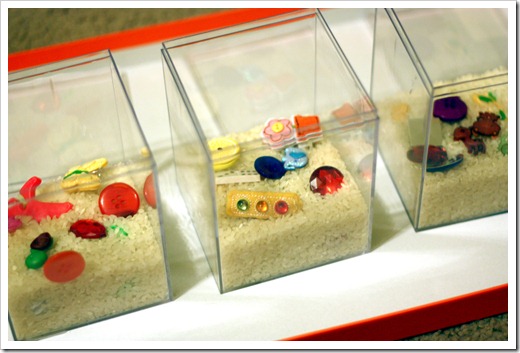 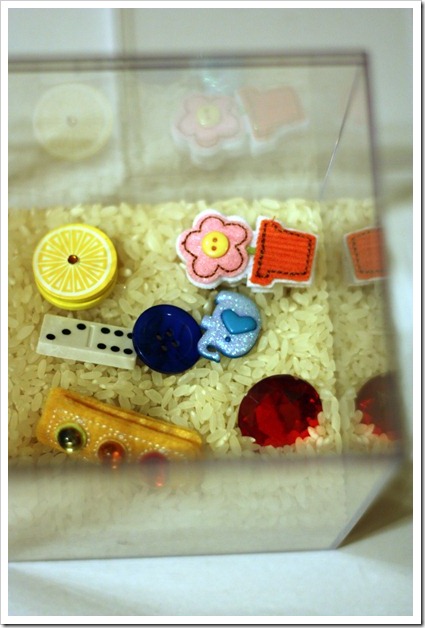 …until all of the objects were in each box, and they were about 2/3 full of rice. You want to be sure to leave enough room for the rice to move freely so the objects can be found! If it’s totally full, it won’t be a very fun game. 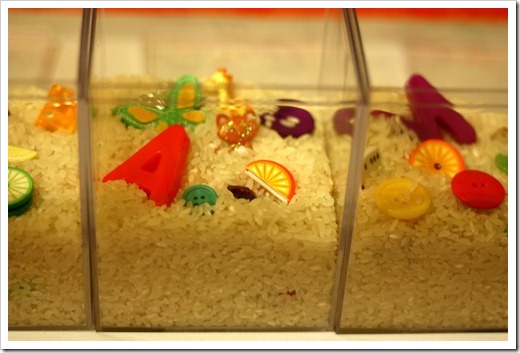 Then I used my super-hot hot glue gun to outline the inside of each lid and firmly glue it onto the box. I waited until the glue was completely dry and opaque before moving the boxes, so that no rice would get permanently stuck in the glue or anything like that. 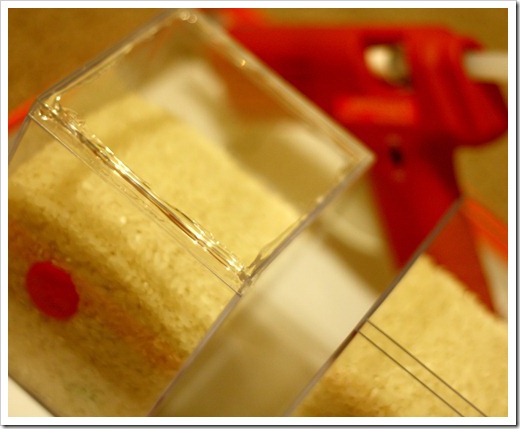 Then, on the bottom of each box, I hot-glued the object “list” (not really a list, but you know), which I had sort of laminated with clear packing tape. 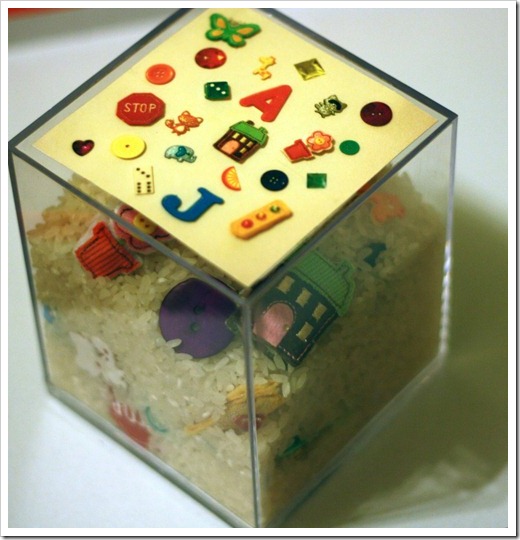 This is one toy I made this year that I don’t think Anneliese got a sneak preview of, so I haven’t seen her play with it yet. I hope she likes it! She might be a little young for it at this point but I think in a couple months it will be perfect. 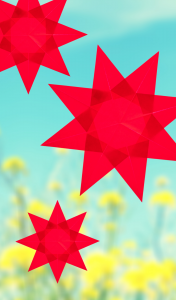 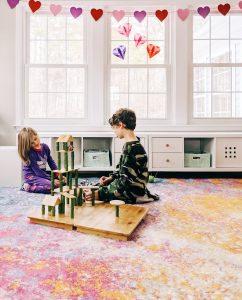