There are so many recipes out there for making potato chips.

All of them involve thin-slicing the potatoes. Anddddd… I don’t always feel like using my mandoline, and my knife skills are more than a bit lacking.

Some include baking in the oven — but the only way to get them super-crispy that way is to almost burn them (which I don’t mind, but it takes a lot of time to get there, and attention to not accidentally let them go a bit too far).

Others involve deep-frying, which results in delicious chips, but I always feel that the amount of set-up and oil involved results in not enough chips for the work. And I’m not a huge fan of cooking over hot oil if I can avoid it. It freaks me out. Spattering. AHHHH! 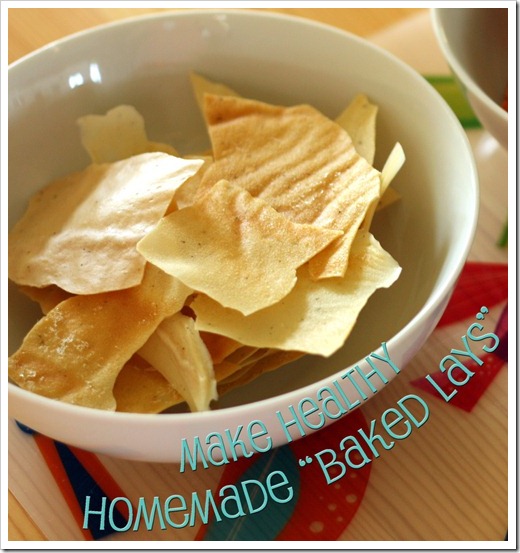 So for a while, I’ve been thinking of making some chips in the style of Pringles or Baked Lay’s. You know the ones. They’re NOT slices of potato. They’re super-thin “slabs” of potatoes, somehow made crispy!

With the help of my awesome immersion blender and my amazing dehydrator with the non-stick sheets, I did it. And now that I’ve done the experimenting one potato at a time, and found what works, I can fill up the whole dehydrator and make lots of chips at once!

Step 1: Cook your potatoes however you’d like. Bake, microwave-steam, or boil. Just make sure they’re cooked. I’ve made “potato chips” in the dehydrator before by just using raw potato slices, and they’re not good… raw potatoes really have an unpleasant starchy taste you won’t enjoy. Let the potatoes cool enough so that you can handle them, then peel. (If you’re boiling them, you could peel them first. For baking and microwave-steaming, you should leave it on for the first part.) 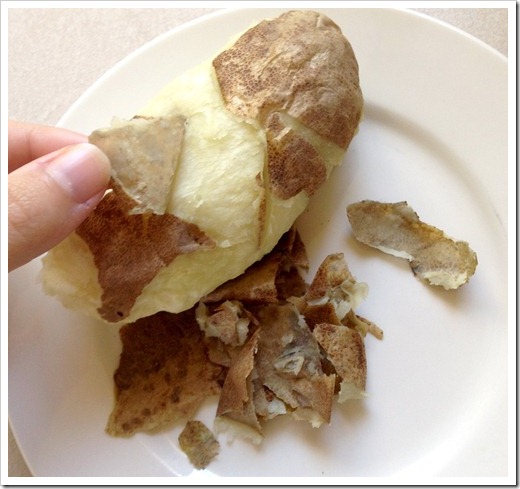 Step 2: Once your potatoes are peeled, cut them up into smaller pieces so that blending them will be easier.

Step 3: (Here you can see that I played with sweet potatoes too. They work great!) If you want to add seasonings or spices IN your chips, make sure they are very finely ground. I used a mortar and pestle to grind up some rosemary for the sweet potato chips.

This is a huge reason homemade is going to be way better than the “real” Baked Lay’s chips. You get to choose whatever fat you’re most comfortable with, instead of the corn oil that is in the factory-made ones (they also add soy lecithin, corn starch, and sugar).

Note — you CAN make them without a fat. My first batch didn’t have any added oil… but they will be a lot harder. With a fat added, they’re just as crunchy, but not as hard. If you don’t understand what I’m talking about, try it. You’ll see. The fats give them a much more pleasant texture. 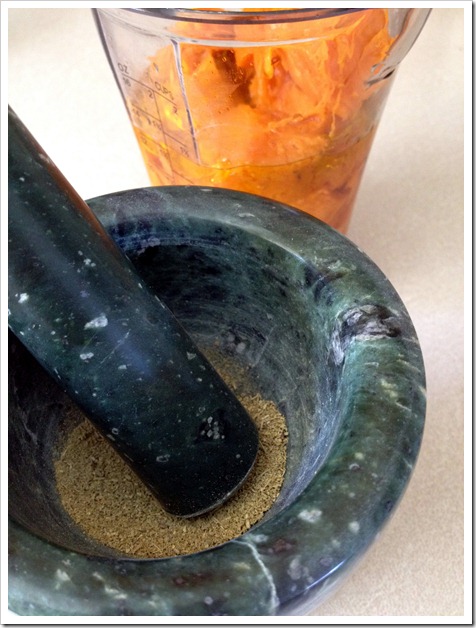 Step 4: Whir the potatoes, water, fat, and optional seasonings with your immersion blender until it looks like baby food or wallpaper paste. It’s not that attractive, but it’s what you want. 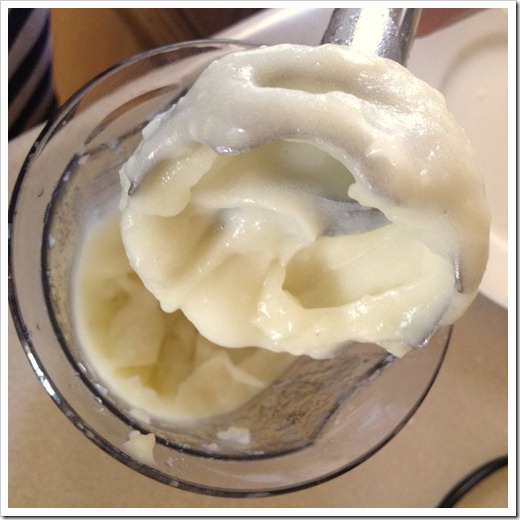 Step 5: Use a spatula to smear the potato glop onto your nonstick dehydrator sheets. Spread it as thinly as you can without making “holes” in it. You’ll be able to fit about one medium potato per sheet/tray. So if you have the 9-tray dehydrator I have, you can make about 8-10 potatoes’ worth at once. 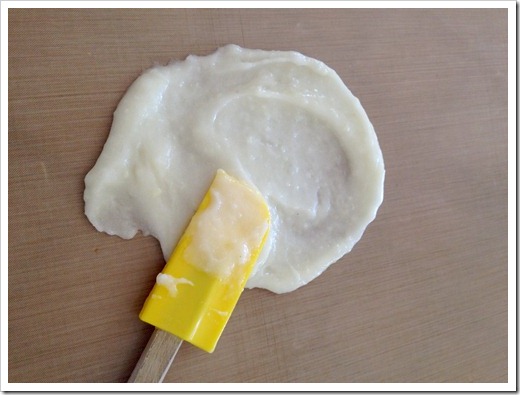 Step 6: Optional step — if you want any seasonings on top of your chips, add them now. I added sea salt to my olive oil/rosemary sweet potato chips. 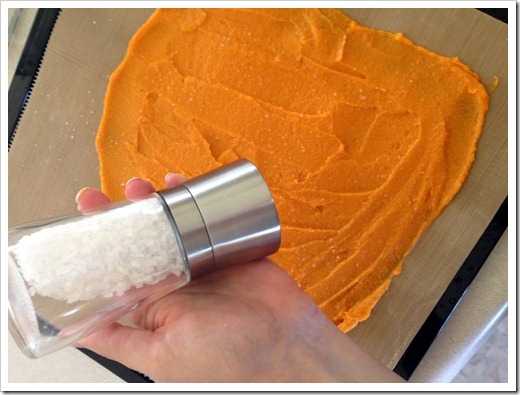 Step 7: Slide your trays into the dehydrator, and turn it on to about 145 degrees. Let them dehydrate about 6 hours, then pick up the large chip on each tray and flip it over, then dehydrate several more hours to dry completely. When I’ve made them, I got them in the dehydrator around noon, flipped them around dinner time, and took them out in the morning. But I’m SURE they don’t NEED an overnight… the timing is just convenient for me!

The sweet potatoes like to stay flat, but as they dry and shrink, they’ll get cracks in the “big chip” like this: 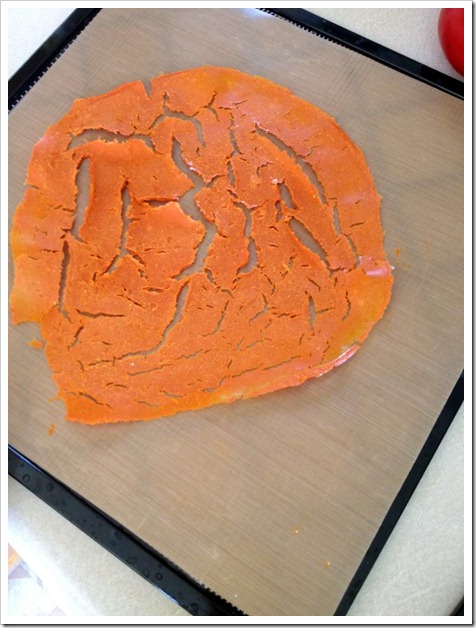 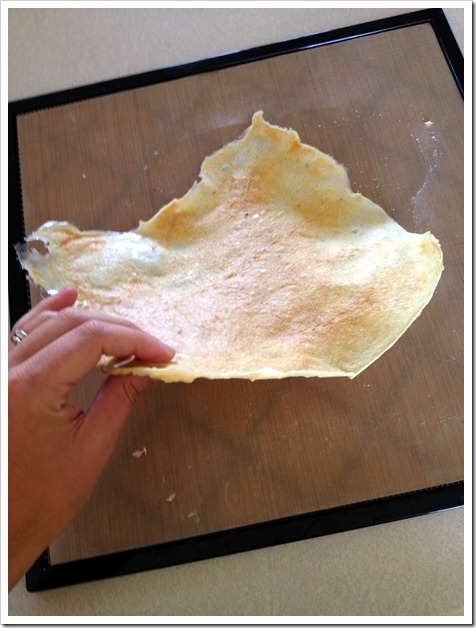 It doesn’t matter either way though. Because once the big chips are completely cool (it doesn’t take long), you break them up into smaller chips anyway. 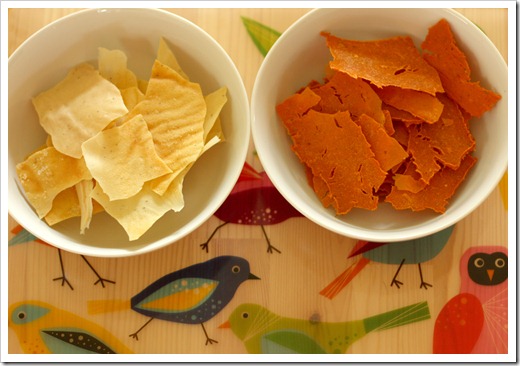 Our favorite so far is the white potato/bacon grease/Ranch seasonings combo. 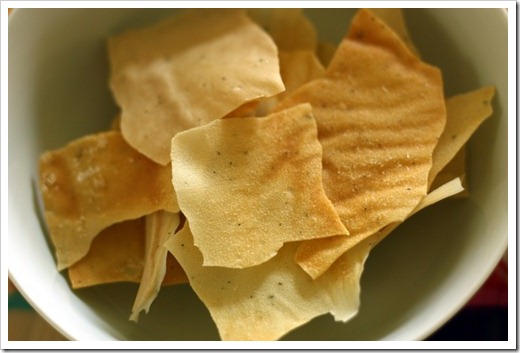 I’m excited about trying other combinations! I’ll post links here as I make each one.

What flavor combo would you want to try first?