And I promise there will be more.

So I figured it was about time to make a pie crust tutorial. I think if my mother-in-law hadn’t shown me how it’s done, I wouldn’t be so good at it! It’s not that it’s a hard recipe or anything (it’s super-easy) but if you’ve never seen each stage of the crust’s being, you might think something is going wrong and end up adding too much water, kneading (don’t knead!), or other crust-destroying things. 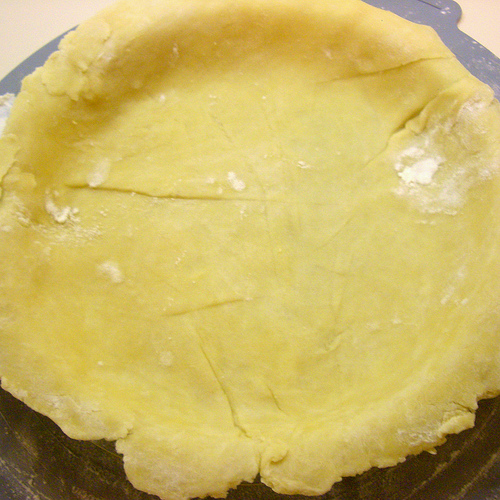 So let’s start, shall we?

Recipe for a double crust for an 8-9″ pie

Find your flour, a medium bowl, a sifter, and a measuring cup. 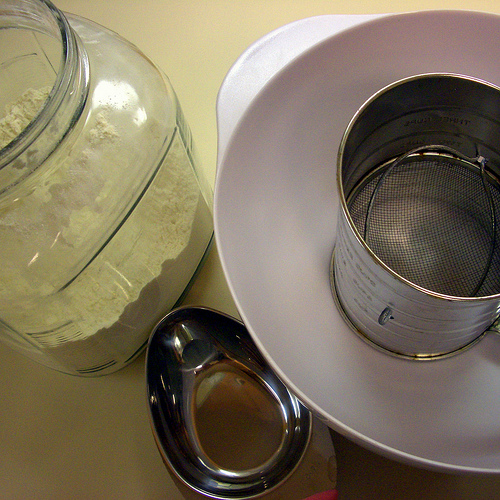 Measure 2 cups of flour into the sifter. 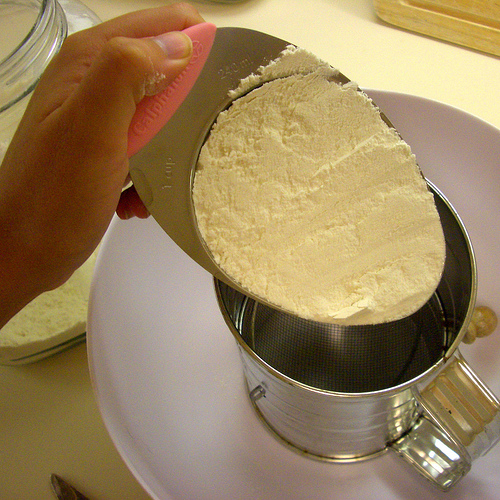 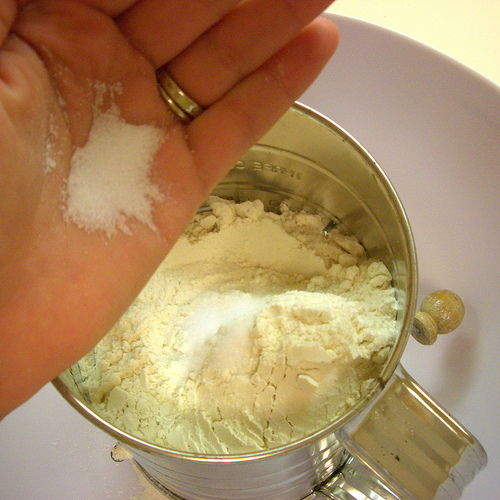 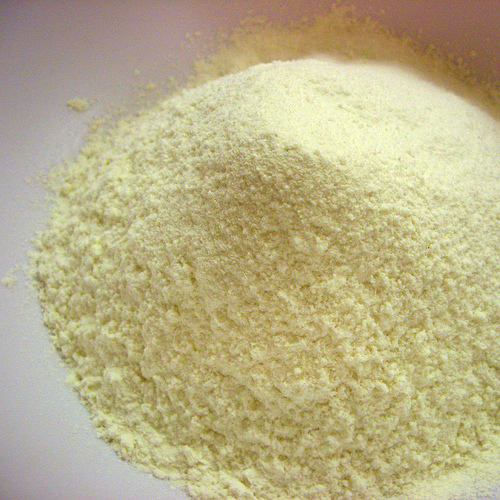 Now find some shortening (there’s no trans fat anymore… like that makes it good for you or something. hah) and a 1/3 cup measuring cup.

Measure in 2/3 cup of shortening. 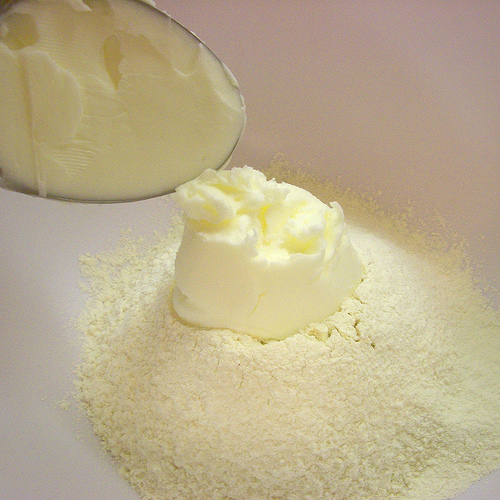 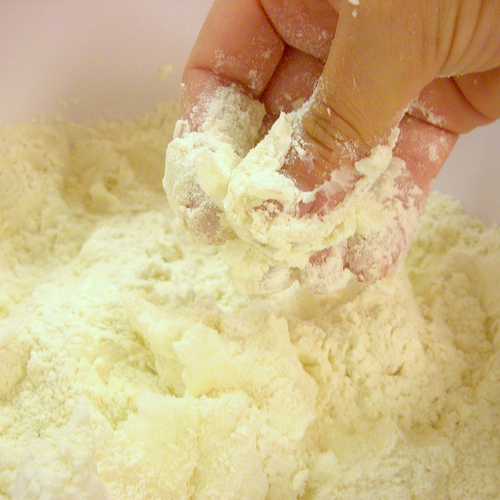 As you do this, each little morsel of shortening will get covered in flour… it should look like tiny sticky balls of dough. Not one big lump. 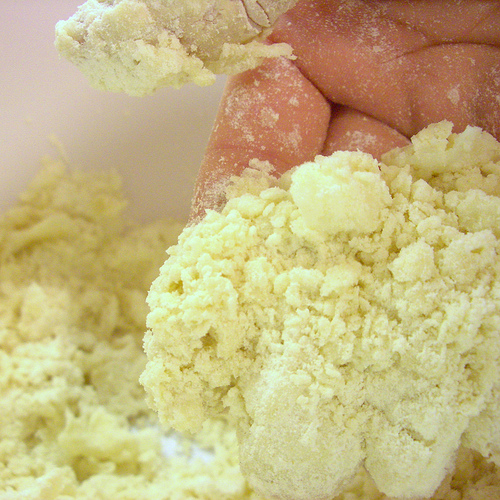 Do not worry about some lumps being different sizes… that doesn’t matter. If you overwork it though, that WILL matter. Now get out a fork and some ice water. 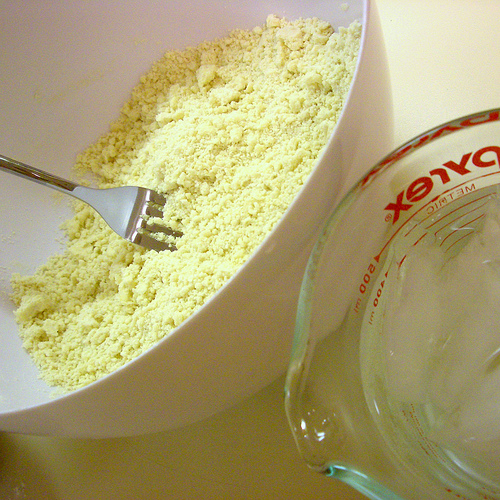 And measure out a few tablespoons of water into the flour mix. How many you end up using will depend on your location and the weather… seriously, humidity plays a big part. You can pretty safely start with 4 or 5 tablespoons of ice water, then mix quickly with the fork. Then add 1 or 2 at a time before mixing again. 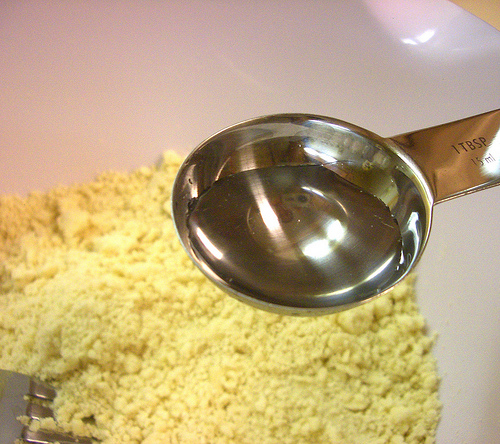 This is what it should look like when you’re finished with the water. Starting to stick together, but not wet or sticky at all. I had to use 10 Tablespoons of water today, but I think my mother-in-law usually ends up somewhere in the 4-6 range. 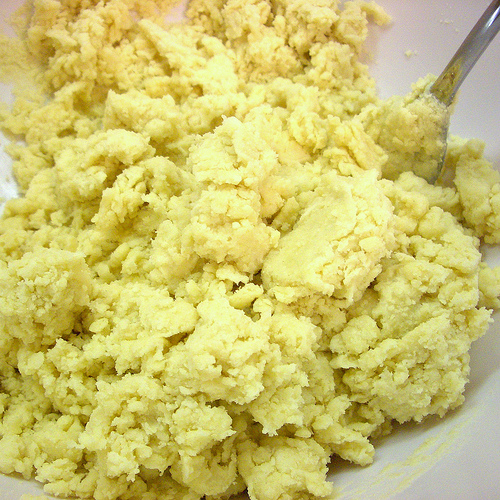 Now push the pieces together to make a lump. Don’t knead! Just push until everything sticks together. 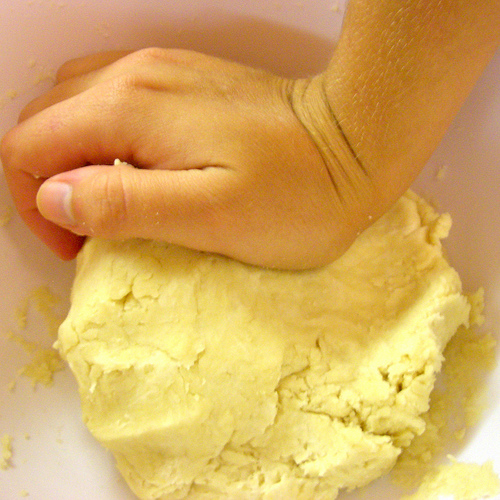 I don’t think I could make pie crust without my trusty Pampered Chef pastry roller and mat. They’re fantastic! I’ve considered selling Pampered Chef things just because of these products. 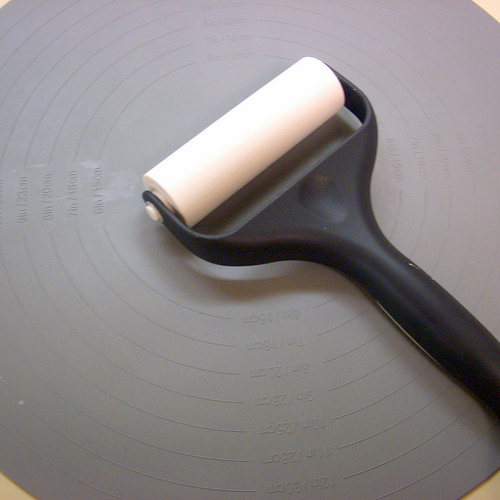 Divide your dough in half, and shape each into a ball. Roll a ball out flat… and circle-ish… 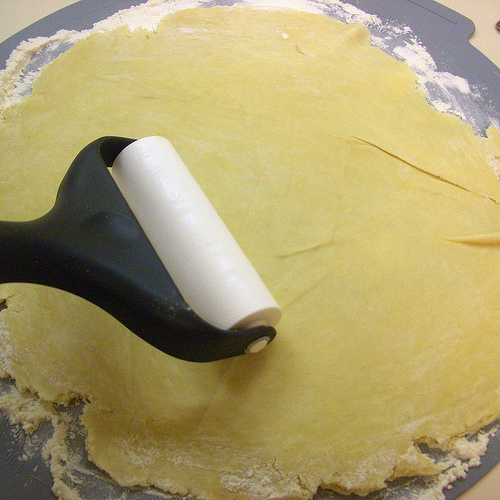 And then fold it into quarters. Why? Because this makes it so much easier to lift and… 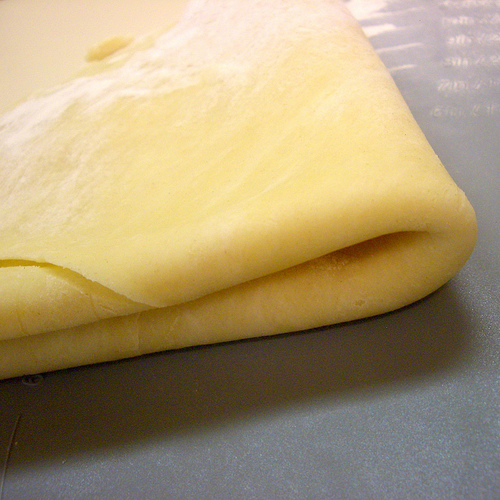 Place in your pie pan. 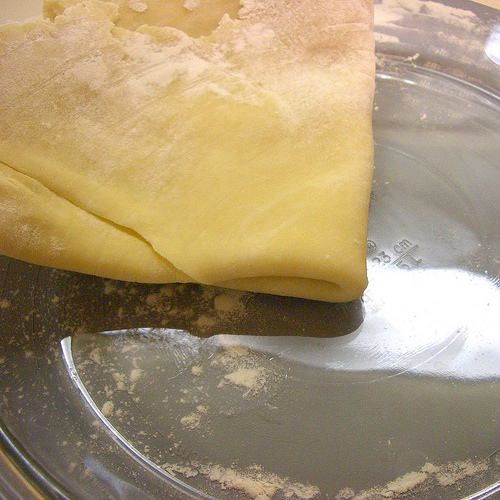 And open it up.

Here’s the recipe again, just to show you how short/easy it is. And so if you want to print it you can.

Sift the flour and salt together.

Cut in shortening until mixture resembles cornmeal or little balls.

Sprinkle 4ish Tablespoons of ice water over surface and mix lightly and quickly with a fork.

Press the dough together. Divide into 2 balls.

Roll each ball until about 3″ larger than pie pan’s diameter.

Cover with a damp cloth while preparing the filling.

Cook according to filling recipe.