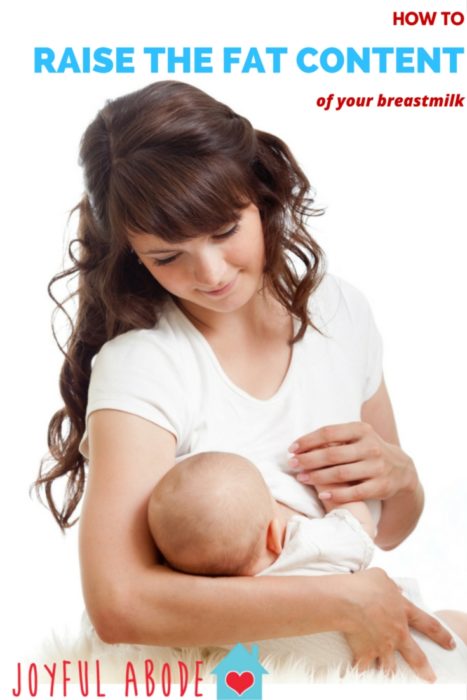 I don’t know if you’re like me… but if you’re searching for information about how to raise or increase the fat content of your breastmilk, I’m guessing we have some things in common.

You count diapers – how many pee diapers per day, how many poops. You watch your child’s developmental signs, his satisfaction after nursing. You listen for swallowing sounds, but aside from that… you just have to trust.

But as soon as you start pumping, for whatever reason – maybe you’re going back to work, or preparing for a date night, or pumping to build up a small emergency stash so you won’t have to rely on formula if “something” happens – as soon as you can SEE your breastmilk, that trust can be shaken.

Especially if you’ve seen some of your friends’ breastmilk, or pictures of breast milk online.

Do I have low fat or skim breastmilk?

Check out this photo, which I found at Biomarkers & Milk.

These are milk samples from three different women, allowed to separate. Breast milk may contain, on average, 22 calories per ounce, but I can tell you from experience (I have many breastfeeding friends, and have received donor milk from different mothers for my first son to help us through some issues), many mothers have super-creamy milk which separates to reveal a thick layer of fat in the fridge, while others have much lower-fat content.

Mine often looks like skim milk… barely creating a layer of fat on the top at all.

So, when my first son was tiny, as I was helping him recover from very slow gaining and failure to thrive due to tongue tie and lip tie (causing him to swallow air and spit up nearly everything he ate), I wanted my milk to give him as many calories as possible, along with supplementation from donor milk.

I figured his stomach could only hold so much at a time, so why not try to make it as fatty and caloric as possible?

And I looked, and looked… searching for ways to increase the fat content of my breastmilk, and I didn’t find anything useful.

What I knew was that the “first milk” or foremilk is less fatty, more like a drink to quench a baby’s thirst, and that the later milk, or hindmilk, is creamer, more like a meal for the baby, to satisfy hunger.

I wondered if I could change my diet to make my milk creamier… but all I found was that mamas can change the TYPE of fat in their milk based on their diet, but not the quantity.

So, I ate bunches of this coconut oil fudge, to increase the amount of lauric and capric  fatty acids in my milk. But still, when I pumped, I could tell the fat CONTENT hadn’t gone up.

Back to the issue of foremilk versus hindmilk… it became obvious to me that the only way to get more fat out of my breasts and into my baby would be to increase his intake of hindmilk. (Or when pumping, increase the amount of hindmilk expressed.)

I tried breast compressions, massage, heat compresses, hands-on pumping techniques. All designed to remove milk more completely from the breasts, and get more hindmilk into the baby.

And maybe it helped a little bit, but since then I’ve found one particular trick that has allowed me to pump and empty more completely, to keep my baby gulping at breast longer, and to increase the fat quantity of my breastmilk.

Whereas before, my milk fat was only ever a thin layer on the very top when my milk separated in the fridge, now I have a much thicker cream layer in my milk. It’s SO EXCITING.

It’s the same trick used by breastfeeding moms who experience clogged ducts or mastitis, when simply nursing or massaging the breasts doesn’t get the clog out.

It’s a simple supplement that can be bought on Amazon easily, for less than $10 for a month’s supply.

Sunflower lecithin helps unclog ducts that are “stuck” by making the milk more “slippery,” by emulsifying the fatty bits with the watery bits of breastmilk.

Lecithin is a food supplement that seems to help some mothers prevent blocked ducts. It may do this by decreasing the viscosity (stickiness) of the milk by increasing the percentage of polyunsaturated fatty acids in the milk. It is safe to take, relatively inexpensive, and seems to work in at least some mothers. The dose is 1200 mg four times a day.

Got that? Lecithin increases the percentage of certain fatty acids in the milk.

I’m guessing because it makes the milk “more slippery” that part of how it has increased the fat content of my milk is simply by making it easier to empty my breasts when I feed or pump.

It’s just easier for the hind-milk to come out. The fattier milk.

While massage, heat, and hands-on pumping will definitely encourage things to go in the right direction, adding Sunflower Lecithin has been the thing that has made the most noticeable increase in the fat content of my milk, personally.

I take one capsule, 3-4 times a day, so one bottle will last me a month. The Now brand of Sunflower Lecithin is non-GMO, soy-free, wheat-free, dairy-free, and contains no preservatives. So, in my opinion, a much better alternative to soy lecithin, which some breastfeeding mamas choose to use.

The pills are large, but not difficult to take, since they’re not super wide at any point (like some prenatal vitamins are).

And since it’s an emulsifier, some people put the lecithin into smoothies or drinks, saying it makes the result much smoother because the fatty bits and watery bits of the drink don’t separate as easily.

I became a fan of these and use it two capsules as follows: 1 quart of your favorite coffee brew, two NOW Sunflower Lecithin capsules, two tablespoons of coconut oil, add sweetener and half and half.

I cut the ends off the capsules and squeeze out the contents into the blender along with other ingredients. Blend at high for 30 – 60 seconds and pour into coffee mugs. There will be a layer of frothed coconut oil at the top which is absolutely delicious.

The lecithin doesn’t have much taste, if anything it is reminiscent of sunflower seeds and doesn’t alter the coffee flavor much if at all. The emulsifier acts to keep the oil and coffee from separating and creates an incredible mouth feel. A very enjoyable way to get Phosphatidyl CholineA!

I haven’t tried that yet, but I’m definitely going to, along with a few drops of hazelnut stevia or vanilla stevia. Sounds good to me! (Yes, I drink coffee while nursing – I only ever drink Equal Exchange decaf at home.)

If you give the Sunflower Lecithin a try to raise the fat content of your breastmilk, please let me know how it works for you! I hope you see great results the way I have.