This Instant Pot Beef Stew recipe has quickly become one of my family’s favorite winter dinners. Read on for the recipe!

This post contains affiliate links, which help support my family.

I got my Instant Pot 7-in-1 pressure cooker

right after Thanksgiving, and while I waffled a little bit pre-purchase, it’s my absolutely favorite kitchen “toy” now!

For a lot of people, it replaces all kinds of appliances – slow cookers, pressure cookers, rice makers, veggie steamers, and yogurt makers… acting as a real kitchen minimizer, but I didn’t have ANY of those appliances, so for me it was “one more thing.”

One more AWESOME thing. I’ve made more recipes since then than I can count. I’ve cooked a whole chicken almost every week, followed by making chicken stock. Then, I use the chicken stock in recipes throughout the week – mainly using it to make soup, but sometimes in a one-pot gluten-free pasta

dish, using it to cook rice in the Instant Pot, or adding it to sauces.

to make about 4 batches of yogurt so far, and then I strain it in my greek yogurt strainer

to make it thick the way my family likes it. Then, I use the strained whey when I make pancakes, and when I make gluten-free pizza crust

, in place of water or milk.

I’ve even used it to “boil” eggs – resulting in the easiest-to-peel-EVER eggs you can imagine. I’ll never boil another egg on the stove again! And I’ve made potato salad – cooking the potatoes and “boiling” the eggs at the same time, have “baked” potatoes and sweet potatoes in it, and so much more.

and a glass lid

so that I can use it multiple times a day without any problems. (I use the glass lid when I make yogurt, and when I put the yogurt into the fridge to cool before straining.) Plus, since the pressure cooker won’t work without the sealing ring, I’ve ordered a spare

so I’ll never be without my IP magic cooker.

All of that, to say… you’ll be seeing several Instant Pot recipes here on Joyful Abode from now on. I’m a huge fan. 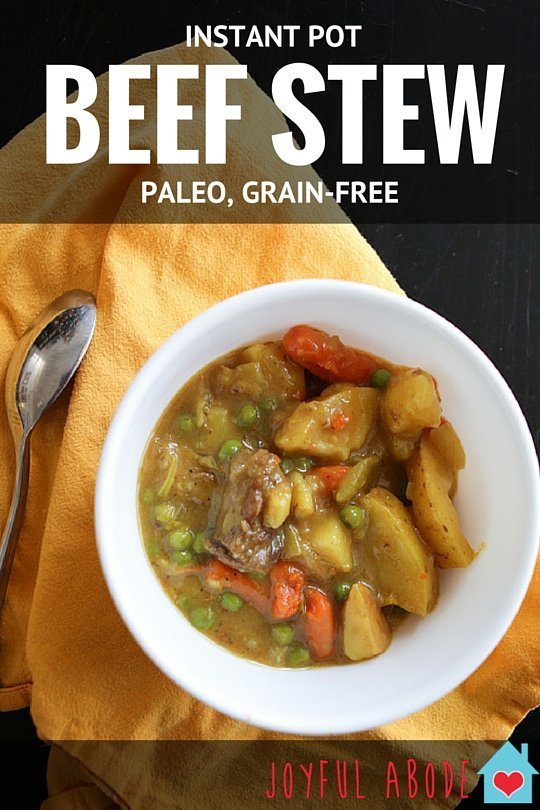 So here’s a recipe I’ve made many times already. It’s thick and warming, full of veggies, and fall-apart tender grass-fed beef (I order my beef online – link is where I order from). With just a little kick of heat to keep things interesting. 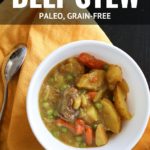