The fire fighters of Randolph Air Force Base were at the Exchange when we were there to shop, to spread the word about Kitchen Fire Safety, their theme this year for Fire Prevention Week. They gave the kids hats, and handed me a packet of information to read, along with Sparky (the fire dog) stickers for the kids.

I asked if they ever do tours at the station for kids, and they invited me to come by the next morning, to crash an elementary school's tour that was already scheduled.

So in the morning, the kids grabbed their hats and excitedly hopped into their car seats to head to the station. Both kids were a bit unsure when we were actually there. There were five classes of children, plus siblings, teachers, and parent chaperones. So I was holding Joey (I should have put him in a carrier, but thought he would want to join in with the other kids) and Anneliese was right beside me the whole time.

But the fire fighters really put on a good tour! There were a lot of hands-on and interactive activities to break up the information and talking. They had a gymnastics mat for all of the kids to practice Stop. Drop. Roll. technique. Then they demonstrated getting into their gear, and let the kids hold one of the jackets to feel how heavy it is. When the demo-ing fire fighter was all dressed up, he knelt down to let the kids pat him, so that they wouldn't be afraid of a fire fighter in full gear if they ever needed to be rescued from a burning building.

They had pressurized water bottles so the kids could practice putting out “fires” (small traffic cones), which the kindergarteners loved, but my kids weren't interested in trying. 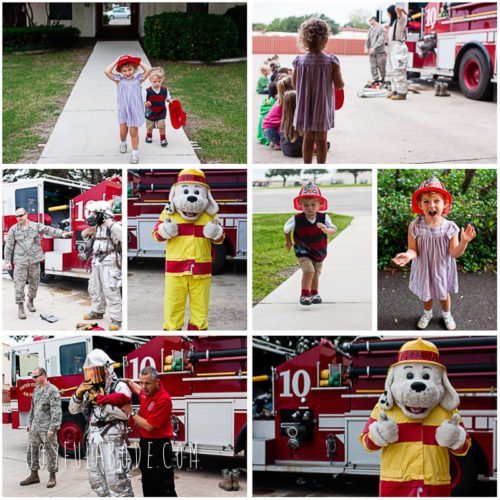 When Sparky came out, that was the last straw for my kids. The mascot costume was just too much. And I have to admit, the fear of people in disguise who invite you to hug and pet them… is probably a little bit of a healthy fear. Anneliese took off running down the hallway, sobbing, and Joseph clung to my body attempting to climb to my head. So I chased Anneliese down and put both kids back into the car.

I asked Sparky for a photo after, and he gave “Two thumbs up for scaring the sh*t out of your kids.” (Not really, but that's kind of what it looked like 30 seconds after my kids were both so frightened, and it made me laugh a lot.)

Another fire fighter saw me loading the kids into the car, and brought me some new hats for them since both of their other ones had cracked. So sweet!

Of course, when we got back to the apartment, both kids were super excited about their hats and acted as though they had had the Best! Field trip! Ever! Anneliese said, “The fire station was SO MUCH FUN!” so I'd call it a success.

Thanks, Randolph Air Force Base Fire Station, for an awesome tour and field trip.