Yesterday, during lunch, Anneliese asked me for a straw because she saw me drinking water from my Starbucks cup w/straw. So I trimmed a big straw into a baby straw. She said, “whoa. Ffaw! Wahwah ffah!” (Whoa. Straw! Water straw!) At dinner, she asked for a straw again, and I was happy to accommodate her wishes. 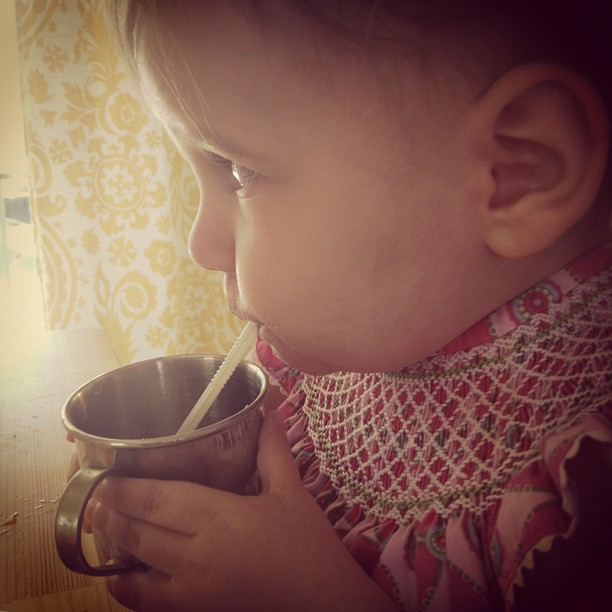 At bedtime, I like to recap the day for her while we snuggle and nurse. Normally she just listens while she nurses… but last night when I started to tell her about lunch… “Then we had lunch! You had a banana, and some ham, and peas…” she joined in and said excitedly, “wahwah ffah!!”

Until then, I never really knew if she “got” what I was doing when I recapped the day at bedtime… now I know. She totally does. AND she remembers things she feels are significant. It might seem like a small thing, but I LOVE that she can use language to communicate stuff like this, instead of just identifying objects or telling me something she wants. Language to talk about an event in the past? Way cool.

Today while we played outside before dinner, a neighbor’s little boy came over and played with Zora, then started kicking Anneliese’s ball around the yard. He would kick it in one direction, chase after it, then kick it back. He did this for a while and Anneliese thought it was hilarious. At one point, he gently kicked it to her, and she baby-kicked it (it moved like an inch) before giggling and running back to her Dada.

So tonight during my running recap, she joined in twice. The first time, she said, “Dada!” (He has been working long hours and she hasn’t seen him much lately, so him being home in time for dinner and before she went to bed was special today.) The second time, she said, “Baybee…ball!” (She calls every kid a baby, even the 5th graders playing at the elementary school near our house at recess.) Watching the boy play with her ball, and getting to play with him a little was a significant part of her day, I suppose. Something different and exciting.