San Antonio Zoo with Kids- The Good and the Bad

I asked on Facebook a little while ago, what everyone thought about zoos.

The answers were really mixed, and my feelings have been too. Sometimes it’s hard to tell… some zoos really seem respectful of the animals and try to recreate habitats similar to what the animals would have in the wild, giving them ample opportunities for play and even “hunting” for hidden food, companionship, and include places to hide when the animals want privacy.

Some zoos are really rehabilitation centers which will release the animals once they’re ready, or provide permanent homes for animals (maybe injured) who wouldn’t survive in the wild. Some really have a more wildlife-like habitat, like Bearizona. Even so, I’m always kind of amazed at the animals’ diets in zoos… almost always nothing like what they’d be eating in the wild.

So let’s start with the good at the San Antonio, TX Zoo. There’s a cute little kids’ area… I forget what it was called. Something like Tot Spot or similar. There was a sandbox with toys, a pretend porch (no house attached) for the kids to sweep, which was decorated for Halloween with fake spiderwebs and a pumpkin. Chickens and a tortoise lived near the building in that area, which housed a children’s museum-like play area, with a pretend store, dress-up clothes, and a toddler climbing area. 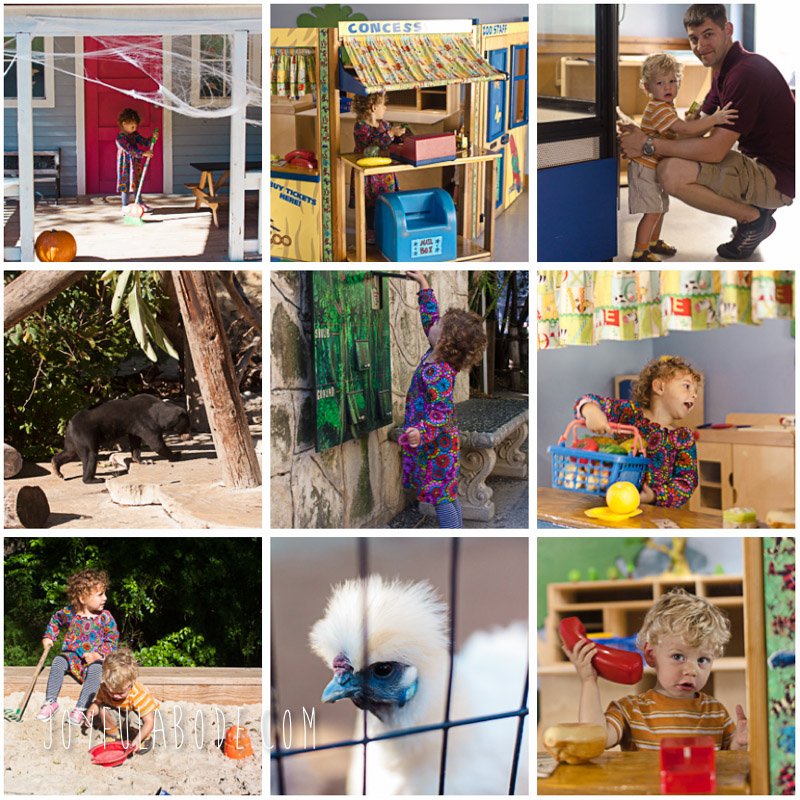 But… really… if I wanted to take my kids to a children’s museum, I would (I did), and it would be way way nicer than this area, which looked unkempt and run-down. Maybe the kids’ activities in the courtyard were worthwhile? I don’t know. I saw an elementary-aged child come back from the courtyard with a bird feeder she had made. It was peanut butter and birdseed on a toilet paper tube. My first thought was, “Super, now she or her parents have to carry a sticky feeder throughout the rest of the zoo all day.” Then, “They’re bringing home someone else’s bathroom trash.”

The best part of seeing the animals was the sweet mama tiger playing with and cleaning her new cubs (top left, below). But really, the animal enclosures mostly made me sad. So sad for the animals, and even sad for the animal-loving professionals who cared for them (who MUST know the facilities are less than ideal) and for everyone who visited, hoping to see and learn about happy animals and different types of habitats around the world.

The horned animals in the top-center picture below (sorry, I forgot their names. Anneliese swears they’re goats. They’re not.) CLEARLY belong in some sort of grasslands. Instead, I kid you not, they were in a hard concrete amphitheater-like setting. Other animals who clearly wanted shade had very little of it. ALL of the water was murky, including a rivery thing full of fish and the aquarium (I’m smiling there in the photo, but I’m pretty pissed about everything I had seen so far).

This poor wild dog, center, below, was definitely exhibiting anxiety, running over and over in the same loop, with the path he had formed worn pretty deep… this wasn’t his first time running those circles. Other bystanders even commented on it, and all basically walked away muttering, “That poor dog.”

The elephant was in another really hard, unvaried landscape. She was eating a smashed pumpkin and looking bored. There really wasn’t anything for her to do in there. Compared with the toys, games, and interesting terrain provided for the elephants in Fresno, CA (the last zoo we’ve been to before this one), it was really shocking to see. 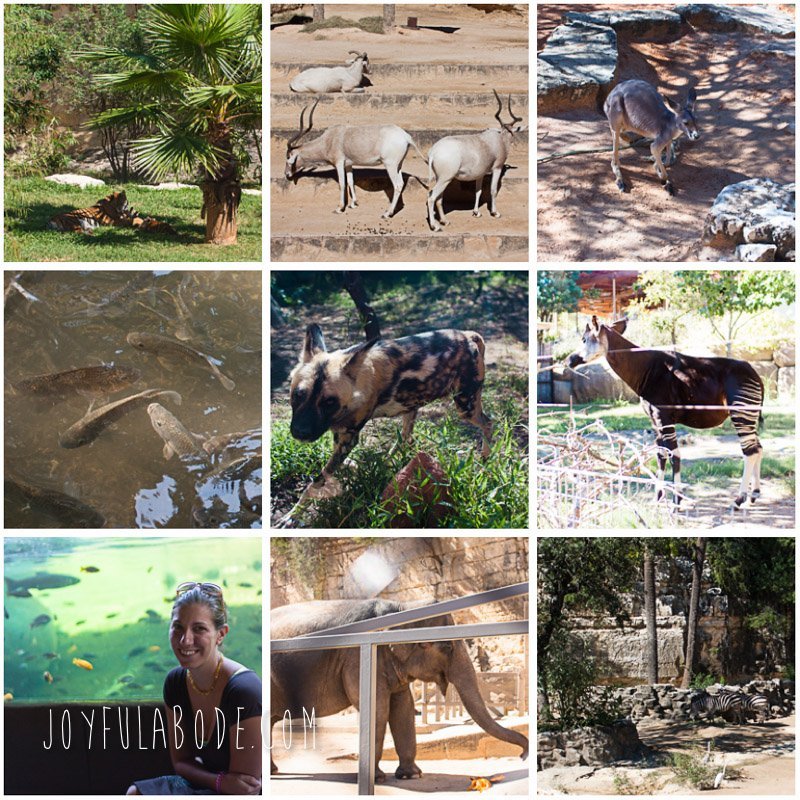 I know the zoo is old. From back in the day when zoos WERE just places to gawk at the collection of animals you wouldn’t normally see. And it’s difficult, time consuming, and expensive to update such huge facilities. There were signs about excusing their mess while they update facilities (for people, not for the animals), and WAY more commercial stands than I have seen at any zoo, ever. (Squishing penny machines, dippin dots ice cream, candy corn, machines where you can make molded plastic toys for $2, restaurants, and more.) This zoo absolutely looked like it was struggling in all areas.

But when should a zoo just decide to cut their losses, rehome the animals in better-equipped places, and sell the property? 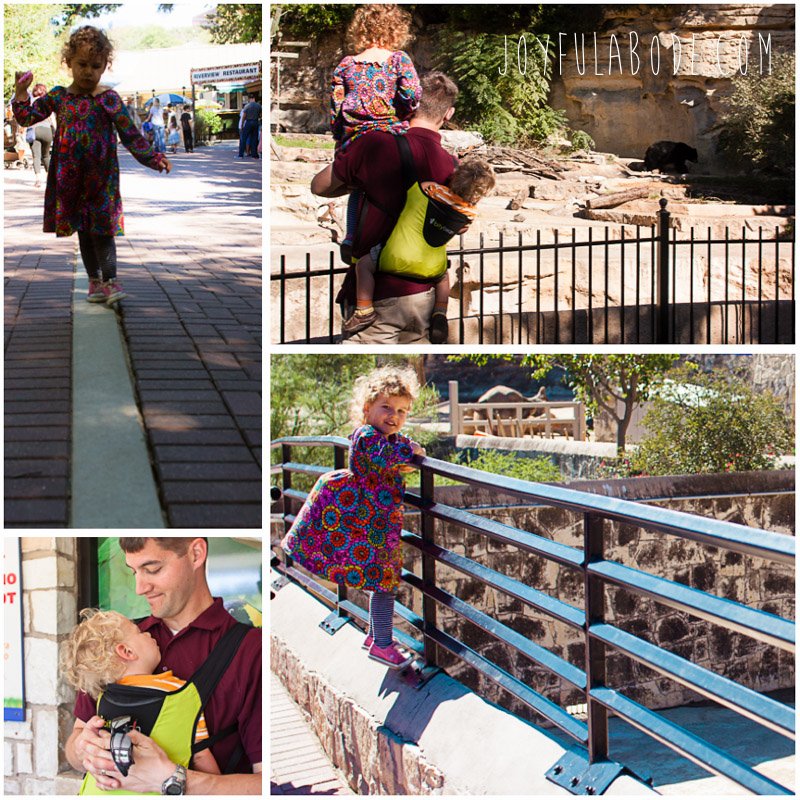 I saved the best for last. The Zoo train was pretty awesome. The first train was a 1/5-scale model of the diesel-type passenger train developed by General Motors. But there are now three trains traveling along the 5-mile 20-minute loop, and we got to ride the newest of them, the Lukey. A $3.50 ticket (free for kids 2 and under) buys you a round-trip loop which stops at Witte Museum, a Kiddie Park, and the Japanese Tea Gardens. We didn’t stop at all, since as you can see from Joey’s face below (snuggling my husband’s chest while we rode the train), he was FINISHED, just completely worn out from the day. But if you wanted to, you could explore each stop and then hitch a ride on the next train to come by.

Anneliese was absoultely thrilled about the ride. She just couldn’t believe we were on a real train! On a real track! And we went over a real bridge! And we were going SO FAST! And it was a LONG ride (as compared with the minute-long rides she experienced at Sea World – and no, I haven’t watched the documentary yet)!

This simple loop was the most fun thing, and it’s not even inside the zoo. So skip the admission fees, depressed animals, and dilapidated kids’ area, and just hitch a ride to a few fun stops. I think that would be the advice of our whole family. Or just spend the day somewhere else. 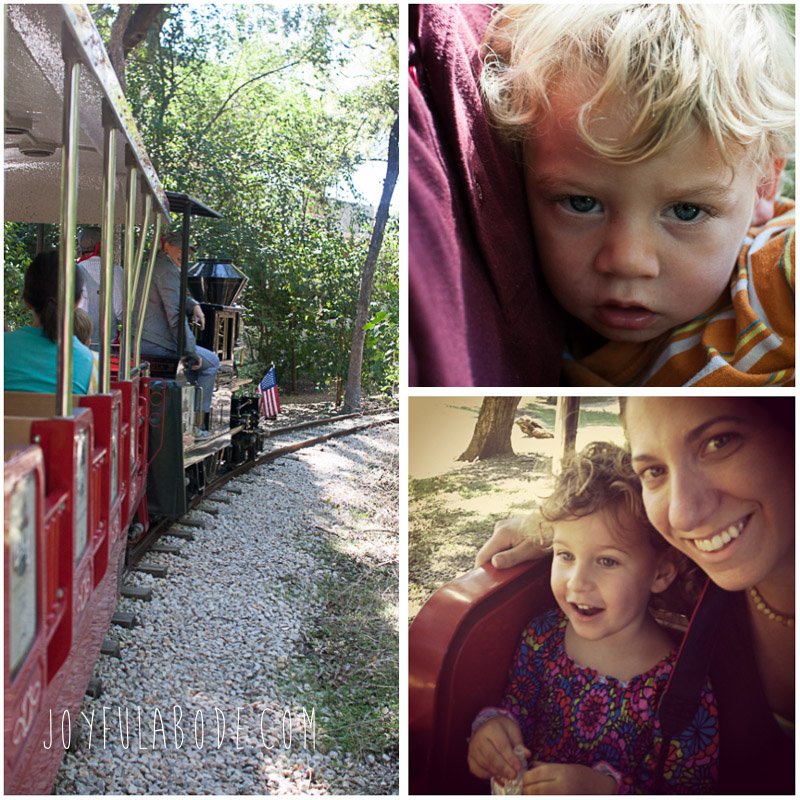