Sleeping Like A Baby? Tips and Tricks for Newborn Sleep

I’m far from a baby sleep expert. I’m on Twitter a lot in the middle of the night, while nursing or soothing awake babies (well, not Anneliese anymore, but when she was littler, yes), or just being awake while a wide-awake baby plays nearby.

So I figured I’d ask my Twitter pals what their newborn sleep tips are. There are definitely some common threads. 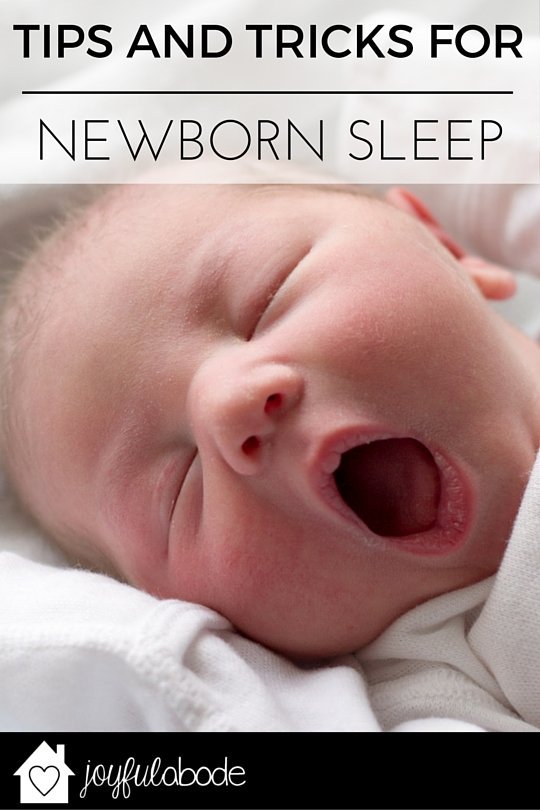 I know this was one of my oldest sister’s tricks. She told me she became quite adept at sneakily unclipping the Ergo and laying her babies down on the bed without waking them. A couple of mamas I follow on Instagram post pictures of their middle-of-the-night wrapping jobs.

Obviously it’s not the safest thing to babywear WHILE sleeping (yeah, just don’t do it), but as a tool to get your baby to fall asleep at night before you transfer him to bed, or as a wonderful place for daytime naps, babywearing is a great tool to have in your back pocket.

The statistics say that breastfeeding moms get more sleep at night than bottle-feeding moms (not only is there no preparation or clean-up, but the hormones involved make it easier for mom to fall asleep quickly afterward, especially in the first months). Add to that cosleeping, or bedsharing, and you have the recipe for lots more rest for everyone involved.

Be sure to follow guidelines for safe cosleeping if you choose to try it out, and never cosleep if you’re under the influence of alcohol (or drugs), extremely overweight, or overtired.

Keep day and night clearly defined. Most babies are born with their days and nights “backwards.” They’ll seem to sleep all day and be up all night. Who knows why, but it does serve a purpose in the beginning as your prolactin levels are highest at night, and night nursing will help to bring in your milk and establish a good milk supply. However, this isn’t a pattern you’ll want to continue for too long. We are, after all, not vampires.

So help baby recognize the daytime by getting some sunlight first thing in the morning, turning on the lights, using upbeat music, and playing games. Tummy raspberries during diaper changes are fair game.

During night wakings, keep things low-key. If you need to turn on lights, keep them dim (I used a red lightbulb in my bedside lamp when my daughter was a baby, which was enough so that I could see to make sure we had a good latch, but kept our eyes adjusted to the dark). Diaper changes should be “all business,” not accompanied by nursery rhymes and tummy tickles at night.

@dancingmama1 says, “my best advice is swaddling and white noise. Lexi would never have slept without both!”

@jumpthenextrain says, “swaddle, paci, and he would be out.”

I totally agree… white noise helped both of my kids, and while they can sleep without it, both of them sleep better and longer with it. Same thing with swaddling. My 2 year old now asks to be “tucked in” tightly each night to help her fall asleep. It definitely works for some kids.

@anewhistory says, “White noise, lots of skin to skin time, and using disposable diapers at night for the first month or so.”

You’ll get your skin to skin time if you co-sleep without a shirt on, and it makes nursing that much easier too (unless you’re a leaker, in which case you’ll probably want a nursing tank or cami style bra, with absorbent breast pads).

The diapers thing is a great tip too… My daughter was 100% cloth diapered for a long time, and that meant several diaper changes each night. She was unfortunately never one to sleep through diaper changes. On the contrary; they woke her up completely, even if we kept them low-key.

Disposable diapers, on the other hand, are super-absorbent and feel dry even with a lot of pee in them, so you won’t need to disrupt baby’s sleep as much if you go with that for nighttime. I have to say, skipping nighttime changes (unless there is poop of course) is a huge perk of disposables.

Hey, it can’t hurt to ask for a little divine intervention, right?

@DianaParDue says, “I rather forcefully rock… in my arms… works every time. Oh and also lots of nursing.”

I think every baby has its own combination-lock pattern of bouncing/rocking/swaying that will work. It might take some trial and error, but if you can decode your baby’s movement requirement, it is super-helpful.

I sense a subscriber to “Happiest Baby on the Block” techniques. Swaddle, swinging, sucking (nursing or a paci), shushing sounds, side/stomach position (not unattended). All good tools to have on hand, for sure.

@BecomingGranola says, “switch up blankets and sleep toy so baby doesn’t absolutely NEED a specific one in order to sleep.”

Ah, this age-old debate. Create a routine complete with consistent “lovie”? Or switch things up in an attempt to keep baby flexible? Honestly, for a newborn, the only routine/lovie they’ll probably rely on is YOU. You can work out the kinks in the rest later.

And when all else fails?

Just remember you and baby will both eventually reach a sleeping routine that works.

Check out the Huggies Mommy Answers Facebook app and find more posts from bloggers sharing their experiences of motherhood on the Huggies page on BlogHer.com.