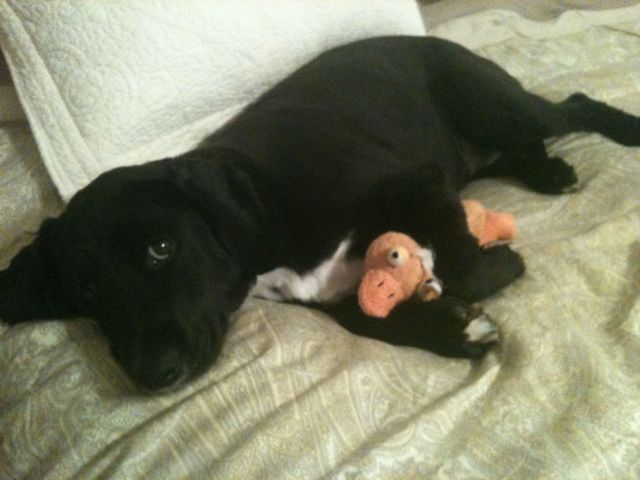 Zora has always chewed up her toys and destroyed them if she could. Tennis balls don’t last long in this house, because she will use her front teeth to pick off all the fuzz and EAT it. If we don’t catch her in time she might even use her back teeth to chomp the ball into pieces.

When we first adopted Zora, my mother sent a box full of goodies for her “granddoggie” … innocent looking “puppy toys” which each lasted a maximum of 15-20 minutes before they were reduced to a pile of strings / scattering of rubber / mound of fluff.

We got her a “tire biter” toy which was supposed to be extremely heavy duty, but during the first (supervised) 20 minutes, she managed to shred part of it and she was up all night vomiting – evidently the “non toxic” toy was toxic to her.

When she was a puppy, we had a pillow in her crate for her to sleep on. Everything was fine until one morning when she had decided she was bored in there (despite also having a Kong toy to chew on in her crate) and chewed the entire thing to pieces… part of the zipper was missing, the inner pillow was pulled out and opened, and fluff was everywhere.

There was another day during her first months with us when she was sitting on the couch watching a movie with us, innocently chewing on her paw (she likes to do that sometimes). Except that when I stood up, a good 2 inch square chunk of my dress was missing from the hem. She hadn’t just chewed up my dress – she had EATEN part of it! Black dress + black puppy = hard to tell what is paw and what is dress.

We’ve tried several soft toys because they’re oh so cute, but they’d typically last 15 minutes unsupervised, or a few days if we only gave them to her under strong supervision (taking them away if she got too rough, but eventually she manages to look peaceful and innocent as she secretly chews seams open and pulls out stuffing).

But this duck? I think I paid $3 for it in the clearance bin at PetSmart. It’s terry cloth and adorable, and has a squeaker in it. At first we only used it as an incentive for her to come back indoors after going out for a pee break. It was her special “yay you came back in!” toy. We’d let her play with it for a minute or two upon coming in, then take it away. So aside from chewing one of the eyeballs open, no damage was done for a long time. Then something happened…

We forgot to put the toy away. But she didn’t destroy it. She would carry it around in her mouth, or sometimes RUN into another room and return with it, like she had remembered she missed her duckie and wanted to be near it… and if she started getting a little too rough with it we’d say, “Zora, be gentle.” and she would usually stop chewing and put her chin on the floor beside the duck.

Sweetest thing. This picture was taken one morning (after a recent haircut – isn’t she so cute with short fur like that? So silky!)… usually in the mornings she’ll cuddle in bed with me for a little while before I get up. If my husband goes to work before I wake up, he’ll usually take Zora out to pee, then feed her breakfast, and let her on the bed. Well this particular morning I woke up and she wasn’t in the room at all. I called to her, and she came running from the living room (probably lounging on the couch) into the bedroom, then jumped on the bed.

She looked around and jumped back down, and a second later she reappeared with the duckie toy! The duck had survived several days of being a “free toy” by this point, and she often just wanted it to be near her even if she wasn’t actively chewing it.

Sadly, a couple days later, she got a bit aggressive with it and chewed open one of the legs. I will mend it so she can still play with it… but this is the longest-lasting soft toy she’s ever had. Her ONLY other toys (besides a tennis ball for playing fetch, but never unsupervised) are Kong toys, which are almost indestructible. It has been absolutely sweet to see her be so gentle with a toy and become so “attached” to it (I don’t know if she has emotions about the toy or not, but she certainly enjoys it). I just had to share the sweetness with you all!