I think this is the last “make and freeze” recipe I had saved up from when I was pregnant. We got a huge bag of potatoes and I did various things with them, so they’d be available for quick meals, sides, or snacks when I was going to be occupied with a newborn and too busy to think about cooking much. 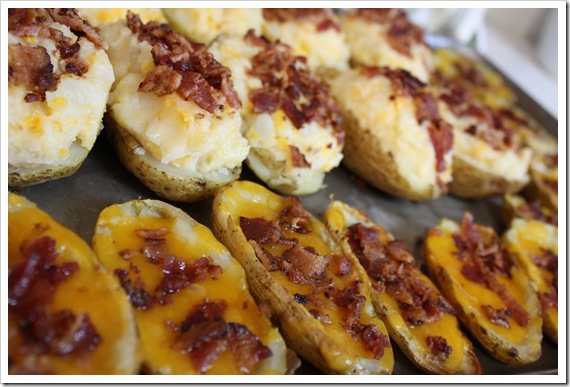 First, I washed and baked all the potatoes. Poke holes in them so they won’t explode, and bake at 400 degrees Fahrenheit for about 40-60 minutes depending on how big the potatoes are.

Then I let them cool for a while so they were cool enough to hold. I cut each in half and scooped out the innards into a pot, using a soup spoon and being careful not to break the skin.

I dumped some things into the potato guts to make them taste amazing (and to make them have more worthwhile ingredients/foods in them) — chicken stock, butter, cheddar cheese, onion powder, garlic salt. Basically you can add whatever you feel like. Stir it really well!

Then, I filled the bigger potato skins with the potato mixture (overfilling them) and topped with crumbled bacon, gently pressing the bacon into the top a little so it wouldn’t fall off.

With the smaller skins, I  put some cheddar cheese in each one, and topped with bacon. So that the bacon wouldn’t fall off when I froze them, I broiled these for a couple minutes just to melt the cheese.

If you want to freeze these, put them all on a cookie sheet and freeze unwrapped so they will be like little blocks of ice that will hold their shape instead of squishing… then once they’re frozen solid, vacuum-seal them in serving-size packages. I put 2 twice baked potatoes in some packages, and packed some by themselves. I did the same with the skins — some packages of 4, some of 8. That way, if my husband and I were eating together, we could take out a bigger package, but while he was away I didn’t have to thaw so much. 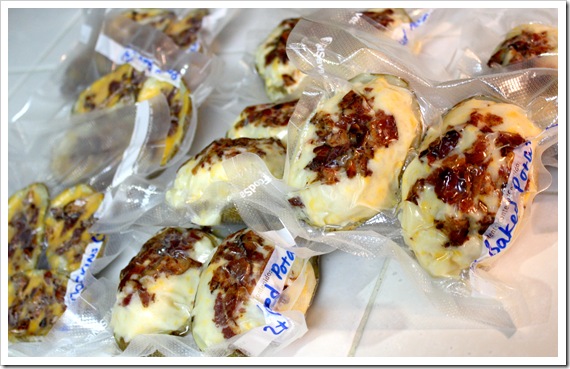 To reheat — just warm up your oven (350ish is good), pop these suckers on a foil-lined cookie sheet (unwrapped of course, no plastic) and heat through. The twice baked potatoes take about 30-40 minutes from a frozen state, and the skins only take 15-20 minutes.

These would be great to make in batches and have on hand any time, not just for postpartum. They make a great addition to meals, or serve as an easy snack.