My other post about how to make a hammock out of your woven wraps has been pinned a billion times on Pinterest, stolen and republished without permission (creepy… that’s my kid, you guys. don’t DO that. And not okay to steal anyway) and shared WITH permission by buzzfeed and apartment therapy.

THANK YOU to everyone who has sent the link to a friend, shared the link to my actual post on facebook (instead of copying and republishing the photo), tweeted, pinned, commented on, and shared that post. I LOVE when you guys are as enthusiastic about an idea as I am and want to let other people know about my blog.
Often, the photo is shared on facebook without any context, and people speculate about how they can do it with a bedhsheet, some cheap fabric, or something else they have “lying around.” Other people gasp and declare that it’s an accident waiting to happen.

Well, let me clear up some things really quickly, before sharing my next woven wrap activity with you:

SO! Here is the next AWESOME wrap project. How to make a woven wrap swing! The same tips above apply: 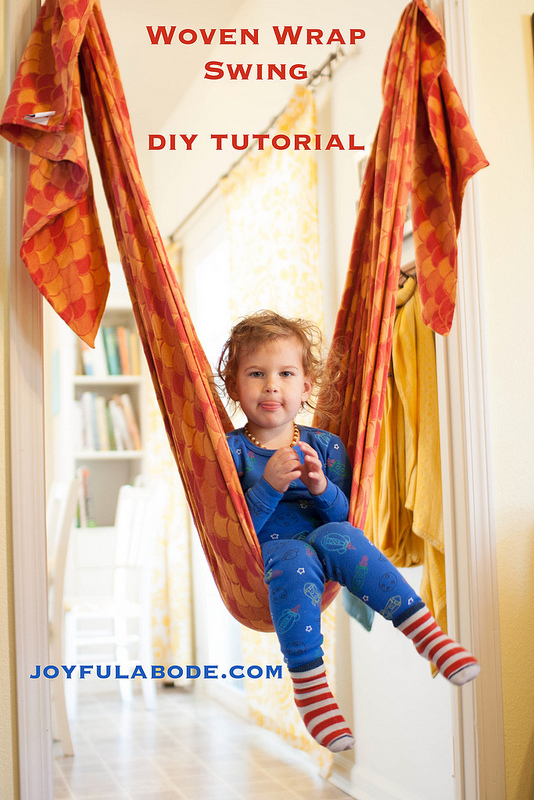 The wrap above is Kokadi Feuerschuppen (Fire Scales) in a size 4. The one below is Girasol Snowflame twill weave (I don’t think it comes in diamond weave) in a size 5. Both are 100% cotton.
The fire scales wrap is a little “crunchy” since it’s brand new and it is woven differently than my other (soft from the get-go) kokadi wraps. So I’m happy to have the help with breaking it in! Especially since it is too short for table hammocks! 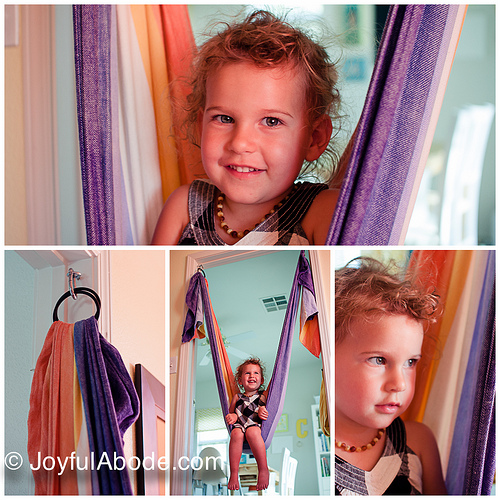 You can use a stud in the ceiling if you want, just the same way you would hang any commercial hammock chair, but we chose to use the doorframe because it is convenient and easy to reach for switching out wraps and adjusting. 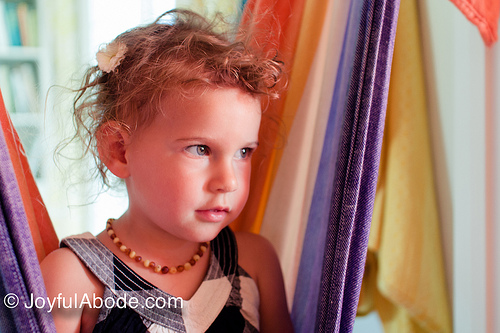 To make a woven wrap swing, you need: 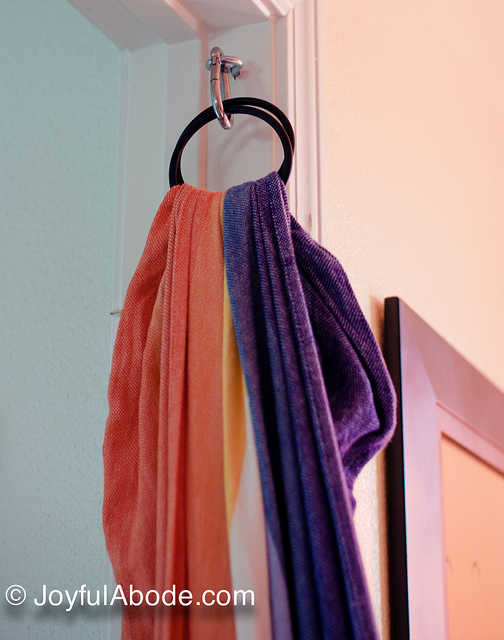 Install your eye screws into your doorframe or studs, and clip your carabiners onto each one.

Take each end of the wrap and thread through both rings, then back through one of them, just as you would with a web belt or a ring sling. Make sure the fabric remains spread out within the rings instead of folded over on itself or bunched up. Make the rails (edges) a bit tighter/shorter than the middle section, so that the seat will be lower in the center. I made the back rail (in the photos below, the orange one) even tighter/shorter than the front one, so that Anneliese could lean back a little bit and still be supported.

For Joseph, (my just-turned-one-year-old) I put him in it more like a regular hammock, with his head and feet going across the doorframe instead of facing forward. I also stay very close by to “spot” him, which is why there are no photos of him in it. Anneliese likes to do that too, but the regular swing is more comfortable for her since she is taller. 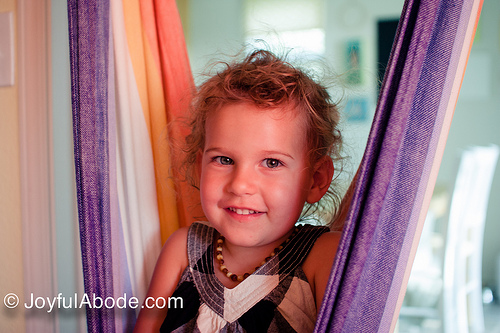 Anneliese wanted to go VERY HIGH in this swing like she does outside, but I simply explained to her that the swing inside is a swing for gentle relaxing swinging, not crazy high swinging. She was cool with that. See? Common sense = safety.
I hope you make a woven wrap swing soon, whether it is to break in your new wraps, or just to have fun.
And I hate that I have to say this, but… Please share this post on pinterest, facebook, twitter, or wherever else by LINKING to my URL, not by copying the photos and re-posting them.

You may also be interested in these great natural parenting items: 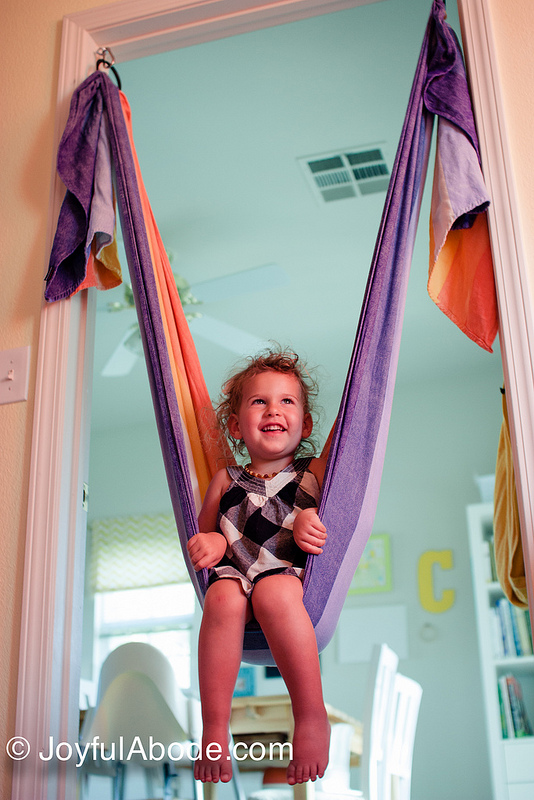 PS I’ve gone in the swings too. Yup. They’re that sturdy. I don’t swing for a LONG time but it’s fun!

This post was originally published in May 2013. Updated in December 2015.